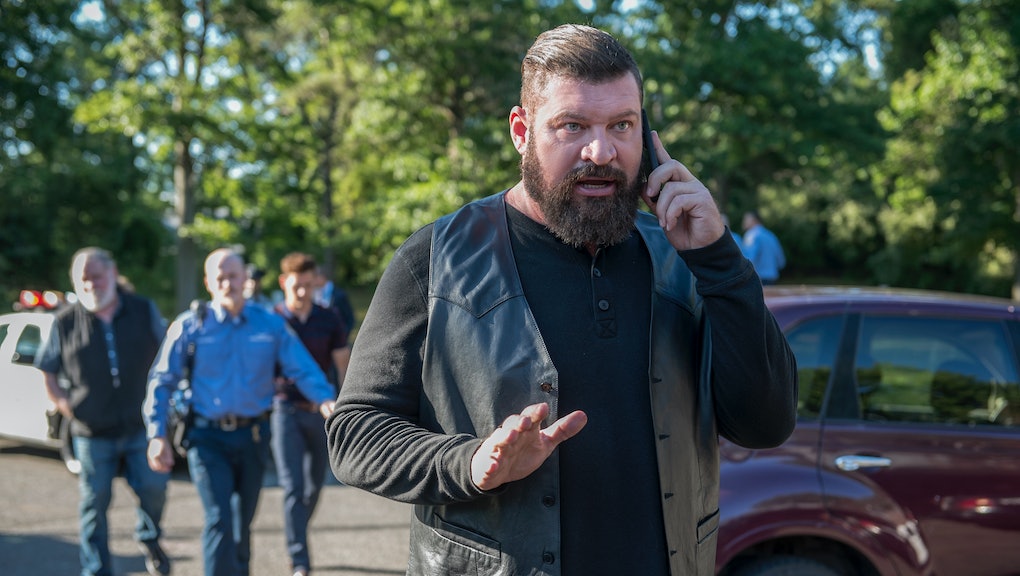 The Piscatella Problem: 'Orange Is the New Black' makes a homophobic misstep in season 5

Homophobia and transphobia are part and parcel of Orange Is the New Black. As character traits, they signify villainy or ignorance; as plot points, they heighten awareness. When Corrections Officer Humphrey tells Maureen that "lezzies go straight to hell," we're reminded that he's a sociopath. When Aleida calls Sophia a "he-she" and suggests she's violent because she was born male, we witness the effects of systemic ignorance. Now, the show itself has never been homophobic. Until season five came along.

Desi Piscatella, the head guard at Litchfield Penitentiary and the Big Bad of season four, was a decent villain. His torture of Red was terrible, but he justified it with a stubborn worldview: Inmates are prisoners, not people. He even said so in "The Animals," when he told the women, "You're criminals, and you deserve nothing," thus sparking a violent standoff which ended in Poussey's tragic death. He was shockingly brutal. He also happened to be gay.

Piscatella's casual acknowledgment of his sexuality in season four was a subtle sign of progress. "I have two beards," he told Piper when she tried to flirt with him. "The one on my face and the one I took to junior prom. Yeah. I like dudes.” As a villain, he shared equal footing with his straight counterparts: We didn't hate him because he was gay; we hated him because he was ruthless. Although his backstory of being sent to gay conversion camp elicited some sympathy, it didn't let him off the hook.

Still, the LGBTQ community rallied around the character. Brad William Henke, the six-foot-four former NFL defensive lineman who plays Piscatella, told Out in 2016 that gay men had approached him on the street to thank him:

"They say: 'Hey, man, thank you. I’ve never seen a character that I could relate to or be proud of.' Or dislike and like. It’s like: 'I hate you and I love you! You know why? Because it’s a person.'"

Even OITNB has acknowledged Piscatella's novelty. Early in the new season, Nicky spells it out by quipping, "Homos can also be assholes. Why are we hung up on the homo thing?" Pardon the crass language, but she's right.

But now we're hung up on it.

In episode two of season five, Red seeks to humiliate Piscatella in front of the prisoners by posting pictures of him competing in a table-setting contest. "That is one gay table," DeMarco says as she snickers about his pastime. If it weren't for Piscatella's sexuality, this would be a ho-hum, generically problematic sitcom storyline about emasculating a straight guy. (LOL, a manly man would hate being associated with table-setting!) But DeMarco knows full well that Piscatella is gay, and, due to her ignorance, views his hobby as a byproduct of his sexuality.

DeMarco wasn't laughing before, when Piscatella exuded authority and toughness, but now that he fits her mold of a stereotypical gay man, or "femme" gay man, he's a joke. This apparent loss of status is an opportunity for DeMarco to mock her former oppressor and find a little catharsis. But by asking viewers to laugh with and identify with DeMarco — "Hey, fans, here's your chance to make fun of that gay dude you all hate" — it's reinforcing the problematic assumption that femme gay men and their passions are inherently hilarious.

Piscatella later defends his hobby to Red and embraces his feminine side, but there's still a foul stench in the air. Henke's delivery here indicates that the scene is being played for laughs. Even when Piscatella's bro co-workers ridicule his craft and question his competence — underscoring how queered behaviors are disparaged by men in power — there's little room for sympathy. The show has already asked viewers to deride Piscatella's sexual identity by having us side with Red, and this tiny moment doesn't erase that.

Until now, OITNB has been a trailblazer in progressive ideology and LGBTQ representation. Nuanced queer women continue to share screen time with Laverne Cox's groundbreaking Sophia Burset, while the inmates of Litchfield excoriate toxic masculinity on the reg. In 2014, it even won a GLAAD Media Award for outstanding comedy series. Considering these lofty standards, you'd think it wouldn't be lobbing lazy homophobic insults for cheap catharsis. And yet, here we are.

Piscatella deserves to be mocked because, let's face it, he's a terrible person and he literally calls inmates animals. But by poking fun at his homosexuality, OITNB is stooping to his level. Worse yet, it's perpetuating the marginalization of femme gay men. While "straight-acting" gay men — as Piscatella was formerly perceived — reap many of the same social benefits as straight men, femme gay men continue to be overlooked and ostracized by men in power. This ingrained preference for masculinity is a direct result of pandemic misogyny. Even LGBTQ communities value "straight-acting" individuals, if the phenomenon of "masc 4 masc" dating profiles is any indication.

There's still much work to be done in the fight for LGBTQ equality, and OITNB should be making that work easier, not setting it backward. Fortunately, the show has at least two more seasons to course correct; and if it doesn't, then it could risk losing its critical standing and, potentially, some viewers. Regardless of what happens in future seasons, the decision to skewer Piscatella's sexual orientation is a creative choice that never should've been made in the first place.

Mic has ongoing coverage of Orange Is the New Black. Check out our main OITNB hub here.