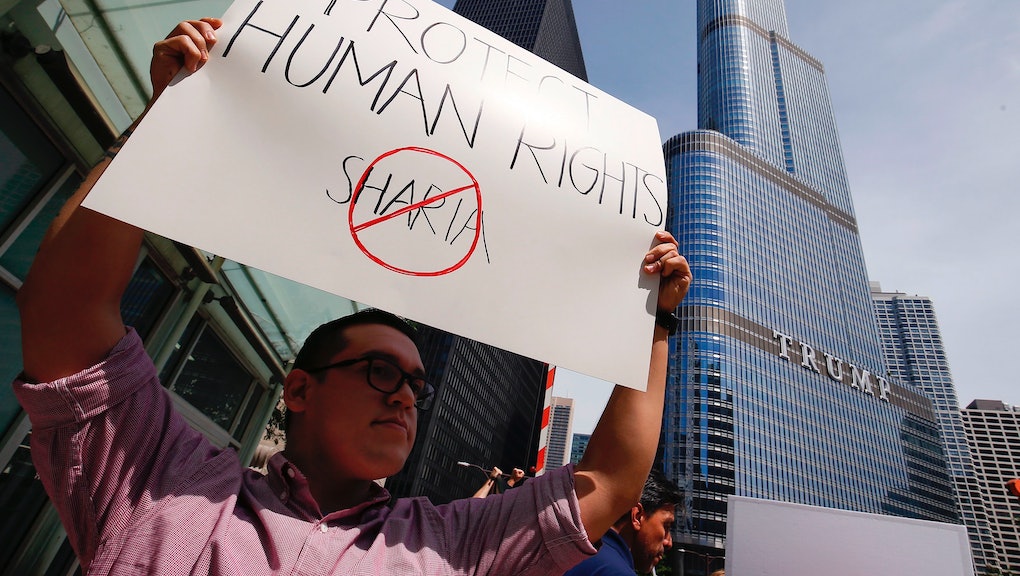 Anti-Islam activists staged a nationwide "March Against Sharia" on Saturday, gathering in cities around the country for events staged by far-right organization ACT for America.

ACT, which is often characterized as an Islamophobic hate group, attracted participants running the gamut from Christian extremists and IRL internet trolls to middle-aged suburbanites in Make America Great Again hats. Angered and clutching signs denouncing the Islamic religion, attendees at some of the rallies included white supremacists and anti-government militias carrying rifles and shotguns. In many locations, they were greatly outnumbered by counter-protesters and anti-fascist organizers.

Sharia is a set of guidelines for Islamic life, which in some countries is enforced as a theocratic rule of law but in many others is a legally nonbinding set of personal moral guidelines. In the eyes of anti-Islam activists, however, it has taken on the kind of sinister overtones normally reserved for fascist ideology and New World Order-style conspiracy theories.

The New York rally was headlined by Gavin McInnes, a former media executive who founded the far-right "Proud Boys" group, Mic's Sarah Harvard reported from the scene. As noted by the Washington Post, the "three dozen" or so anti-Islam protesters, which included members of white supremacist group Identity Evropa, faced off against a crowd "including labor activists, Jewish and Muslim protesters, and left-wing anarchists."

Members of the Oath Keepers militia attended for the ostensible purpose of providing security for the anti-Islam group. But shortly after giving an anti-sharia speech, the organization's New York vice president, Frank Morganthaler, had a heart attack.

Some held racist or bigoted signs, while others chastised the media. Members of the crowd told reporters they were not welcome. At least one of the speakers decried the media as "evil and demonic."

In Los Angeles, where 200 anti-sharia demonstrators faced a crowd of 100 anti-Trump protesters, the anti-Islam group smashed a car window and taunted others, the L.A. Times reported.

At the Minnesota State Capitol, fights broke out between 100 attendees and 300 protesters after "a few of whom wore camouflage and helmets, exited the Capitol and exchanged angry words with the counterprotesters," the Star Tribune reported. "Pushing and shoving then broke out on the Capitol steps." Police made at least seven arrests.

In Chicago, just 20 anti-sharia activists showed up to be yelled at by a crowd of 200 counter-protesters.

In Houston, a group of heavily armed anti-sharia marchers showed up at Hermann Park. The Houston Chronicle's Evan Mintz tweeted that some of the participants came ready for a fight in bizarre, improvised armor, but no one showed up besides "suburbanites with guns and internet weirdos."

Overall, the "March" gave the impression of a poorly organized event with a confused agenda. However, it still managed to attract hundreds of people across the country to show up for a frightening cause.

"We understand what Islam is, and we say 'no,'" Proud Boys member Pawl Bazile told the crowd in New York, according to the Post. "You’re in the land of Budweiser and bikinis, for God's sake." He added that anyone who didn't like that can move to Saudi Arabia or Syria.

"I don’t believe in having Muslims in the United States," Vanguard America spokesman Francisco Rivera added. "Their culture is incompatible with ours."