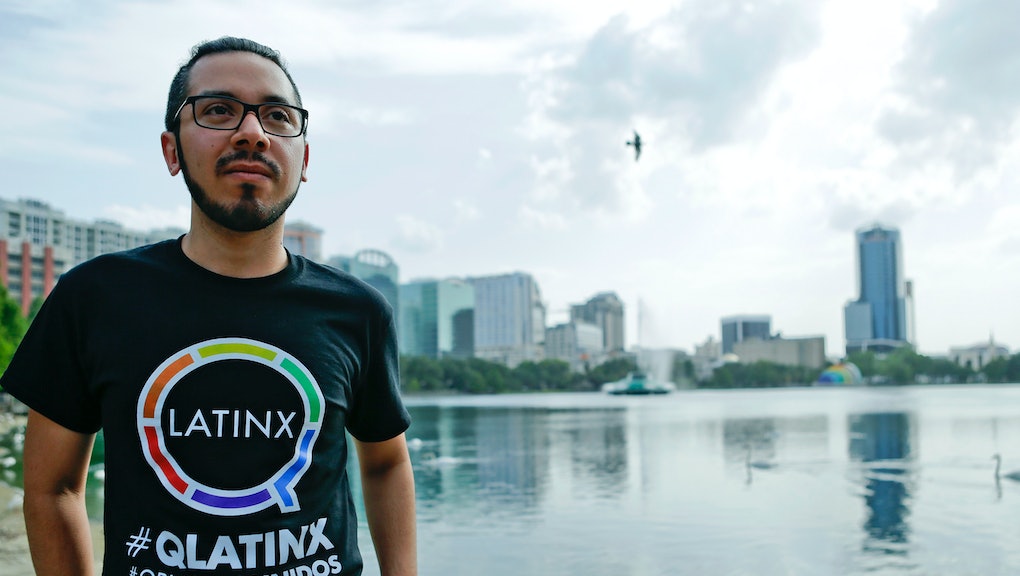 Earlier in June, Gustavo Bustamante addressed a crowd in front of Orlando's City Hall. The crowd gathered in support of the Trust Act, an ordinance to ensure the city of Orlando does not collude with federal immigration forces. Bustamante, who was an undocumented immigrant from Venezuela until gaining U.S. citizenship earlier in 2017, spoke about his own experience as an undocumented person living in the United States.

"The fight for LGBT equality is, in essence, the same as the fight for immigrant rights," Bustamante said to those attending. "We are all human beings. Human beings deserve respect."

As Bustamante spoke, he wore a shirt with the logo of the group QLatinx, an organization of queer Latinos in Orlando, Florida, that was formed in the wake of the Pulse nightclub shooting, which disproportionately affected the city's Latino population.

QLatinx was born out of a simple idea: Queer people of color in Orlando needed to be empowered. The group's founder, Christopher Cuevas, realized that the community at the center of the Pulse nightclub shooting had very little say in community decisions following the tragedy. The group, which he said is comprised of about 60 engaged members, was formed to empower queer people of color to become leaders and represent their community.

"There's a quote by Shirley Chisholm that I live my life by: 'If they don't find you a seat at the table, bring a folding chair,'" Cuevas said. "That’s how I see the work of QLatinx: We're bringing the folding chair until everyone is ready to include spaces for queer and trans people of color."

In order to get that work done, Cuevas believes it's essential to create spaces where people can feel comfortable and affirmed.

That's what made Kent Marrero feel like QLatinx was the right space to be in. Marrero's first meeting was a self-defense class with an outside instructor. The instructor accidentally misgendered Marrero. Others in the group noticed they had become upset and withdrawn. Together, they comforted Marrero and spoke to the instructor about what had happened.

"When I found QLatinx, it was an epiphany of what I was missing," Marrero, a genderqueer, non-binary Puerto Rican, said in an interview.

"The QLatinx members, they wanted to do something to make sure that it didn't happen again," Marrero said. "They genuinely cared about this stranger who came into their space."

Speaking up for Marrero was one example of the way the group works to create spaces where people can feel open, honest and vulnerable. Most meetings revolve around discussions of challenge topics — racism, relationships, religion and more. Cuevas said this derives from indigenous "heart circles," in which speaking honestly and listening with respect are vital tenets. For people to participate, they have to feel comfortable with the larger group.

In a phone interview, Bustamante said that the group has allowed him to have intimacy with others in the queer community for the first time. That, in turn, drew him out of a self-imposed isolation after the Pulse tragedy. During that time, he dove into physical activity — running, playing frisbee — to feel more alive and avoid conversation.

"I didn't talk to anybody about it," Bustamante said. "I really disconnected myself. So, QLatinx was a way to connect myself maybe for the first time ever."

He added, "It made me want to feel visible."

That desire to be visible is central to QLatinx's mission. Through these conversations, Cuevas attests, queer people of color can empower themselves to think of their life experiences — like Bustamante's experience as an immigrant — as valuable.

"We need people to start occupying decision-making spots in our community," Cuevas said. Cuevas hopes QLatinx can help build an infrastructure of queer people of color who can advocate for their own community. "We're being excluded. It's just not right."

"Our voices have value and are meaningful," Cuevas said. "The people in our community know how to effect change."