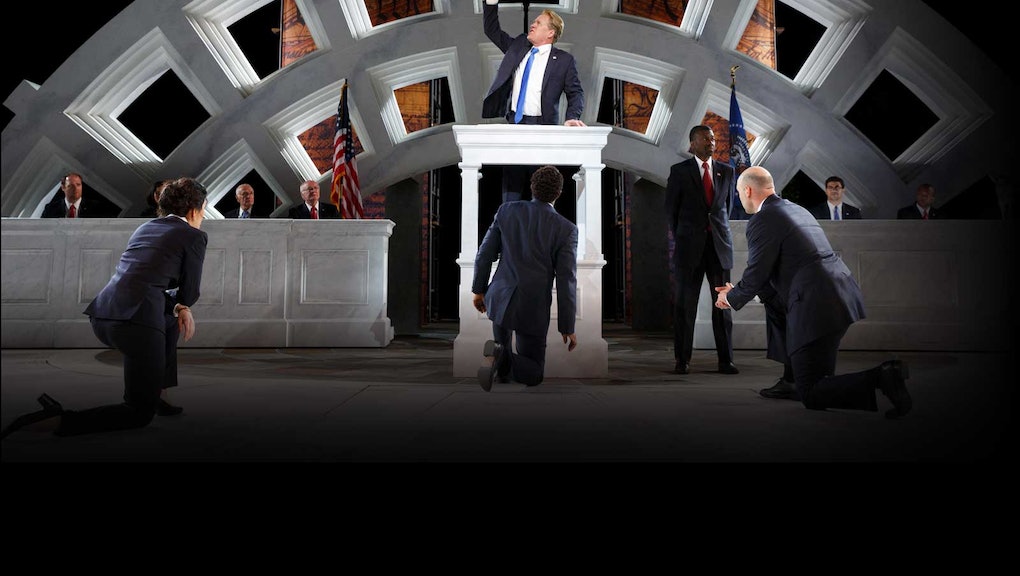 Since Trump's election, conservatives are outraged on behalf of Trump — at Kathy Griffin, at the New York Times and at various others who offend the sensibilities of the president's fans. Their next target: free Shakespeare plays.

Corporations like Delta Air Lines and Bank of America are dropping their charitable donations to the Public Theater in New York City after Fox News drummed up outrage over a summer production of Julius Caesar.

In the production, characters are stylized in modern garb, and the portrayal of Caesar, who is assassinated in the play, has drawn comparisons to President Donald Trump. The outrage is over what conservatives assert is portrayal of the president being killed.

The production of Julius Caesar is part of New York's celebrated Shakespeare in the Park series, which puts on plays featuring celebrity talent for free. By pulling funding from the Public Theater, they stop subsidizing access to world-class performances for poor and working-class people.

Delta was the first to pull their sponsorship of the Public Theater, spending Sunday tweeting at alleged customers that they would be pulling their funding.

"Their artistic and creative direction crossed the line on the standards of good taste," Delta tweeted around the clock. "We have notified them of our decision to end our sponsorship as the official airline of the Public Theater effective immediately."

“The Public Theater chose to present Julius Caesar in such a way that was intended to provoke and offend," Bank of America's public statement, posted to Twitter, said.

Some were quick to point out that Bank of America has a history of backing controversial practices: The bank, detractors noted, still finances the private prison industry, and before the financial crisis, it issued over $640 billion in mortgage-backed securities.

Others noted that Julius Caesar is not a play that advocates assassination — the play largely takes place after the assassination, outlining how the murder plot backfires ruinously for those involved. The show's director, Oskar Eustis, published a special note on the Public Theater's website reminding the audience that the show is about how fragile democracy is, and that the institutions we once thought impermeable can be "swept away in no time at all."

"Julius Caesar can be read as a warning parable to those who try to fight for democracy by undemocratic means," Eustis said. "To fight the tyrant does not mean imitating him."

A brigade of conservatives continue to target other Public Theater benefactors with the hopes of starving the group of funding. Former Arkansas Gov. Mike Huckabee added his voice to those pressuring American Express to pull arts funding, putting the word "play" in scare quotes.

The outrage, it would seem, is selective: In 2012, New York also hosted a production of the same play, only with a portrayal of Caesar that drew comparisons to then-President Barack Obama, facing down an Occupy Rome protest.

The American Conservative called it "riveting" with "a fine sense of rhythm."