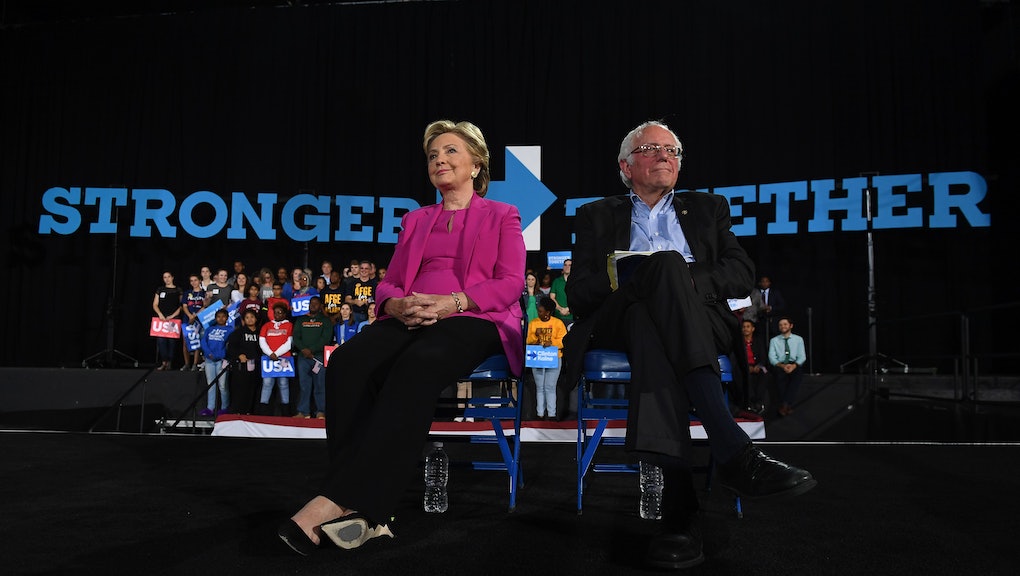 CHICAGO — In the era of President Donald Trump, the Bernie Sanders wing of the progressive left has one message for Democratic Party leaders in Washington: Don't take us for granted.

Over the weekend, progressives from around the country gathered for the largest grassroots progressive political conference in the country. In only its second year, the People’s Summit has drawn around 4,200 attendees, eclipsing more longstanding progressive conferences like Netroots Nation.

Attendees of the conference, which was organized by a coalition of Sanders supporters, represented an increasingly distinct wing of electoral politics — the Sanders left. More than a year after Hillary Clinton defeated Sanders in the 2016 Democratic presidential primary, this coalition remains a sizable and powerful force within the left. And they still have not forgiven Clinton or the party for losing the election.

“The frustration is going to linger until the party transforms,” Winnie Wong, cofounder of People for Bernie and one of the event organizers, said in an interview. Though Wong noted the mood among attendees was more about enthusiasm than grievances, she did not deny the deep divide that abides within the party.

“I was a lifelong Democrat up until July 2017,” said Leisa Duncker, one of the many attendees frustrated with the Democratic party leadership. “I will not return until I feel they understand the reason they lost the election.”

The defiant mood of progressives at the conference showed the extent to which the left is now moving along two separate tracks. Just last month, the liberal think tank Center for American Progress, an organization founded and run by members of the Clinton inner circle, held its own conference that many saw as an attempt to start auditioning candidates for the 2020 presidential election. Emerging stars of the party, like Sens. Cory Booker, Elizabeth Warren and Kamala Harris were invited to give speeches and, presumably, test their potential 2020 appeal.

The contrast between the two conferences illuminates the different ways in which the two factions envision the future of the progressive movement. For starters, the CAP event was held in Washington, D.C.’s upscale Four Seasons Hotel and was invitation-only, though anyone could pay $1,000 to attend the conference's after party. In contrast, attendance fees for the People’s Summit were set on a sliding scale from $45 to $300 based on the income of the attendee. And according to organizers, almost all of the money from ticket sales was used to fund scholarships for individuals around the country who could not afford to pay their own way to Chicago.

Despite the CAP conference's long list of progressive bold-faced names on the bill, event organizers declined to invite the most popular politician in the country, Sanders, telling the Washington Post that he hadn’t been invited because he had already run for president and they were trying to “emphasize a new generation.”

“The CAP people had a conference that was invite only, largely for their donor class,” Wong said. “It’s illustrative of how out of touch establishment Dems are with how the influence of how big money, corporate money in our political system has led to them losing seats all across the country.”

Wong also pointed to the many young progressive organizers in attendance at the People’s Summit: “These millennials are not going to buy that CAP juju. They just can’t reach the young people. So what they're actually doing is just creating another level of electoral obstruction for young people.”

On the heels of the U.K.’s recent election, where the Labour Party outperformed expectation thanks in part to an unexpectedly large youth turnout, the support of young progressive activists is more coveted than ever before. But if the Democratic Party hopes to galvanize that energy in 2018 and 2020, they’ll have to reconcile some of the deep mistrust that still exists between the left’s two camps.