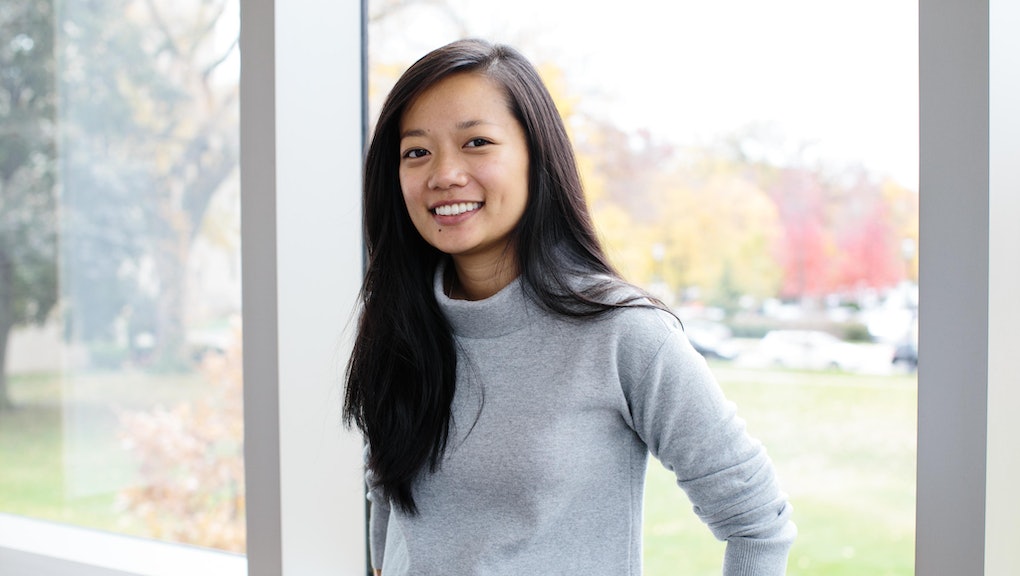 Meet Elaine Chen, the woman behind the RompHim

At 10 a.m. on May 15, Elaine Chen and three classmates sat with "nervous excitement" as they prepared to launch the product they'd devised during the last few months of senior year. Did she have any idea that by 10 p.m. the RompHim would become the summer's most squawked-about item? "Not at all."

It took Chen — along with her fellow Kellogg School of Management co-creators Alex Neumann, Chip Longenecker and Daniel Webster-Clark — until the day's end before she realized the product they had launched via Kickstarter was torpedoing toward full-on cultural phenomenon. "We wanted to create a product that would be a conversation starter," Chen recalled an interview, "but this was totally insane."

Not 24 hours after its internet debut, the RompHim was everywhere: Vogue, Elle, GQ, Esquire, Washington Post, CNN, Time. It was trending on Twitter and even showing up on local news.

A week later, the Kickstarter campaign had to be terminated due to overwhelming demand. That was no problem though; the creators had long passed raised their goal of $10K. In fact, they far exceeded it, raising $355K.

It's fair to say that RompHim, like "on fleek" and Ken Bone before it, was rapidly accepted into the lexicon. A Google search of the term that did not exist before May 15 now brings in over 786,000 results.

"None of us had any experience in the industry prior, so we set out to do it as a passion project," Chen, one-quarter of the RompHim's design collective, ACED Design, explained. The stakes were minimal, since the four were not funding the project, instead using Kickstarter and hoping for funding through word of mouth.

"That way" she's referring to has to do with criticism hurled at the RompHim for the unnecessary gendering of a garment that is, at its core, without gender. "Some of the criticism is fair," Chen admitted. "By no means were we trying to make some crazy statement on gender. We just wanted to create a fun summer piece that anyone who might be interested in expressing themselves through fashion in a different way could do."

Another criticism: the promotional images, which to some evoked more of a Justin Timberlake/Andy Samberg SNL digital short vibe than the intended earnestness. "These are all guys that are my friends, they're just genuine, down-to-earth guys, not super-fratty bros," Chen said, explaining that the team sat down immediately after the images began making a stir, all in agreement on wanting marketing materials that portrayed the brand to be "as inclusive as possible."

"This is obviously brand new territory for us to be navigating in public waters, but I think we've quickly learned to become more objective about how we present our future images and wording," Chen explained, saying additional promotional images — as well as new styles of the RompHim — were coming soon. Plus, Chen said, once the RompHim begins shipping, there should be plenty more images, once guys starting posting photos of themselves in it.

And speaking of coming soon, the RompHim will finally begin shipping in early August. In the meantime, the team is hard at work ramping up production output to fulfill the 4,000 orders already completed. Once these ship, Chen says they will begin taking new orders.

As for advice for other creators who might find themselves in a similar position?

"Take it all in stride," she said. "You're not going to please everyone at the end of the day and that's okay," she said, adding, "Your product is never going to be for everyone."