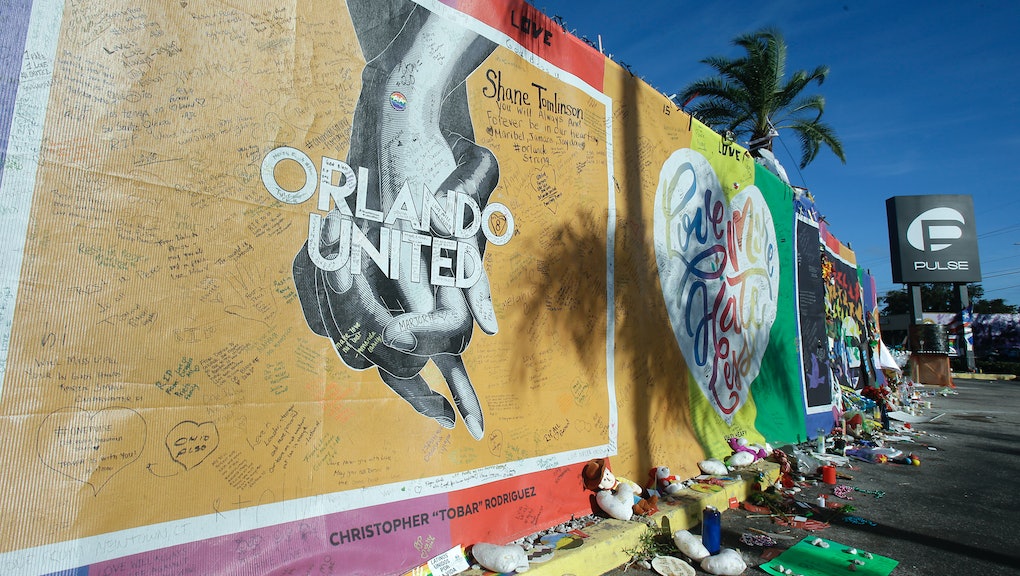 Pulse Nightclub: Here's how Orlando is honoring the victims one year later

One year after the fatal shooting at Pulse nightclub in Orlando, Florida, the Central Florida community came together on Monday to honor the victims through Orlando United Day.

Orange County, Florida, declared June 12, 2017 as Orlando United Day in honor of those affected by the attack. The commemorative day, which should be celebrated with "acts of love and kindness," is "dedicated to honoring the memory of the 49 innocent Pulse victims, supporting survivors and recognizing the compassion and love that was displayed by the Central Florida community following the tragedy."

Members of the Orlando community gathered at Pulse nightclub overnight for a vigil marking the exact time of the nightclub attack one year earlier. Though the 1:45 a.m. event was open only to family and friends of the victims, hundreds more gathered outside the nightclub's fence to pay their respects, the Orlando Sentinel reported.

Forty-nine supporters dressed as angels arrived at the vigil to surround the private ceremony, returning to Pulse after previously working to shield mourners during the attack's immediate aftermath, CNN reported.

"What you have endured in the past year seems like something only you can understand,” Pulse owner Barbara Poma said to the people within the club's fence, according to the Sentinel. “Except here tonight, you are surrounded by hundreds of others who are like you.”

On Monday morning, members of the community, including the angels, convened again for a ceremony honoring the legacy of the 49 victims and the first responders who came to their aid.

The ceremony included speeches by community leaders and elected officials, along with performances by Janelle Morales and Willie Colón, who were friends of one of the victims, and the Orlando Gay Chorus, which performed such affirming songs as Cyndi Lauper's "True Colors," "Fight Song" by Rachel Platten and "No Day But Today" from the musical Rent.

"This morning, we return to Pulse," Orlando Mayor Buddy Dyer said in a speech. "But we are not here to relive the horror of that day. We're here for a far greater purpose. We're here to remember the innocent lives that were lost, we're here to honor them, along with their families and their loved ones, and we're here to salute the survivors."

"In the face of the most unimaginable tragedy, our community rallied behind a simple ideal: that through the good times and through the bad times, we are one Orlando," Dyer continued. "And being one Orlando means being a place where diversity and inclusion are strengths. They're the bedrock of our community."

As part of the ceremony, all 49 names of the victims were memorialized by being read aloud. The event also honored the first responders that aided in the aftermath of the attack, bringing many of them onstage for a special presentation of handmade paper flowers to recognize their individual contributions.

"We are Orlando United, and we are the best of humanity."

Orlando United Day will continue Monday night, as Floridians gather at Lake Eola Park Amphitheatre at 7 p.m. for Orlando Love: Remembering Our Angels, a one-year remembrance ceremony open to members of the public.

At 10 p.m., there will also be a community gathering at Pulse with prayer, live music, dance and time to reflect on the horrific attack.