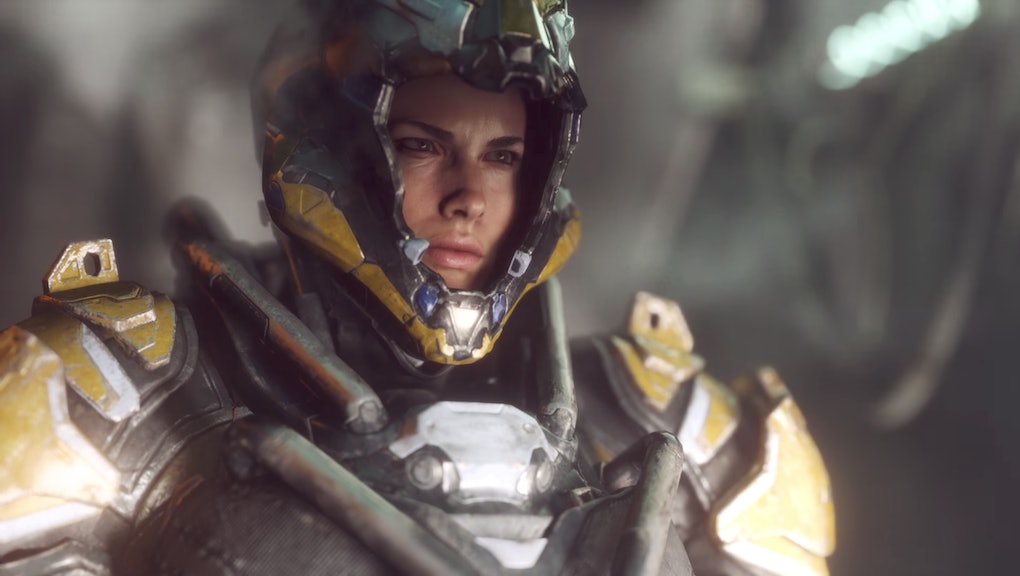 The reveal of BioWare's gorgeous new game Anthem should have generated nothing but excitement, but for some Mass Effect fans, it was like seeing their ex with their sickeningly hot new boyfriend. Except, you know, if that boyfriend was wearing an Iron Man suit identical to your own — but much, much sexier.

Essentially, the reveal of Anthem is the final straw for a lot of Mass Effect fans upset about the way the series' newest entry, Andromeda, turned out. For these fans, seeing the level of polish that Anthem already has only serves to remind them how rough Andromeda is by comparison — despite the fact both games come from the same company.

Mass Effect: Andromeda — which was in development for five years — should have been a home run. The original Mass Effect trilogy is one of the most critically beloved series of all time, and its fan base is astoundingly passionate. But when Andromeda finally came out in March of this year, it noticeably lacked a level of polish and cohesiveness that fans expected. In fact, BioWare is still in the process of releasing a series of patches aimed at bringing Andromeda up to snuff.

Many fans have traced Andromeda's roughness to BioWare's decision to put a relatively new team in charge of Andromeda's development, rather than its so-called "A team" based out of BioWare's headquarters in Edmonton, Canada.

Instead of working on Andromeda, this seasoned team got to work on Anthem, leading some Mass Effect fans to feel like their favorite franchise was left to rot. (If you want to read more on the troubled development of Mass Effect: Andromeda, Kotaku's in-depth report is fascinating.)

Those feelings are seemingly amplified by the fact that Anthem and Andromeda overlap quite a bit in terms of their sci-fi settings and blend of RPG and third-person shooter styles. It's as if Anthem represents everything that Andromeda could have been in a more perfect world — and the fact that both are made by the same company makes that a harder pill to swallow.

• "Anthem was clearly BioWare's priority over ME:A," posted by gatorfreak_luke62.

• "The gameplay preview for Anthem just aired at E3. It looks like everything Andromeda should have been," posted by Oseirus.

• "If you're upset about the Andromeda/Anthem situation, speak with your wallets," a post whose contents has since been deleted.

Is there anything to the idea that BioWare neglected Andromeda in favor of Anthem?

Of course, the implication that BioWare intentionally left Andromeda to die is almost certainly untrue. Huge teams of developers worked for years on Andromeda and made it the best they possibly could with the resources they had. Still, when you look at the two games side-by-side, it's pretty hard to look at Anthem and not wonder what Andromeda could have been under better circumstances.

For example, here's an example of Andromeda's infamous facial animation — most of which has since been polished:

And here's what the facial animation in Anthem looked like at E3:

It's also worth noting that BioWare's Anthem demo is what's known as a "vertical slice," a distillation of what it hopes the final game will look like. Whether BioWare can actually scale that stellar face animation to the entire game is a whole other question, especially since games have a habit of not quite living up to their E3 reveals.

Regardless, Anthem looks like it's shaping up to be a promising game — but it's still hard to know whether it can win back Mass Effect fans who feel burned by Andromeda. Anthem is scheduled to release in fall of 2018.