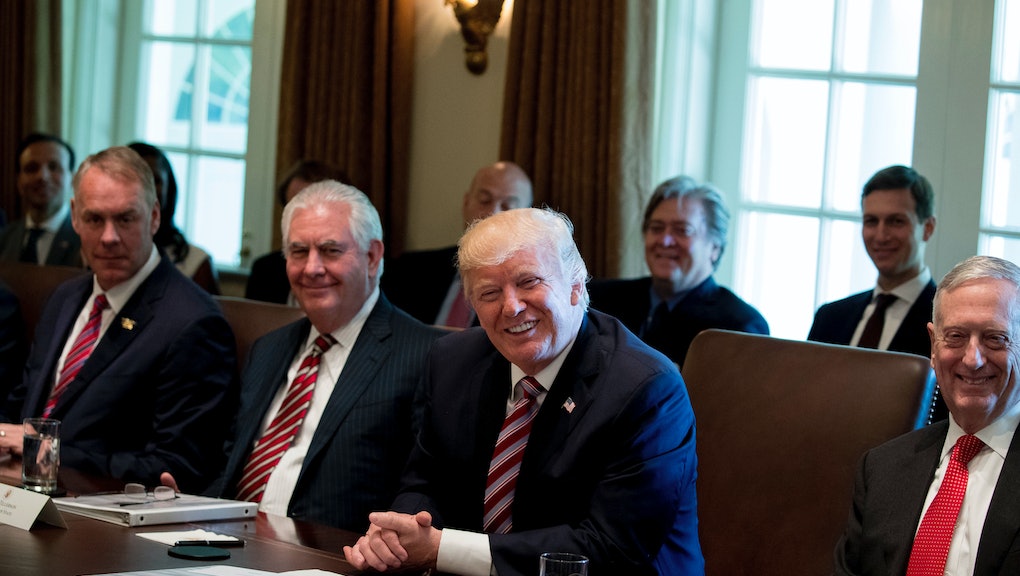 President Donald Trump held his first full Cabinet meeting on Monday, in which he not only declared his presidency to be one of the most productive in history, but made every member of his Cabinet go around the table and praise his policy agenda.

Members of the Cabinet went to varying lengths to praise Trump.

“It is the greatest privilege of my life to serve as vice president," Vice President Mike Pence offered, according to a Washington Post account of the event. Trump, the vice president continued, is "keeping his word to the American people."

Energy Secretary Rick Perry praised Trump for withdrawing the U.S. from the Paris climate agreement: "My hats off to you for taking that stand and sending a clear message around the world.”

Health and Human Services Secretary Tom Price also jumped at the opportunity to lavish his boss with praise: “I can't thank you enough for the privileges you've given me and the leadership that you've shown."

But the most effusive review came from White House chief of staff Reince Priebus, who thanked Trump "for the opportunity and blessing that you've given us to serve your agenda."

The story ripe for Democrat mockery, Senate Minority Leader Chuck Schumer (D-N.Y.) jumped at the opportunity, posting a video of his own meeting in which his staffers praised him in a similar fashion.

Schumer's staffers each told Schumer how great of a job he was doing, until a final staffer quotes Priebus' praise verbatim, leading the entire table to explode into laughter.