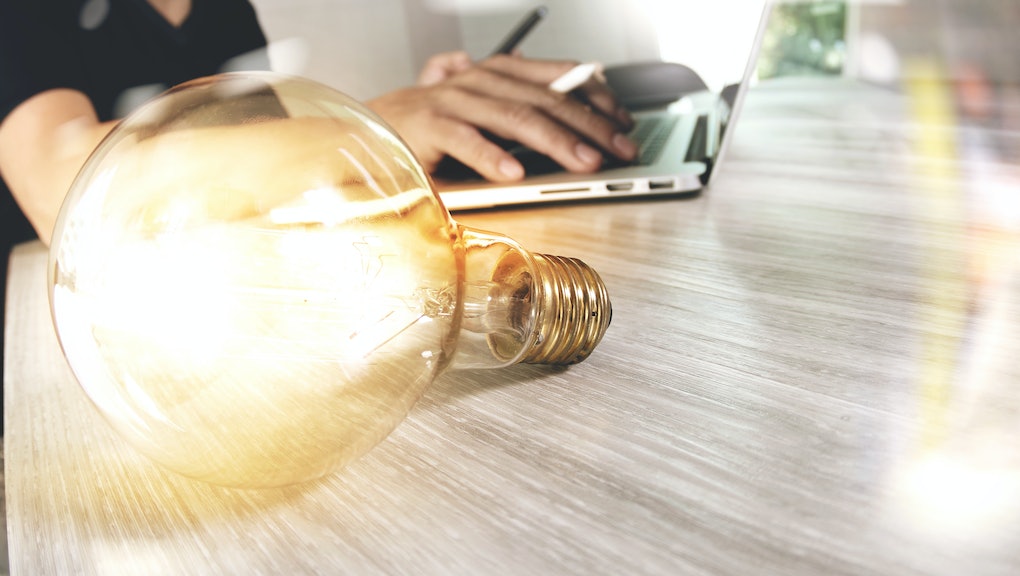 Matthew Cummings' glass company went viral at an awkward time: while he was in the middle of managing a pop-up shop at a brewery event. "Etsy’s app used to have a noise when you sell something, a little cha-ching," Cummings said. "All of a sudden my phone starts cha chinging ... and I’m trying to mute it."

Cummings' Pretentious Glass Company — a tongue-in-cheek name inspired by his friends' ribbing — first started as a small side-business to supplement his earnings as a sculptor. Even respected sculptors, he explained, typically make all their income from a handful of gallery shows each year. His abstract glass sculptures are in prestigious institutions like the Speed Museum in Louisville, Kentucky, but it is still a stressful and inconsistent way to earn a living.

"I'll sell like six months of work in one evening in Chicago, and then I wouldn't sell anything for three months," he said in an interview. "So all that financial fluctuation leads to emotional fluctuation."

Finally, in 2012, he shifted into more practical work, making custom beer glasses sized with hand measurements to fit "like a glove." After FoodBeast's story about him was picked up by the Huffington Post, Cummings' humble Etsy store quickly racked up 5 million views: "It immediately went from being a side hustle to [me] doing everything I could to keep up with demand."

Now, Cummings said, he has expanded his glass company into a full-time studio — with three full-time employees and his own brewery attached.

Of course, not everyone can count on going viral to make their dreams of full-time entrepreneurship come true. But there are many elements of Cummings' story, from his dogged work ethic — 100-hour weeks were the norm — to his careful research ahead of time, that are typical of entrepreneurs who successfully transform down-time projects into full-time ventures.

Want to turn your gig into serious cash? Read on for seven smart moves that successful side-hustlers-turned-startup-CEOs tend to make.

1. They find the right time to make the leap.

"On everyone's Instagram account, they're the CEO of something," Frasier said. "A lot of people think they have a business because they sold a T-shirt. That's a hobby. A business is when you know you're going to have people coming in, and you can predict it."

Other entrepreneurs and coaches consulted by Mic agreed.

"There is a lot of emphasis on this entrepreneurial culture and how everyone should be an entrepreneur and there's something wrong with you if you have a job," said Chris Guillebeau, a coach and host of the Side Hustle School. But you shouldn't quit your job until "your income is such that, maybe it's not equal to what your job is, but you should be able to see a trajectory to where it's feasible. It's not just an interesting an idea, it's a profitable idea."

One telling joke about entrepreneurship, Frasier noted, is that it's like jumping off a cliff and building an airplane on your way down. Identifying your business model — and making sure you have enough emergency savings if the venture fails — will make the jump less manic.

2. They find unusual ways to self-promote.

Even a truly great product will fade into oblivion if people don't hear about it, said John Henry, a Harlem, New York City-based venture capitalist and podcast host with more than 30,000 social media followers. "When you're growing your business, assuming you're solving a problem, you want eyeballs," Henry said. "Without content, you're not in the conversation ... as you put out little bits of content, you start to come to life."

Founders may see written or video content posted online as superfluous — certainly compared with their actual product or service — but this is a mistake, Henry said. It's only a matter of time before competitors emerge. Then, you want to be the company that's more popular, likable or accessible.

You don't need anything fancy or even a team to begin creating content. Most entrepreneurs, for example, blog and write on social media platforms and entrepreneur-focused platforms like Product Hunt or Medium. If you're serious about starting a company, you might consider posting on these platforms every day, or at least once a week.

When Tracy DiNunzio decided to launch Tradesy, a marketplace for second-hand designer clothes, she knew she would have to be smart about finding people whose skills complement hers. "I had no experience in coding, design, marketing," DiNunzio said. "It was overwhelming, so I dove in on marketing and growth, because if you don't have a plan or a way to get customers, then there's no business."

DiNunzio decided to rent her bedroom out on Airbnb and use the savings to hire some developers to build the first version of her site — but she continued to keep options open and use contractors for the first three years, even after she turned her first profit. "Over time I started finding contractors that were really reliable," she said. "The lesson there is to call references."

Reputable contractors typically have a few references that they provide, but those are often friends. DiNunzio recommended combing a firm's website and LinkedIn, and then reaching out to their clients for a reference check directly.

Entrepreneurs typically work about 63% more hours per week than the typical worker, according to one U.K. study — and the typical worker already works a lot. In your business's early days, you might expect to work even more; that's why automation is your friend.

"Automation is key. It's the best thing in technology for people with side hustles," Frasier said. "If you have a buffer account, you could be tweeting all day without ever touching the phone," for example.

Automation can do more than share social media posts. Many payments processors automate accounting, for example, and you can robotize a good deal of finding and communicating with customers. You can automate your schedule — with an artificial intelligence-enabled assistant — and even the process of getting incorporated.

Of course, these services will cost money, but by automating jobs you find most annoying or cumbersome, you free up energy for more important tasks.

Entrepreneurs often talk about the importance of having mentors. Why? For one, first-time entrepreneurs understandably make lots of mistakes. Having someone who's seen the ups and downs of launching a business means access to valuable experience — and networking introductions.

Darcy Everett quit her city government job in January to launch Flatcraft Breads, a shop that sells wraps, naan and other flatbreads online and at farmers markets. In a phone interview, Everett said she went to three different places in search of mentors: her city's small business administration, Facebook groups for entrepreneurs in the North Carolina area and SCORE, a nonprofit that matches young founders with retired small-business owners.

"I'd say the biggest benefit for me was on the financial side; I had no accounting background," Everett said. "But [my mentors had] all these templates: profit and loss statements, break-even analyses. And they're basically blank documents that you can plug your information into: what you hope to make, what your raw material costs are."

Everett had some bases covered, with degrees in interior design, a master's in sustainability and a background in city government — which meant she was easily able to get licensed. But a big part of making her business profitable, she said, was figuring out the right amount of raw ingredients to buy: That required getting someone to help her crunch the numbers.

6. They protect their ideas.

An important part of getting your idea off the ground is making sure no one steals it. Frasier said he had helped build a gaming and media site, and then one of his partners decided to shut him out. When Frasier went a week without internet, he logged back in to find that passwords had been changed.

"Be mindful about the people that you're sharing your dream with and your information with," Frasier said. "They were only able to do what they did because they were able to have access to everything."

When Frasier restarted his business under a new name, the Koalition, he said he decided to be more careful, and registered as a limited liability corporation from day one. LLCs protect your personal assets and are among the simplest ways to incorporate a company, though costs vary state to state. In Nevada and Delaware, popular states to incorporate, you can register an LLC for as little as $300.

Had Frasier registered the original company's name as a trademark, he might also have been able to threaten his former partner with legal action. If you think your idea qualifies as an invention, you might want to consider patenting it, which will give you the exclusive rights to produce your product for certain amount of time, generally 20 years. This requires compiling documentation about how your product works and what makes it new.

7. They know the role of luck in success.

Entrepreneurs usually get lucky. Cummings' Etsy page just happened to go viral, for example, and Henry's laundry business took off because his doorman job gave him access to contacts in the entertainment industry. But it's not easy to recreate such circumstances.

One challenge? It's difficult to tell earned success from serendipity, said the Side Hustle School's Guillebeau. "Try to be cognizant of the role of luck," he said. You want to make sure your model, and not just coincidence is "at least partially responsible" for your success.

To illustrate his point, Guillebeau told a story about a military veteran who began coding and blogged about the process. He signed up for an affiliate program — when a blogger collects a cut of business proceeds earned from clicks through links. For months, the affiliate program yielded nothing, but after a year a $13,000 check arrived in the mail. One single firm clicked through one of his links and ended up doing a $130,000 buy with that company — yielding the veteran a five-figure lump payment. Though his success continued, he did not quit his day job, Guillebeau said.

"It was a huge, huge success for him, in part due to luck," Guillebeau said. "If he hadn't actually started the blog, if he hadn't signed up for the affiliate program, it never would have happened. ... But he never actually quit his job, because he realized [his success] was outside his control."

At the end of the day, what separates an entrepreneurial venture from a part-time job, he said, is how much control you truly have: Could you sell the business to someone else, for example, or have someone run it for you while you took a vacation?

That's the difference between driving for a ride-sharing company, Guillebeau said, and running your own company. The sooner you achieve a degree of control over your business and income, the sooner you can quit your day job — and actually take your side-hustle full-time.