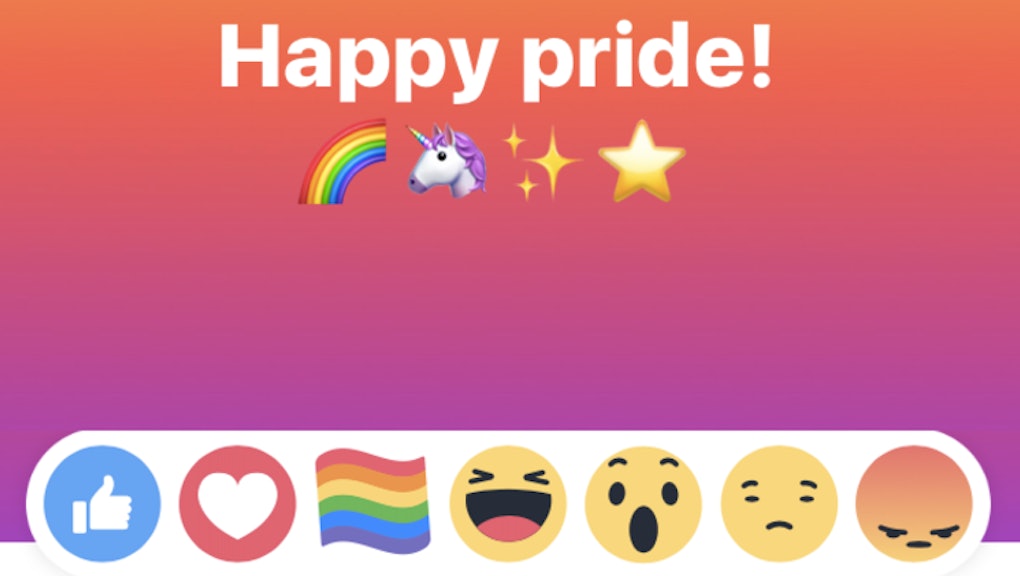 How do you get the rainbow reaction on Facebook? Here's how to use the pride flag.

June is LGBTQ Pride Month. This year, Facebook has rolled out several features to help users show their support for the LGBTQ community.

"We're excited to unveil more ways than ever before for people to show their pride and support for the LGBTQ community on Facebook," Alex Schultz, VP & Executive Sponsor of pride@facebook, said in a blog post.

The social media giant announced users can update their profile pictures with rainbow frames; play around with Pride-themed masks and frames via Facebook Camera; use Facebook Fundraiser to create or donate to a LGBTQ cause; enjoy Pride-themed stickers, frames and effects in the Messenger camera; and use stickers and a rainbow brush on the Facebook-owned Instagram app.

And there’s even a limited-edition Pride Reaction — a rainbow flag emoji — alongside the six permanent emoji reactions: Like, Love, Haha, Wow, Sad and Angry. The activist that developed the rainbow flag as a mark of LGBTQ pride in 1978, Gilbert Baker, died in March.

"When you choose this temporary rainbow reaction, you'll be expressing your 'Pride' to the post," Schultz said.

You won't get access to the Pride-themed Facebook reaction automatically. In order to use the temporary emoji, you have to unlock it by clicking "like" on the LGBTQ@Facebook page, according to Facebook. The rainbow flag emoji will reportedly be available on the platform until the end of June.