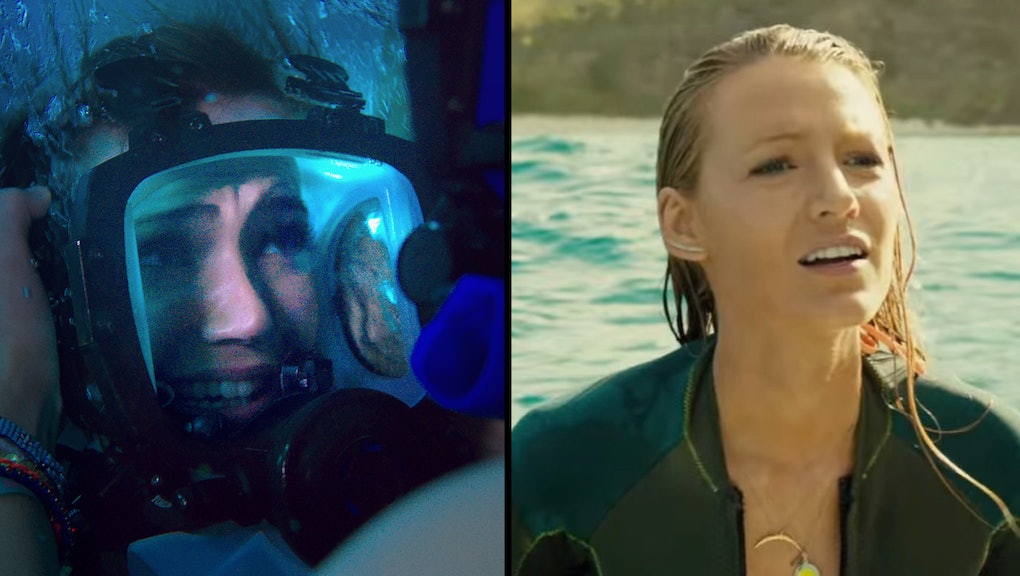 On the surface, The Shallows and 47 Meters Down look like relatively similar riffs on the same idea: Young, female star plays woman attempting to survive shark-infested waters. Sure, there are some differences. Blake Lively's heroine Nancy is flying solo against one shark in the former, while Mandy Moore's Lisa fends off more sharks and has company in her sister Kate, played by The Originals star Claire Holt, in the latter. But overall, you're looking at the same formula here — one that should, in theory, produce similar results.

The actual films, on the other hand, couldn't be farther apart on a qualitative level. While The Shallows was a surprisingly fun, action-packed thriller, 47 Meters Down is a dirge of a horror film, one that only provokes reaction when it unleashes an incredibly unfair twist on its protagonist.

(Editor's note: Spoilers ahead for both The Shallows and 47 Meters Down.)

Lisa and Kate don't get many breaks in 47 Meters Down. Upon Kate's insistence — and against every worry-filled bone in Lisa's body — the two go on a caged encounter with sharks that goes terribly wrong. The crane holding them just a few meters below the water breaks, and they fall to the ocean floor. (Guess how many meters down that is.) Every time it seems like they might be saved, something goes terribly wrong, climaxing with a shark killing Kate and leaving Lisa on her second air tank and no way out.

The movie turns around when Lisa, who so far has been a fairly passive, whiny protagonist, learns Kate is still alive. She acts decisively, making big moves and successfully saving not only herself, but her sister as well. It's a hard-fought battle, and the two girls get severely injured, but they make it to the surface.

And then it turns out that it's all a hallucination. The second air tank causes Lisa to imagine things — explained in the movie that switching to a second air tank causes such delusions — and she invents an entire heroic escape for herself. In reality, Kate is still dead, and Lisa is saved by the Coast Guard, with seemingly a good deal of brain damage.

It's a bummer ending that makes the last 30 or so minutes of the film a giant waste, one that's unbelievably cruel to Lisa as a character. Essentially, director Johannes Roberts takes her happy ending and slams it in her face. If the character had done anything wrong, this punishing turn might make sense. Instead, it comes across as sadistic.

Compare 47 Meters Down's ending to the triumphant final act of The Shallows. Surfer Nancy gets hit with about as many setbacks as Lisa and Kate after winding up stranded and hunted by a shark, but continually draws upon her medical school knowledge to craft impressive solutions, like stitching her own leg injury with a necklace chain. The Shallows essentially presents a survival puzzle to Lively's protagonist, and the thrill is in watching her figure it out.

In particular, Nancy's actual showdown with the shark is tremendous, involving shooting flares at it, practically lighting the ocean aflame, and eventually killing the shark by tricking it into impaling itself on an anchor. She lives, and it is in her survival that The Shallows truly transcends any inherent "Blake Lively in a shark movie" camp value and becomes great. Director Jaume Collet-Serra knows what a victory this is, and he presents it accordingly.

Nancy makes herself the hero of her own story; Lisa is maliciously proven to be helpless. These movies' relative levels of success absolutely come down to this difference. Frankly, the technical elements in 47 Meters Down are a bit better than those in The Shallows, down to far superior sharks. But all that flourish means little when 47 Meters Down's story is so inferior.

47 Meters Down isn't a total loss — Moore is good as the protagonist, particularly during the hallucination — but frankly, you'd be better off just watching The Shallows, even if you've already seen it. That's the kind of shark movie we need more of in cinemas.