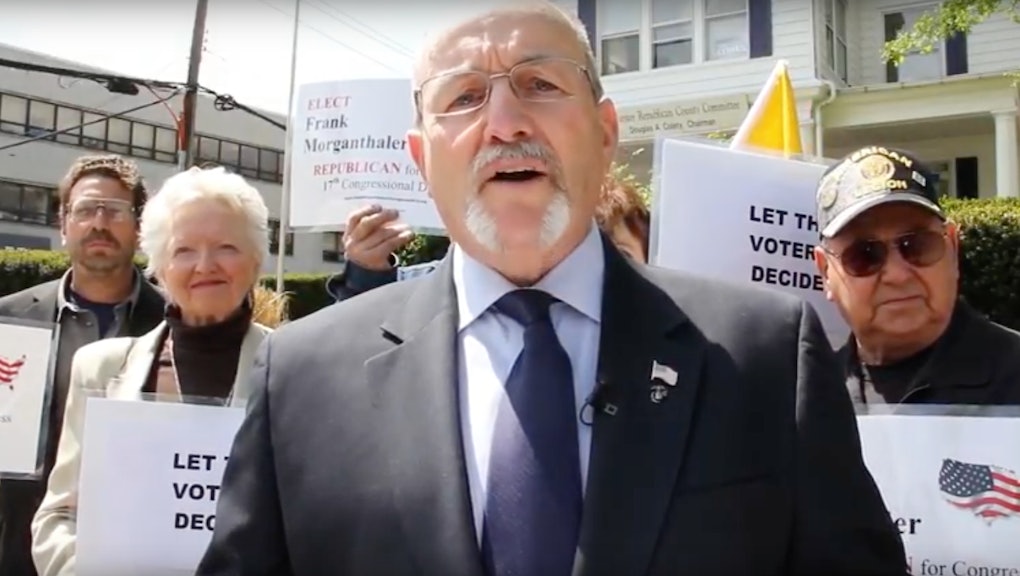 Anti-Muslim activist Frank Morganthaler and other noted white supremacists like Proud Boys founder Gavin McInnes gathered in New York City's Financial District on Saturday for the March Against Sharia demonstration. After making his speech, Morganthaler collapsed on the ground and had a heart attack. He survived.

William Coley, a white Muslim convert and founder of Muslims 4 Liberty, an Islamic libertarian organization, started a crowdfunding page to raise $10,000 for Morganthaler's medical expenses and missed work days. Coley did not respond to Mic's request for comment.

"Repel Frank Morganthaler's evil with good," the crowdfunding campaign read. The page mentions a hadith, or a story of Prophet Muhammad, that recounts the story of how Islam's last messenger sent a doctor for an ill woman that poured trash and chamber pots on him while he prayed every morning.

Morganthaler has made a name for himself as one of the more prominent voices in the anti-Muslim movement. He is the vice president of the New York chapter of the Oath Keepers, which is a right-wing, anti-government militia movement, infamous for protecting white businesses during the Ferguson protests and allying with white nationalists.

On the crowdfunding page, Coley urged Muslims to donate to Morganthaler's fund since "it was the way of our Prophet [Peace Be Upon Him] and I have found the best way to teach haters about the [teachings of Prophet Muhammad] is to be a living example of it."

But other Muslims aren't buying it.

Several Muslims on social media have pointed out the willful ignorance of offering financial support for an anti-Muslim activist when the community itself is enduring systemic violence, income inequality and oppression. "'Showing the true face of Islam' is not paying a white supremacist's medical bills," Laila Alawa, CEO and founder of the Tempest, a global media company for millennial women, wrote in a Facebook post. "It's electing incredible American Muslims to local or federal office. It's paying to ensure Muslim children receive therapy and support amidst a time in which their very identity is under attack."

Hind Makki, a Chicago-based interfaith and anti-racism activist, said while she believes it's commendable to not answer hate with hate, she won't be shelling out dough for Morganthaler's medical expenses.

"I cannot support the idea of raising funds for a man who is part of a heavily armed white separatist organization and literally had a heart attack while fomenting hate against Muslims, weeks after [the Portland stabbing attack]," Makki wrote in an email. "I'm glad that he didn't die. All life is sacred. But I'm not donating to his hospital bill."

Makki believes Muslim Americans need to find other more effective ways of combatting Islamophobia than attempting to court the acceptance of anti-Muslim activists and white supremacists. She said these activists come from an "organized cottage industry of hate directed against Muslims and affecting anyone mistaken for Muslim," and attempting to educate them won't work since they don't care.

"White supremacy and Islamophobia won't disappear by building interpersonal relationships, or changing racists' hearts and minds through a well-intentioned fundraiser," Makki said. "These are systemic challenges facing our country and dismantling these structures of hate must be systemic as well."