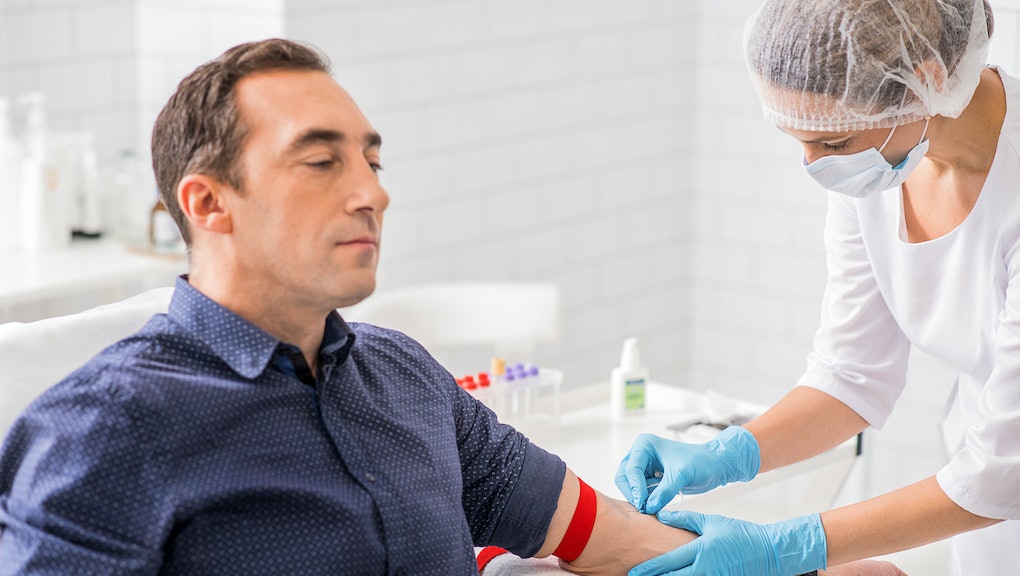 Inside Ambrosia: Could infusions of millennial blood make you young again? Scientists have doubts.

According to Greek mythology, when you consume ambrosia, the blood running through your veins is replaced with ichor, a golden fluid. Ambrosia, consumed only by gods and goddesses, grants immortality.

Ambrosia is also the name of a startup that aims to combat aging. Rather than golden fluid flowing through the veins of gods, the company's product is the blood of the young — actual blood, donated by adults up to age 25 — which it will inject in customers 35 and older who have $8,000 to spare.

The question remains: Do young blood injections actually work? Are we just a needle prick away from sweet, fresh-faced longevity?

Inside the startup trying to cheat death

"I know what you're thinking," said Ambrosia founder Jesse Karmazin in an interview. "Is it all just, like, Silicon Valley tech people?"

It's true: Silicon Valley has a fascination with immortality. Investors have poured billions into longevity research and startups. Venture capitalist Peter Thiel, the billionaire Facebook board member and adviser to Trump, has invested millions into anti-aging medicine. Ambrosia hasn't raised any capital yet, and Karmazin told me that the company has no affiliation with Thiel.

Actually, Karmazin said, Ambrosia's client base is "a real mix of different types of people."

Karmazin said that it's mostly Americans currently undergoing the treatment, with slightly more men than women. He said the company has treated doctors, lawyers, biotech CEOs, someone with a theater background and other individuals from a variety of different industries.

Ambrosia currently has two clinics, one in Florida and one in San Francisco. "The treatment is large: It's two liters, which is a pretty significant amount of blood. It's like four pints if you use the American measuring system."

Still, for $8,000 a pop, blood injections are meant for customers who tend to have a little more disposable income. Ambrosia may not be affordable for everyone, but the pricing is reportedly at cost for now; Ambrosia isn't making any money from it yet.

The company gets its spritely plasma from blood donors. It buys blood from blood banks, an industry Karmazin noted is both heavily regulated and expensive.

Karmazin said that the company has both subjective and objective evidence that its treatment is conclusive. He mentioned clients who looked younger after the treatment, as well as people having more energy, sleeping better and feeling stronger. He also noted that people have had "dramatic improvements in Alzheimer's disease."

From an objective standpoint, Karmazin said the Ambrosia treatment can improve cholesterol, amyloid levels — plaques in the brain — and cancer risk.

"I want to be clear, at this point, it works," Karmazin said. "It reverses aging. We're pretty clear at this point. This is conclusive. We are probably done with the clinical trial. It worked so well, we're going to start treating people. We're pretty amazed with this. Yeah, no, it works, there's really no question whether it works or not."

"I want to be clear, at this point, it works," Karmazin said. "It reverses aging. We're pretty clear at this point. This is conclusive. There's really no question."

But the lack of science casts doubt on Karmazin's confidence.

Evidence on the Ambrosia website includes a handful of links to both human clinical trials and mouse experimental studies. Of the six total human clinical trials included, one is sponsored by Ambrosia. The study was first received in June of 2016. The longest trial dates back to September 2014. The trials aren't yet completed. Some of then haven't even started enrolling yet. And they're small — one has just 18 people. Phuoc V. Le, an assistant professor in the school of Public Health at University of California Berkeley and associate professor of Internal Medicine at UC San Francisco School of Medicine, said a clinical trial of this size is "minuscule" and just a first step to make sure there aren't any adverse reactions.

"Something like this needs to have large clinical trials for years before they can make claims as hefty as what they're making," Le told Mic. He added that "this is years and years away" and that that is something consumers need to be aware of. "This is an unproven remedy."

Nir Barzilai, a professor of endocrinology at Albert Einstein College of Medicine and the director of Einstein's Institute for Aging Research, also agreed that Ambrosia's treatment can't be called conclusive just yet.

“There would have to be clinical trials where some elderly participants receive infusions of something else rather than the blood from younger people because the placebo effect in such trials is high,” he said.

Derek Huffman, assistant professor of molecular pharmacology and medicine at the Albert Einstein College of Medicine, said in an email that the willingness to treat individuals with transfusions for aging at this point is, in his view, "a distortion of the studies it is based on, and an example of an idea getting too far ahead of the science." He added that "this is not to say that this burgeoning area of science is not promising, and that related strategies will not one day come to fruition to successfully target aging, but they will require a much more targeted and fine-tuned approach than is being suggested here.”

Le noted that for vulnerable populations, such as people suffering from stroke or early-onset Alzheimer's or dementia, they can't and don't want to wait, so it's dangerous for Ambrosia to make promises of reversal or amelioration of their conditions that are inconclusive, and at a considerable cost.

"For example, if I had early-onset dementia and I lived in Palo Alto and I'm a retiree and I'm living off of social security but I saved up $8,000, and I've seen my parents die of dementia, and saw how bad it was, I might consider spending essentially my savings on something that is unproven," Le said. "Although they are selling it as, not a cure-all, but potentially life-altering and so I worry that — it's clearly not coercion — but I worry that that people will fall into this trap of spending big bucks and not getting approving benefits."

It's also important to consider the ethical implications of companies like Ambrosia. As Karmazin mentioned, the company gets it plasma by purchasing blood from blood banks. If this type of treatment were to scale up, and companies had millions of people using it, the demand for young blood would be astronomical.

"Could we see a day when young people are selling their blood on the open market for companies like Ambrosia?" Le hypothesized. "And then what do we do in terms of balancing the public good? Meaning, if I were a patient in a hospital and I required plasma because I have a really bad medical condition, but maybe the Red Cross can't get any, because people would rather sell their blood to a company than to donate their blood because it's a limited public good."

Le compared this commodification of blood to the organ black markets in developing countries, noting how this can disproportionately coerce and hurt the poor while benefiting the wealthy. Someone can donate their kidney to a rich person and, as he noted, the type of individual to do this is someone extremely impoverished.

If large clinical trials do bear out, great. But Le believes there could be more benefits yielded from that type of research than just an outpatient elective treatment like Ambrosia. He said that we should figure out what is in plasma that actually confers the benefits, and potentially try and isolate that.

Le said that perhaps medical experts can make plasma synthetically, from animals or in a way that doesn't commodify a public good like blood. That way, it "can provide benefit not just to the rich or to the extremely desperate but also make it available equally to all people."