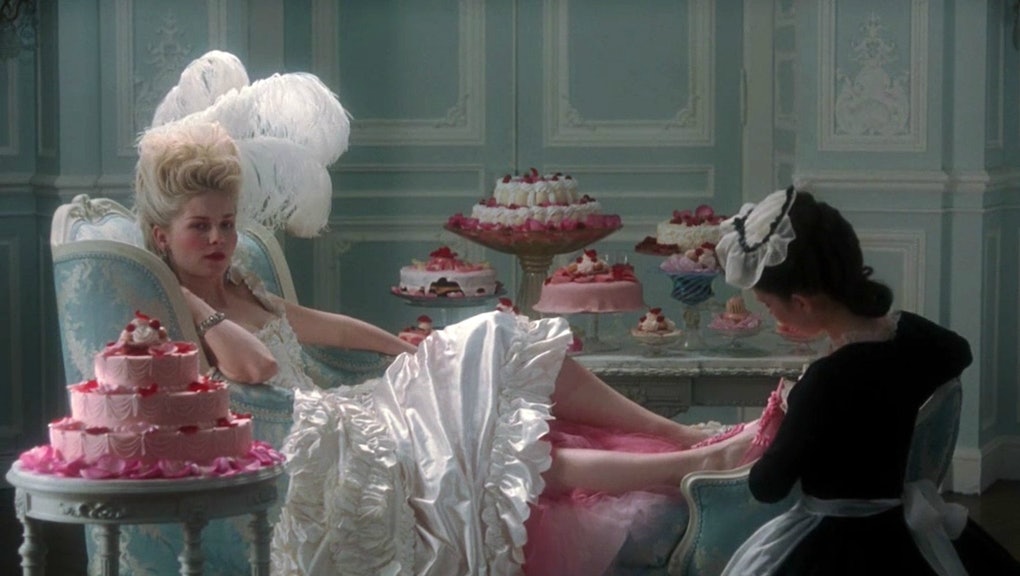 Revisiting 'Marie Antoinette,' and why critics got the movie wrong

When Sofia Coppola’s Marie Antoinette premiered at the Cannes Film Festival in 2006, the film’s reception was famously caustic. Booing at Cannes is a time-honored tradition, but there was a political aspect to the rejection — liberal French audience members were reportedly angry that Coppola appeared to be glamorizing the wildly unpopular royals. When proper reviews started to roll in, the verdict was less dismissive but still lukewarm — the film currently holds a 55% on Rotten Tomatoes.

But at the June 6 screening of Marie Antoinette I attended at Brooklyn's Nitehawk Cinema, the entire audience appeared to be completely enthralled. We basked in the film's lush textures, its acerbic, minimalist dialogue and its detached, semi-ironic tone. More than a decade removed from its original release, the film deserves to be celebrated for what it is: a tonally unique and visually stunning presentation of a young and very human woman.

Back in 2006, Keith Phipps at the AV Club gave the film a C rating, writing, "It's history written with truffles." In the New York Times, Manohla Dargis wrote: "Despite some lines about the American Revolution, which is helping drain the king's coffers and starve his people, Ms. Coppola ignores what's best about Marie Antoinette's story. She doesn't seem to realize that what made this spoiled, rotten woman worthy of attention weren't her garden parties and fur-lined shoes, but the role she played in a bloody historical convulsion."

That may be how textbooks portray Marie Antoinette, but Coppola's film is not about the doomed queen as a pawn or victim of the French Revolution — and that's exactly the point. The director made a picture in which a lonely teenage girl, winsomely portrayed by Kirsten Dunst, could become a flesh-and-blood, eclair-savoring character worthy of her own story. Dunst's Antoinette isn't some flat political figure typecast into whatever role seems most convenient or dramatic — the harlot, the heartless or the headless.

In the hands of many other directors, this movie would have undoubtedly either begun or ended with the Queen's bloody, dramatic death by guillotine. Imagine screaming crowds, weeping children, hair being shorn off, a short speech drowned out by shouts before a sickening thwack: It'd be a scene that would feed our true crime-addicted appetites for gore and tragedy. With characters like the ugly and arrogant Maximilien Robespierre and the frenzied Jean-Paul Marat, confined to his bathtub with a skin disease, the French Revolution is ripe for a film that covers, as Dargis called it, the "bloody historical convulsion."

But that is not the film Coppola sought out to make. Coming off of two critically respected films (1999's moody The Virgin Suicides and 2003's melancholic Lost in Translation), Coppola had built the cache to helm an ambitious project in her own right, not just thanks to her famous family name.

Marie Antoinette was Coppola's second collaboration with Dunst after Virgin Suicides (their third, The Beguiled, premiered at Cannes this year and is due for a limited release in the U.S. on June 23), and together they use the character of Marie Antoinette to tell an incredibly subtle story about women's limited spheres of power. It's a film about a teenage girl thrust into a marriage and world she does not understand who, over the span of roughly two decades, grows into a charismatic, selfish, kind and unlikable woman. Dunst, who was in her mid-20s at the time of filming, is able to lend both the wide-eyed naïveté and world weariness that the script requires at different points.

We enter Versailles from Antoinette's perspective. Coppola uses POV shots early on, when Antoinette's still an adolescent, looking up at terrifying painted and judgmental faces, listening to rustling fabric and gossip about people we don't yet know. Critics and audiences who chastised Coppola for failing to show the larger picture beyond the famous palace seemed to miss the point entirely: Frustration with the nobles' inability to see beyond the gilded walls of Versailles is exactly what we should be feeling. Antoinette's early suggestions that she and her husband — a standoffish stranger with no real interest in her, played by Jason Schwartzman — might go to Paris to see the opera are shot down and forgotten.

Antoinette is constantly reminded that her very station depends upon becoming pregnant by that man, who responds to her attempts at flirtation with a chummy pat on the hand. We are trapped here because she is trapped here and because the attentions of those in charge were trapped there, shackled to Schwartzman's milquetoast boy-king, with his bad haircut and lock-making obsession. Viewers feel not only Marie Antoinette's frustration but also the despondency that must've hung over the people of France at that time: They're impotent in the face of indulgence and incompetence.

Which is not to say that Marie Antoinette is a claustrophobic film — quite the opposite. Although it's cliche to remark that any single frame of the film might be a painting, it's worth acknowledging again just how beautiful Marie Antoinette actually is. Between sun-dappled gardens and floral wallpaper and pastries as pretty as the costumes on the women enjoying them, Coppola expertly depicts Versailles and all of its splendor without making the film ever seem stuffy or overly formal. This is in part thanks to a new-wave influenced and refreshingly anachronistic soundtrack featuring Adam and the Ants, The Cure, Bow Wow Wow and The Strokes. The post-punk aesthetic informs not only the music but also the film's instantly recognizable poster and title card: "Marie Antoinette," rendered in hot pink, in a font that recalls the Sex Pistols' iconic logo.

I should also point out that the film is laugh-out-loud funny. At least it was at the Nitehawk, when every mumbled line or awkward hand gesture from Schwartzman elicited actual guffaws from the audience, as we enjoyed our cocktails. Oh, we were also drinking cocktails. Did I not mention that the Nitehawk screening was complemented by a six-course dinner?

At the dine-in theater's bi-monthly Film Feast screenings, a movie, usually a cult classic, is paired with a series of custom-designed dishes and drinks themed around the picture. Each dish is inspired by a particular scene, and the Nitehawk staff operate like magicians, dashing between rows — never blocking a view — and making the next course appear right as its corresponding moment appeared on screen.

So that is how, when Marie Antoinette awoke her first morning in Versailles to its elaborate ceremonies and formality, we in the audience ate BeauSolieil oysters with an asparagus and heirloom tomato mignonette, paired with an acidic cocktail of Laurent-Perrier Brut champagne, Owney's rum and grapefruit tincture.

For the queen's tone-deaf retreat to play farm girl at the Petit Trianon, we ate alp blossom cheese from Manhattan's Murray's Cheese with fresh herbs and an en plein air panna cotta; we sipped a clarified milk punch with more Owney's rum, Mathilde peche liqueur, honey, lemon, orange blossom and whey. Her immortal (but probably fictionalized) line of "Let them eat cake," came with, what else, a dark chocolate cake with salted caramel from the Brooklyn-based Butter & Scotch and an activated charcoal ganache as pitch-black as the queen's inevitable end. (The true showstopper came earlier, another item from the brilliant minds at Butter & Scotch: a piña colada jello shot shaped like a boob.)

That is precisely how Marie Antoinette should be enjoyed — while devouring a procession of gougères and pheasant and homemade eclairs as you're getting progressively drunker on expertly crafted cocktails. (That is also, in my opinion, how almost every movie should be enjoyed.)

Perhaps it's not a surprise that anyone expecting a relatively straightforward historical drama about the political and economic factors that led to the French Revolution was put off by Marie Antoinette. It is a small, internal film presented on a massive set. It is a shamelessly female film — in which power is communicated through pregnancies, fashion and gossip, the only areas in which wealthy women at the time had any power. The men's discussions of politics and money are all relegated to small tongue-in-cheek moments, all mocking the king's indecisive and timid leadership. The film goes no further and no deeper than Marie Antoinette likely did herself. You are drawn in, like she was, to the indulgent world of visual excess. We at Nitehawk were fortunate enough to share in the gastronomical excess, too.

The Beguiled, Coppola's forthcoming period piece set during the Civil War starring Dunst, Nicole Kidman and Colin Firth, is similarly focused on women. Based on a 1966 novel by Thomas P. Cullinan, it centers around a girls' boarding school in Virginia which takes in a wounded Union soldier, who ignites sexual rivalries among the women. In Coppola's work, jealousy and romance aren't dismissed as petty or frivolous themes. Women's experiences, even in the 17th or 18th century when they were confined to domestic realms, are just as vital and valid for prestigious storytelling as men's. And it's being treated favorably by critics: Sofia Coppola won Best Director at Cannes for The Beguiled, the second female director ever to do so, after Yuliya Solntseva won in 1961 for Chronicle of Flaming Years.

At Nitehawk, when the credits to Marie Antoinette rolled and the lights came up, after six courses and more alcohol than I had imbibed in the entire previous month, I left the theater completely satiated and only a tiny bit nauseous — exactly as one should after watching two hours of frivolous spending and utter self-absorption. I woke the next morning with a hangover, a headache pulsing through a head that fortunately was still attached at the neck.