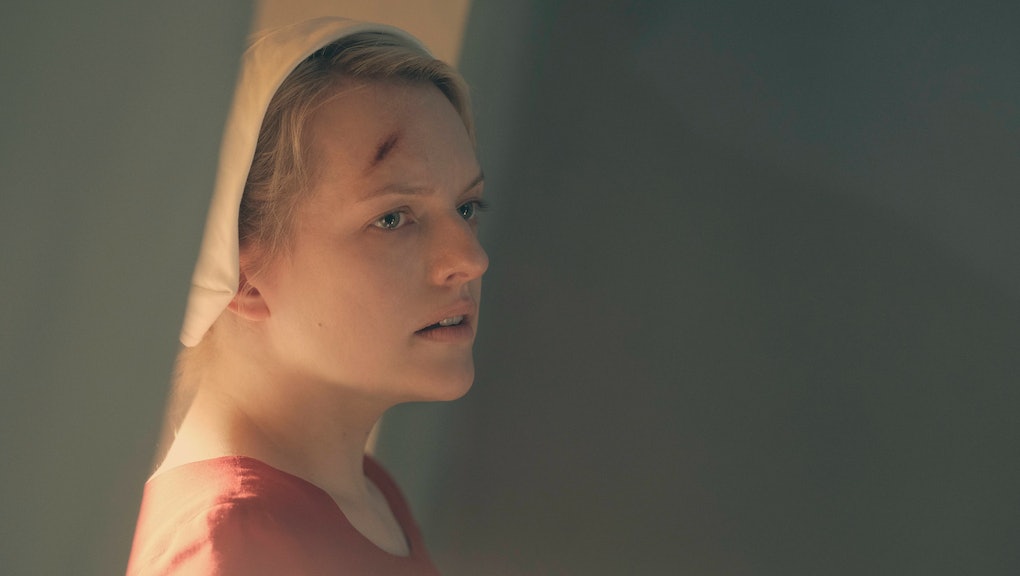 (Editor's note: Spoilers for season one of The Handmaid's Tale's ahead.)

At the very end of the first season of The Handmaid's Tale, a pregnant June (Elisabeth Moss) is taken by members of a militant police group known as the Eyes. Her lover and confidante, Nick (Max Minghella), urges her to trust him, claiming the Eye arresting her is the right call. She moves confidently, if somewhat cautiously, to the black van that awaits her outside Commander Waterford's home, with Joseph Fiennes' commander shouting and Yvonne Strahovski's Serena Joy hissing at her as she walks. But nothing stops June's march, filmed in one take: She is off to whatever is next for her in the oppressive, dystopian Republic of Gilead.

This, give or take a few details, is almost exactly what happens in Margaret Atwood's original 1985 novel on which the show is based. In the book, Nick explicitly tells her the men taking her are part of the resistance effort Mayday, but otherwise, the book's contemporary story ends with June in the van.

When The Handmaid's Tale returns for season two, whatever comes next will be a completely new invention. The show has covered the book's story from June's introduction to Gilead through her unclear departure, leaving no more source material to adapt. If the first season's deviations from the book are any indication of what to expect, that's a very good thing.

While The Handmaid's Tale has been excellent throughout its first 10 episodes, give or take a few clumsy music cues (the use of "Feeling Good" in the finale is particularly corny), the show stayed remarkably close to the novel in the back half of the season. Visits to the illicit Jezebels brothel, where June met Moira (Samira Wiley) once again, were in the book, as was June's aforementioned "arrest" by the Eyes. After some of the show's story threads took a lot of liberties with Atwood's novel — including making Alexis Bledel's character, Emily, a lesbian — returning to the status quo felt a bit stale.

That's why Janine's suicide attempt in episode nine felt so fresh and terrifying. In the novel, Janine's baby with Commander Putnam doesn't survive and she loses her mind in the process. June barely pities her.

In the Hulu series, Janine similarly goes mad, but it's not because she loses her baby with her commander (Stephen Kunken). Their baby survives, but she's actually been having an affair with Commander Putnam, who's made a lot of promises about a life together he cannot keep. Janine's mental break comes when she's taken away from both her lover and child — and only June can prevent her from harming the baby in her desperation.

The scene is gripping, in part because Moss and Madeline Brewer, who plays Janine, are terrific in it. Brewer plays live-wire Janine with the right mix of danger and inner fear, while Moss infuses love and care for Janine in every line. It certainly helps that — for book readers and nonreaders alike — the scene was new. It opens up the world of Gilead a bit more, showing us how the government and its people would respond to the threat of a child's death and giving June even more motivation in her rebellion against the theocratic state.

The same could be said for every scene in the finale when Moira makes it to Ontario safely after escaping the Jezebels — another change from Atwood's book. The male clerk checking her in at the refugee center treats her like a human, giving her supplies and funds and constantly checking in on her health. Moira's slow, quiet acceptance of this kindness, after years of living in a society where women are seen as lesser, is heartbreaking to watch.

But nothing compares to her reunion with fellow Canadian refugee Luke, June's husband. It's the first we've seen of O-T Fagbenle's Luke in the present day since his focus episode. He had put Moira on a list of family so he would be notified if she ever made it to Canada. Moira is deeply touched by this, and their reaction to seeing each other — a powerful, intense hug — is a total explosion of love and comfort in a show that rarely has either.

These scenes elevate The Handmaid's Tale and, hopefully, give us a hint as to what's in store for season two. Atwood's novel is undoubtedly a classic, but it's relatively short; at 311 pages, it's a mere glimpse of how grueling life is in Gilead. The finale offers some relief that change could be coming for June, a shift that might make life better for her. Of course, we don't know where the black van is going; the positive note of the finale could be a red herring.

Whatever does happen, it will be a pure invention of the show, a chance to expand and explore the world Atwood created decades ago.

Season two of The Handmaid's Tale has no announced release date, but all episodes of season one are now available to watch on Hulu.