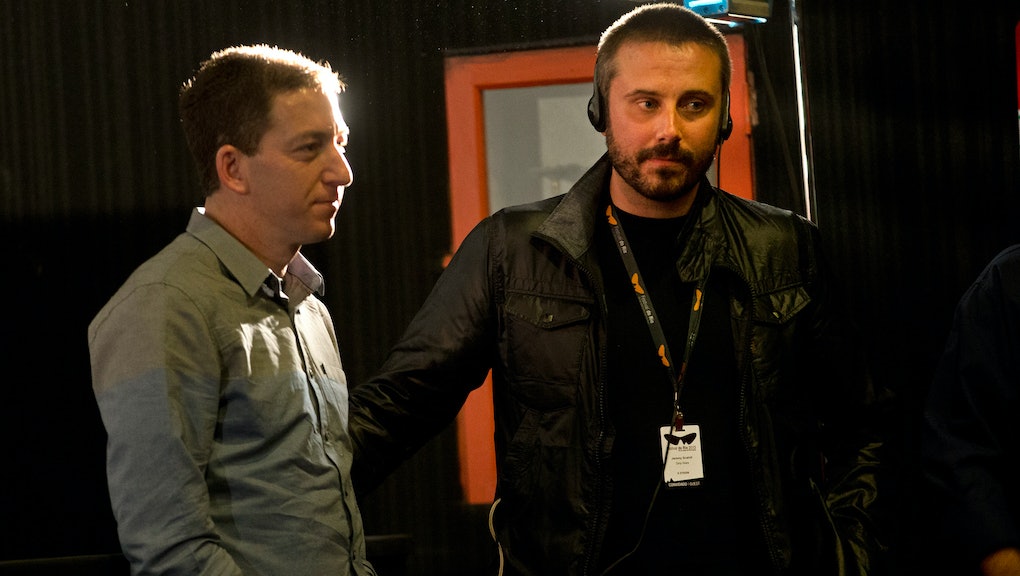 The investigative news site the Intercept has launched an internal investigation into the publication of a classified NSA document, the site’s co-founders said Tuesday.

The suspected source of that NSA document, which was provided to the Intercept anonymously and detailed efforts by Russian military intelligence to hack local election officials and gain access to U.S. voting systems company, was reported in early June to be 25-year-old government contractor Reality Winner.

Winner was arrested and charged under the Espionage Act for allegedly leaking classified information to an online news outlet. Her arrest was announced hours after the Intercept's story went live.

Since Winner’s arrest, the Intercept had remained noticeably silent about the matter. The Intercept has been a vocal defender of government leakers, particularly Edward Snowden and Chelsea Manning. The site’s about page cites Snowden’s revelatory 2013 leaks as the sole reason why the site was founded. Greenwald is particularly well-known for his outspoken defense of leakers and the publication of leaks.

Intercept co-founders and editors Glenn Greenwald and Jeremy Scahill said in a joint statement on Tuesday that the Intercept has been "institutionally constrained from speaking publicly about the accusations made by the Trump Justice Department and the FBI."

After Winner’s arrest, speculation swirled around whether the Intercept had inadvertently helped investigators identify Winner. An affidavit from an FBI agent investigating the leak, which was made publicly available by the Justice Department, seemed to imply that investigators were tipped off by Intercept reporters hoping to confirm the document’s validity. The existence of "microdots" on a copy of the NSA report uploaded by the Intercept was also noted following Winner’s arrest. Those microdots could have been used to identify the time and date a page was printed out, and from which printer the document originated — although it’s unclear whether investigators used this method, or even whether they were able to examine microdots on the copy of the NSA report that the Intercept allegedly provided them.

On June 6, a spokesperson from the Intercept declined to comment on the specific claims laid out in the FBI agent's affidavit, but the site issued a general statement reasserting that the document was leaked to the site anonymously and urging readers to be skeptical of the Justice Department’s account of the matter.

In the Tuesday joint statement, Greenwald and Scahill said that the news organization was examining those claims, but expressed deep frustration with what they said have been "false accusations" from "irresponsible journalists."

On Tuesday, Intercept managing editor Charlotte Greensit said the site had no further comment regarding the internal investigation because the site doesn’t want "to influence the government’s case against Reality Winner in any way." Greensit told Mic that the Intercept "will be as transparent as possible with the results of the internal review."

Greenwald and Scahill said they were able to speak out about the matter because they do not face the same institutional restraints as others at the site. The co-founders distanced themselves from the report, saying they "played no role whatsoever in this story," and they mentioned the names of two Intercept staffers who were not involved in the story but whom they said "blame has been heaped on" nonetheless:

Because the two of us did not work in any capacity on this story, and thus had no knowledge of what took place, and because we do not edit the Intercept, we do not face these same [institutional] constraints, and feel compelled to demonstrate how irresponsible and deceitful much of the commentary has been ...Our names have been continually invoked even though we played no role whatsoever in this story. Blame has been heaped on two of our colleagues who are security experts — Micah Lee and Erinn Clark — even though they did not work on this story in any way at any point."

The statement did not mention the four reporters — Matthew Cole, Ryan Grim, Richard Esposito and Sam Biddle — who are credited with the initial reporting on the NSA document.

Greenwald and Scahill's statement mainly concerned itself with an unfounded claim made by New York magazine writer Jonathan Chait, which Greenwald and Scahill vigorously refuted. Chait’s claim involved an excerpt from an ABC News report that pointed to a March 22 episode of the Intercept podcast “Intercepted,” in which Scahill and Greenwald discussed the “hysterics” surrounding the Russia investigations. Chait claimed that Winner leaked the NSA report to the Intercept “to try to persuade” Greenwald “to stop dismissing the Russia scandal,” Chait wrote.

Charles Davis, an editor for the site Attn, made a similar claim, saying that the March 22 podcast “appears to have motivated Reality Winner” to allegedly leak the report.

There have been no reports as to whether Winner did or did not listen to the March 22 episode of "Intercepted." The motivations for the alleged leak also remain unknown.

Greenwald and Scahill did not directly mention Davis or the original ABC News report, although they slammed unnamed reporters for spreading what they said were “demonstrably false claims” about the episode, and for treating the assertions made from the Justice Department as “unquestioned truth.”

In their refutation of Chait’s characterization of the events, the co-founders said that the transcript that was requested was of the Intercept’s March 29 podcast, not the March 22 episode, as the ABC News report and Chait’s subsequent tweet implied.

“Everything about the inflammatory accusation in Chait’s tweet was false and reckless,” the co-founders wrote.

A spokesperson for ABC News did not respond to a request for comment about the matter. Chait, in a tweet Tuesday afternoon, clarified his earlier statement, saying, in part: “I don’t know why Winner acted.”

Davis, when reached by Mic, said he hope Greenwald and Scahill would soon speak out in support of Winner:

As prominent supporters of Chelsea Manning and Edward Snowden, I hope they decide to speak out and condemn the Trump administration's war on whistleblowers and its detention of an alleged source for their publication. Right now it seems like Reality Winner has been abandoned by many who should be her most outspoken allies ... I hope, since they are now commenting on the case, that they will now speak out about her treatment."

Winner was denied bail Thursday after prosecutors argued she might leak more information and that she was a danger to society.