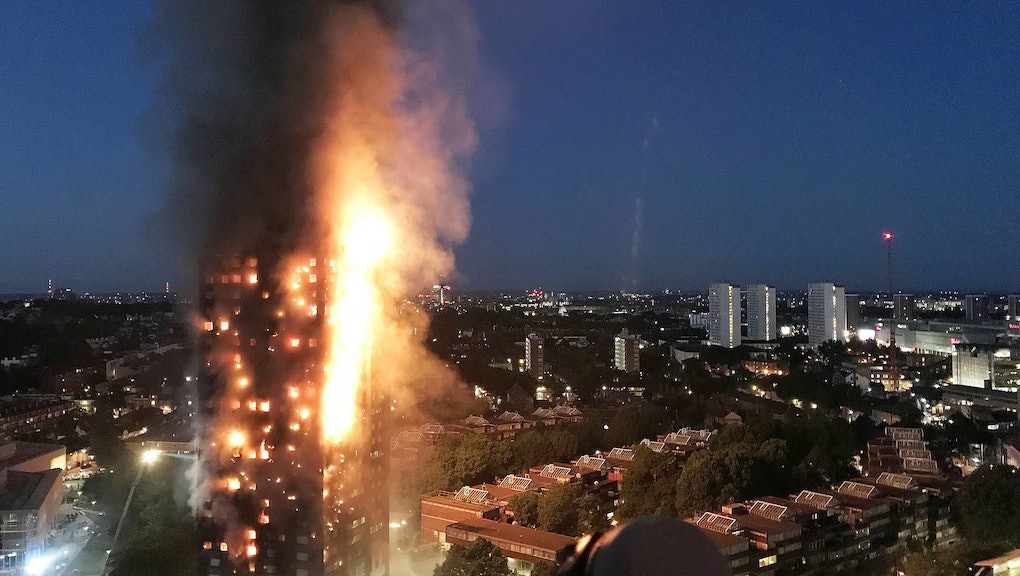 At least twelve people are dead after a massive fire broke out in a London apartment building, the Associated Press reported Wednesday, and dozens more have been hospitalized, according to the BBC. The cause of the fire has not yet been determined.

The massive fire engulfed the Grenfell Tower, a 24-story apartment building in London's Kensington neighborhood. London Fire Commissioner Dany Cotton told reporters that the "size and complexity" of the building made assessing the number of fatalities complicated.

Cotton told reporters that the fire was an "unprecedented incident," according to the BBC.

Grenfell Tower has 120 residential apartments, and one local leader told the BBC that there could have been "several hundred" people inside the building when the fire broke out.

One resident of the building, identified only as Zoe, told the BBC that she was woken up when a neighbor banged on her apartment door. "The whole landing was thick with smoke," she said. "The smoke alarms weren't going off but the way it spread so quickly from the fourth floor, all the way up to the twenty-third floor, was scary."

Paul Munakr, another resident of the building, told the BBC that he first realized the building was on fire when he heard people outside on the street below yelling "don't jump, don't jump."

"As I was going down the stairs, there were firefighters, truly amazing firefighters that were actually going upstairs, to the fire, trying to get as many people out the building as possible," Munakr told the BBC.

The Grenfell Tower was built in 1974. New work on the building, including the exterior and the addition of a new communal heating system, was completed in 2016, according to the BBC.

The Grenfell Action Group, a tenants-rights group, has previously accused the building's management, the Kensington and Chelsea Tenant Management Organisation, of "ineptitude and incompetence."

In a blog post from 2016, the group warned that KCTMO had neglected safety concerns in the building and warned that "a serious fire in a tower block or similar high-density residential property is the most likely reason that those who wield power at the KCTMO will be found out and brought to justice."

Speaking to BBC radio, London Mayor Sadiq Khan said the fire calls into question the safety practices of buildings like Grenfell. "We can't have a situation where people's safety is put at risk because of bad advice being given or if it is the case, as has been alleged, of tower blocks not being properly serviced or maintained," he said, according to the BBC.

Friends and family of people who are still unaccounted for after the fire have put out appeals on social media, and a emergency center has been set up for those who are displaced by the fire.

Collections are also underway for clothing, toiletries and toys for victims of the fire, the BBC reported.