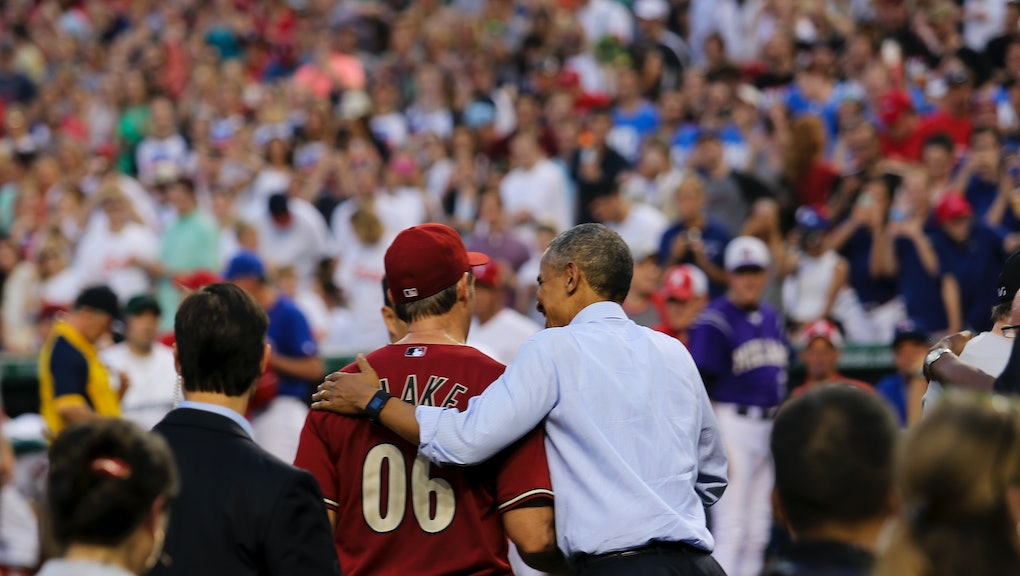 Bipartisanship is scarce these days in Washington, D.C., with members from both parties retreating to their respective political corners as cooperation quickly becomes a thing of the past.

But there's still one remaining bipartisan tradition in the nation's capital that has brought Democrats and Republicans together for decades. It's the annual Congressional Baseball Game, in which Republicans and Democrats suit up and take to a Major League Baseball field to raise money for local charities.

On Wednesday morning, a gunman went after that storied event, opening fire on Republican members of Congress who were practicing one day before the scheduled game.

House Majority Whip Steve Scalise was hit, but is expected to survive. U.S. Capitol Police officers, Congressional staffers and the suspect were also shot, with the suspect and another victim in critical condition, according to CNN.

And Members of Congress — who have enjoyed the tradition for years — are calling for the game to go on.

That includes Rep. Mo Brooks (R-Ala.), a member of the Republican team who was at the shooting and attended to some of the wounded at the scene.

"Tomorrow night's supposed to be the game, hopefully we'll still have it," Brooks told CNN in an interview as he offered harrowing details of the shooting.

And Rep. Rodney Davis (R-Ill.) — who was at practice at the time of the shooting — told NBC that he "absolutely" thinks the game should go on.

"I think we should be able to raise even more money for local DC charities," Davis said.

A brief history of the Congressional Baseball Game

The tradition of the Congressional Baseball Game began in 1909. It was organized by the late Rep. Jon Tener (R-Pa.), a professional baseball player who went on to be president of Major League Baseball's National League.

Since then, the game has taken a few hiatuses during the Great Depression, the Second World War and later was canceled in 1958 by storied House Speaker Sam Rayburn — who was worried the game had gotten "too physical" according to the Congressional Baseball Game website.

The game was revived in 1962, along with the help of congressional newspaper Roll Call — it is a tradition that continues to this day.

Members of Congress take the game seriously, not only because it raises money for local charities, but because many of them get to live out their dreams of playing baseball on a Major League field. They wear baseball jerseys of either their local baseball team or their favorite Major League Baseball club.

Current members of Congress even scout candidates running for office, seeing if their baseball skills would make a good addition to their team should they be elected.

In recent years, the game has taken place amid major political battles.

In 2015, Obama made a surprise visit to the game the day before the House was slated to vote on granting him the ability to fast-track a trade bill. The bill passed the House and later the Senate — though President Donald Trump has since killed the trade deal.

David Meyers, vice president of business operations at Roll Call told Mic that the game "remains one of the few bipartisan traditions that is guaranteed to have Republicans and Democrats on the same page," adding that they raise "hundreds of thousands of dollars" for D.C.-area charities in the process.

"While the team that loses isn't happy, they'll be back at it the next year to try again," Meyers said.

The game will go on

Members of Congress were informed that the Congressional Baseball Game will go on Thursday.

"We will play for charity, but also for the victims & the heroic officers who took down the shooter," Rep. Eric Swalwell (D-Calif.) tweeted.

It's unclear if the rules of the game will stay the same.

Some have suggested ways to make the already bipartisan tradition even more bipartisan.

Mike Memoli, a reporter for the Los Angeles Times, suggested having the House play the Senate.

"Senate versus House. Senate team gets extra at bats and unlimited time between pitches," Memoli tweeted.