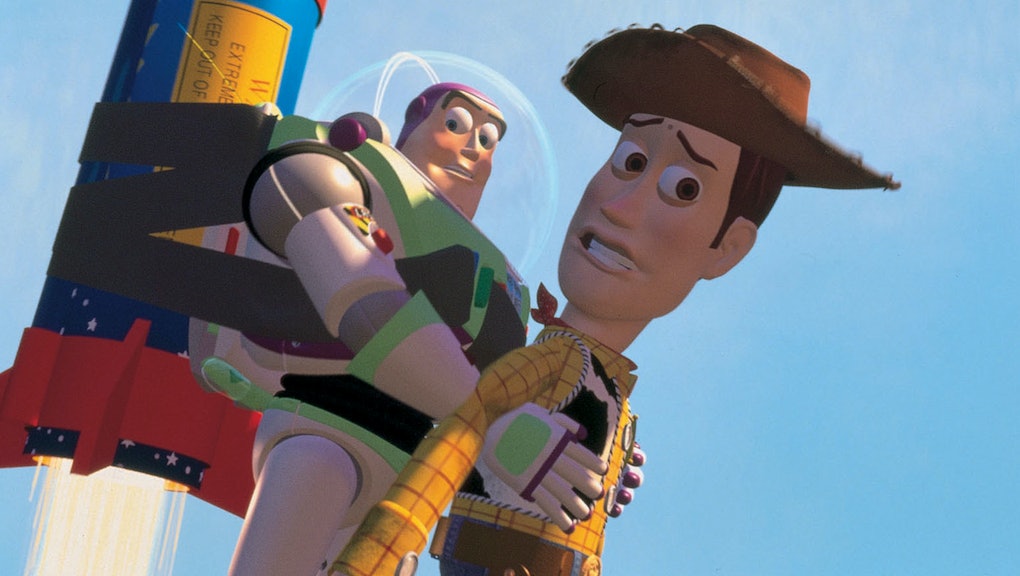 Cars 3 is the latest Pixar movie to hit theaters, which means it's another chance for fans to keep an eye out for easter eggs.

In every Pixar movie, there are countless easter eggs that connect the films to previous or future ones. This has caused Pixar fans to create the Pixar Theory, suggesting that all of the Pixar movies exist in the same universe.

There are also easter eggs that have appeared in nearly every single Pixar movie, including the A-113 symbol and the Pizza Planet truck from Toy Story. The easter eggs range from the vehicles from Cars appearing in The Incredibles to Riley from Inside Out appearing in Finding Dory.

Here are some of the other notable easter eggs found in Pixar's movies.

In the very first Pixar movie, Toy Story, the film contains one of the first easter eggs: the code A-113. This combination, which appears on a license plate in the movie, is a reference to the California Institute of the Arts animation classroom used by current and past students, like Pixar directors John Lasseter and Brad Bird.

Since Toy Story 2 came right after A Bug's Life, it has a nod to that movie. In one scene in the sequel, there is a calendar that features the characters from A Bug's Life.

Monsters, Inc. has some outstanding Easter eggs that link it to the other Pixar movies. Of course, one of the most striking ones that no one can miss is Rex from Toy Story. When Mike and Sully are walking on their way to work, they stop at a crosswalk and are seen beside a dinosaur and it turns out to be Rex. There is also a tease for Finding Nemo as a Nemo plush toy can be seen in a a few scenes in the movie.

Sometimes, Pixar's easter eggs are so quick, you'll blink and miss them. In Finding Nemo, Pixar teased Cars, which would come out three years later. In a a very quick scene, Luigi, the owner of Luigi Case Della Tires in Cars, is seen driving past. He makes his cameo in a scene when all of the fish are escaping back to the ocean in their water bags. This scenes also features a cameo from the Pizza Planet truck from Toy Story, because of course.

Monsters, Inc. is connected to The Incredibles with one, small character. When Mr. Incredible is leaving the hospital, a young male patient is wheeled by him and it is the same kid who was used in the scare simulator in Monsters, Inc.

Cars connects to Toy Story a few times. The tires on Lightning McQueen and the other drivers are sponsored by Lightyear tires, a reference to Buzz Lightyear, of course. Elsewhere in the movie, a drive-in in Radiator Springs is playing a movie called Toy Car Story, another reference to Pixar's first feature film.

Even in France, Pixar has to plant some Easter eggs. In Ratatouille, Bomb Voyage from The Incredibles stops by for a few appearances. He first shows up as a mime on the bridge by Notre Dame and then is on the front-page of a newspaper Colette is reading.

In WALL-E, the movie has some connections to Toy Story. First, the character Hammy appears in the background of a scene between WALL-E and Eva. In another scene, the orange caution cones used in Toy Story also appear at a garbage site WALL-E is combing through.

After viewers are done wiping away their tears from the heartbreaking opening scene of Up, there are some clues to be found in the movie. Since Up came out before Toy Story 3, Pixar teased one of the characters from the sequel. Lotso, the bear from Toy Story 3, appears in a child's bedroom in the film.

Toy Story 3 has Easter eggs for a few Pixar movies. On Andy's bedroom door, there is a sticker referencing Crush from Finding Nemo. The movie also has some Easter eggs for Newt, a movie that was supposed to come out in 2012 but has been shelved since.

Although Brave takes place in 10th-century Scotland, it of course still has a few Easter eggs in it. In the movie, there is a scene in which Sully of Monsters, Inc. appears carved in a piece of wood. Of course, the Pizza Planet truck also makes an appearance as a carved piece of wood.

In Monsters University, there is an Easter egg teasing The Good Dinosaur. During the Scare Games, there is a dinosaur toy that looks just like one of the dinosaurs from the movie.

Inside Out has some really interesting easter eggs that connect it to previous Pixar films. The orbs of memories inside Riley's mind are made of many things, some of them are memories of the opening scenes of Up. Pixar just really wants to make everyone cry.

In The Good Dinosaur, one of the movie's sneakiest Easter eggs is an A-113 reference. The A-113 logo appears in a wooden fence in the movie and it is a bit hard to make out, but it is there.

One of Finding Dory's most adorable Easter eggs is the link to Finding Nemo. When Dory ends up at the Marine Life Institute while on her journey to find her parents, there is a familiar face haunting her while there. In the background of one scene, Darla, the braces-wearing dentist patient who terrorized Nemo in Finding Nemo, is a picture on the wall. Memories!

Cars 3 has the usual Pixar Easter eggs, but it also teases the upcoming release Coco. When Cruz Ramirez is first introduced, she trains with other racers. One of them needs a bit of motivation, so he is shown a picture of his hometown. The hometown resembles the same town Miguel of Coco comes from.