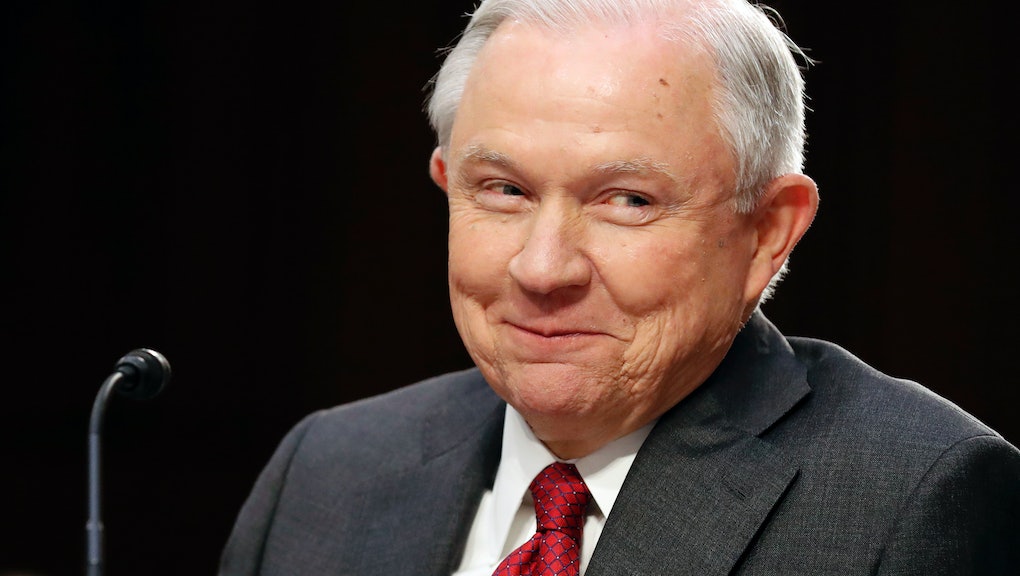 Attorney General Jeff Sessions seemed to have a fuzzy memory during his testimony before the Senate Intelligence Committee Tuesday.

Over and over again, Sessions said he did not "have any recollection" or didn't "recall" various things during questioning from his former Senate colleagues.

But the phrase may be more than mere forgetfulness. It could help protect him against potential perjury accusations in the future.

According to federal law, a person under oath has committed perjury when they "willfully and contrary to such oath states or subscribes any material matter which he does not believe to be true."

Saikrishna Prakash, the James Monroe distinguished professor of law at the University of Virginia, said in an email that answers like the ones Sessions gave Tuesday could make it easier for him to make the argument that he did not "willfully" mislead questioners if any part of his testimony turns out to be not true.

"If one faces hostile questioners, hedging is a smart strategy," Prakash said.

Earlier in June, some Democratic lawmakers suggested Sessions had committed perjury when he failed to disclose during his confirmation hearing communications he'd had with Russian Ambassador Sergey Kislyak.

Prakash said in an interview at the time that proving perjury is "extremely difficult" because it requires establishing that the person "willfully" made a false statement.

"The difficulty is the mental state," Prakash said. "Sessions could say 'I was responding to the claim of continuous communications — I didn't do that.  These were one-off conversations and terse.' Or he could say 'I forgot.'"

In an email after Sessions' testimony Tuesday, Prakash said that "safe answers" like the ones the attorney general gave the Senate could make it easier for Sessions to claim he "forgot" if accused of lying under oath in the future.

"'I forgot' becomes easier to stomach after prefacing your comments with 'I don't recall,'" Prakash said.

In his tense testimony Tuesday, Sessions strongly denied any involvement in Russia's interference with the 2016 election and defended his recusal from involvement in the Russia probe — despite his role in firing former FBI Director James Comey, which some argue violated his recusal.

He also gave shifting answers about a possible third communication with Kislyak at the Mayflower Hotel in Washington, D.C., in April 2016. He first stated that he "did not have any private meetings, nor do I recall any conversations with any Russian officials" at the Trump campaign event, but under questioning expressed less certainty.

"Well, I guess I could say that I possibly had a meeting, but I still do not recall it," Sessions said.

Sen. Kamala Harris (D-Calif.) opened her questioning of the attorney general by calling attention to Sessions' stated uncertain recollections in the responses he'd given.

"You have several times this afternoon prefaced your responses by saying 'to the best of your recollection,'" Harris said. "For any of your testimony today, did you refresh your memory with any written documents, be they your calendar, written correspondence, emails, notes of any sort?"

"I intend to refresh my recollection," Sessions said. "But so much of this is in a wholesale campaign of extraordinary nature that you're moving so fast you don't keep notes."

When Harris asked Sessions if he'd had any undisclosed communications with Russians during the campaign, the attorney general again said that he "didn't recall" it, but said it was "conceivable" and became aggravated when she attempted to ask a follow-up question.

"I need to be correct as best I can," Sessions said. "And I'm not able to be rushed this fast. It makes me nervous."