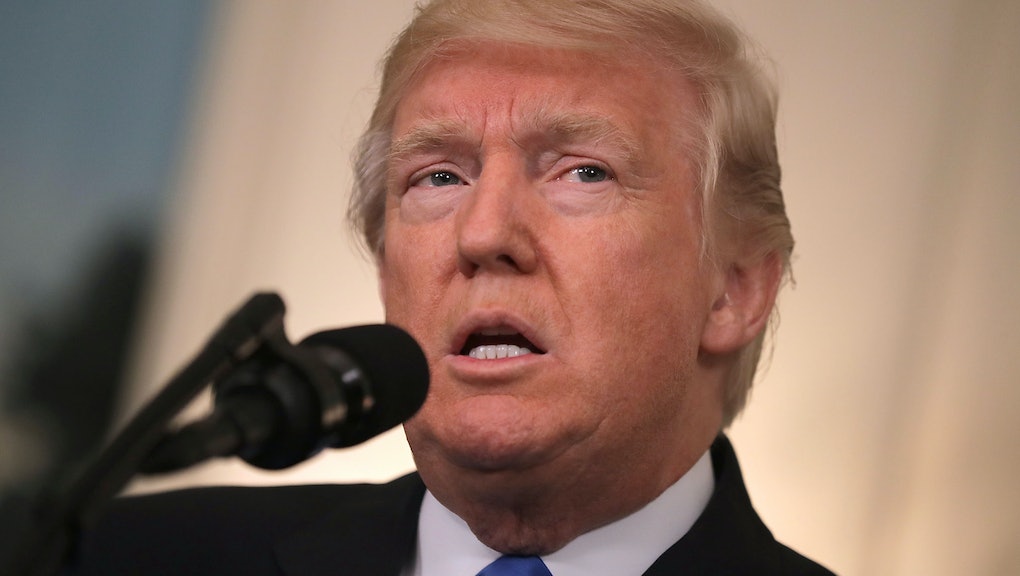 Five officials briefed on the matter say Robert Mueller, the special counsel overseeing the FBI investigation into Russian interference in the 2016 election, is investigating President Donald Trump personally for possible obstruction of justice, the Washington Post reported on Wednesday.

According to the Post, a bevy of high-ranking officials including Director of National Intelligence Daniel Coats, National Security Agency chief Mike Rogers and Rogers' former deputy Richard Ledgett have all agreed to be interviewed. The officials added Mueller is investigating Trump's associates for "any evidence of possible financial crimes," the Post reported.

Opponents have long accused Trump of possibly coordinating his campaign to maximize the damage done to Democratic nominee Hillary Clinton with Russian hackers who leaked embarrassing emails from her campaign and the Democratic National Committee. Little hard evidence has yet emerged to support the allegations.

But a veritable mountain of circumstantial links has emerged — ranging from Trump's friendship with GOP operative Roger Stone, who has links to Russian hacker Guccifer 2.0, to former national security adviser Michael Flynn, who was fired for lying to administration officials about a secretive pre-inauguration phone call with the Russian ambassador and was later revealed to have taken Russian money.

Just as consequentially, the president has repeatedly acted in ways somewhat suspicious for a supposedly innocent man. Trump fired FBI Director James Comey, who was overseeing that agency's counter-intelligence investigation into the Russian interference, and subsequently bragged to Russian officials visiting the White House terminating the "nut job" had eased "great pressure."

During later testimony before the Senate Intelligence Commitee, Comey called the president a liar, said Trump had tried to cultivate a "patronage" relationship with him, and pressured the FBI director to shut down parts of the inquiry tied to Flynn.

In recent days, Trump has reportedly been mulling the idea of firing Mueller, who DOJ Deputy Director Rod Rosenstein appointed in the subsequent chaos of the Comey firing. According to the New York Times, sources say the president was only turned off from the idea by staffer who said such an action could "turn a bad situation into a catastrophe," though said sources said the only thing stopping him was the idea the threat of firing Mueller would speak for itself.