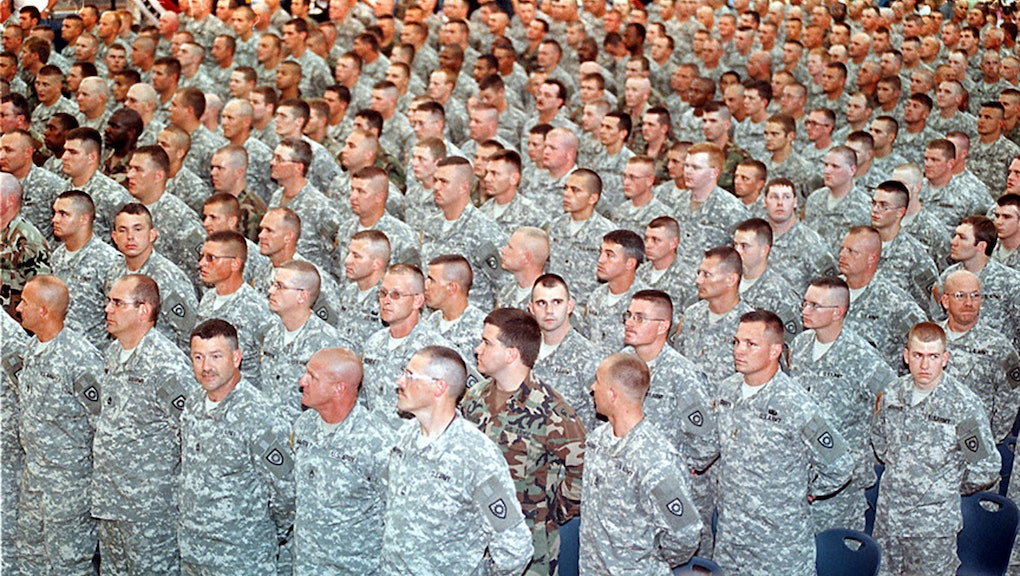 Four soldiers in the Kentucky National Guard have been arrested following allegations that they gave a minor alcohol and forced her into sex. According to CNN, it's possible — although unconfirmed — that the victim is herself a soldier in the National Guard.

Anthony Tubolino, Tyler Hart, Austin Dennis and Jacob Ruth were arrested on June 3, shortly after the assault is said to have occurred. They were reportedly partying in a hotel room with the underage woman in Calloway County, Kentucky, where they were stationed for training drills. The men allegedly gave the woman liquor before raping her.

The woman reported the incident the same day, prompting police to arrest the soldiers, who now face different charges, according to CNN: Tubolino, 25, is charged with second-degree rape, second-degree sodomy and unlawful transaction with a minor; 19-year-old Hart, with first-degree sexual abuse and second-degree sodomy; Dennis, 21, and Ruth, 22, with one charge each of second-degree sodomy. They have since been released on bail.

"The alleged victim in this case was a willing participant and while she may have been intoxicated, was not unconscious," Simpson said. "We look forward to defending his name and reputation."

Calloway Commonwealth Attorney Mark Blankenship acknowledged that alcohol could complicate the case, but that the woman's drinking "doesn't mean she consented."

Whether or not the alleged victim in this case can be considered a "willing participant," though, could be a question of age. Despite reports that she is a minor, her age hasn't been released. But in Kentucky, only people 16 or older can consent to sex, and sex with a person younger than 18 is considered statutory rape if one party is in a position of trust or authority with respect to the other. Meanwhile, only applicants between the ages of 17 and 35 are eligible to join the National Guard.

Maj. Gen. Stephen Hogan, adjutant general in Kentucky's National Guard, roundly condemned the alleged assault, pointing out that it "is not only a reprehensible act, it is a criminal act."

"First and foremost our goal is to support the victim of this incident," Hogan told CNN in a statement. "It is damaging to our morale, to our readiness and to our combat ability. It has no place in the Kentucky National Guard. It goes against all the values we hold dear as service members in the U.S. Military."

Be that as it may, sexual assault seems to happen fairly often within the ranks of the armed forces. The most recent example comes in the form of a nude photo sharing scandal, in which a Facebook group composed mostly of Marines was outed as a revenge-porn hub where service members could swap compromising pictures of their female colleagues. Sexual abuse in the military disproportionately affects women: An estimated 32% of female veterans report experiencing sexual trauma during their service, compared to 5% of men.

According to CNN, only Dennis has entered a plea: not guilty. The others will be arraigned this month.