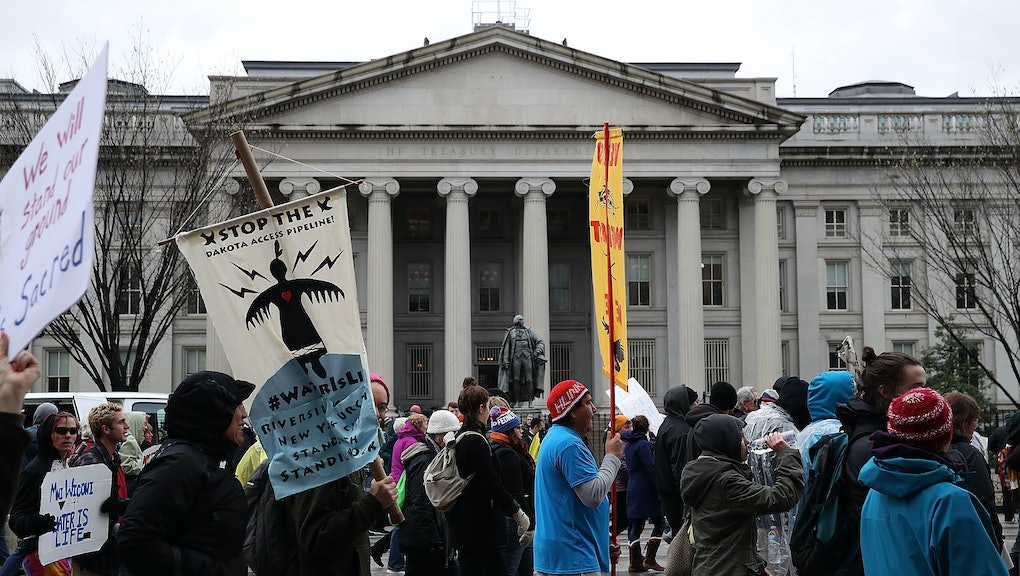 The fight against the Dakota Access pipeline has been a tumultuous cycle of small victories and big defeats. But even as oil flows through the pipeline, a federal judge might have delivered one more hope to the Standing Rock water protectors.

U.S. District Judge James Boasberg handed down a memorandum opinion Wednesday demanding a new look into the possible environmental impact of the pipeline, which has already sprung multiple leaks. It won't stop the oil flow necessarily, but the judge's opinion is a small victory for the Standing Rock Sioux, who have been taking their fight to the courts since the encampments were disbanded in February.

Shortly after President Donald Trump took office, he issued an executive order expediting the permit process and granting permission for the Army Corps of Engineers to continue building the pipeline across the Missouri River.

Boasberg's new ruling calls that order into question. Citing "environmental justice" over a dozen times throughout the opinion, the court demanded that the Army Corp of Engineers revisit their environmental impact evaluations in further deliberations with the judge.

"Although the Corps substantially complied with [National Environmental Policy Act] in many areas, the court agrees that it did not adequately consider the impacts of an oil spill on fishing rights, hunting rights or environmental justice, or the degree to which the pipeline’s effects are likely to be highly controversial," Boasberg's opinion read.

This won’t stop oil from flowing through the Dakota Access pipeline from North Dakota to Illinois. The pipeline began operations on June 1, and the new hearings will begin on June 21. The new study could set a precedent for future pipeline struggles across the country — of which there are many — but there's no indication that even a damning report could stop the flow of oil.

Back at Standing Rock, the resistance camps are largely demolished and uninhabited. Police swept through the camps in February with an evacuation order from the governor, arresting both activists and journalists alike as the water protecters ceremonially burned the last of the remaining structures.

Battling the pipeline in court with further reviews of the environmental impact could be the last hope the Lakota Sioux have in defending their fight the pipeline’s construction on treaty lands.