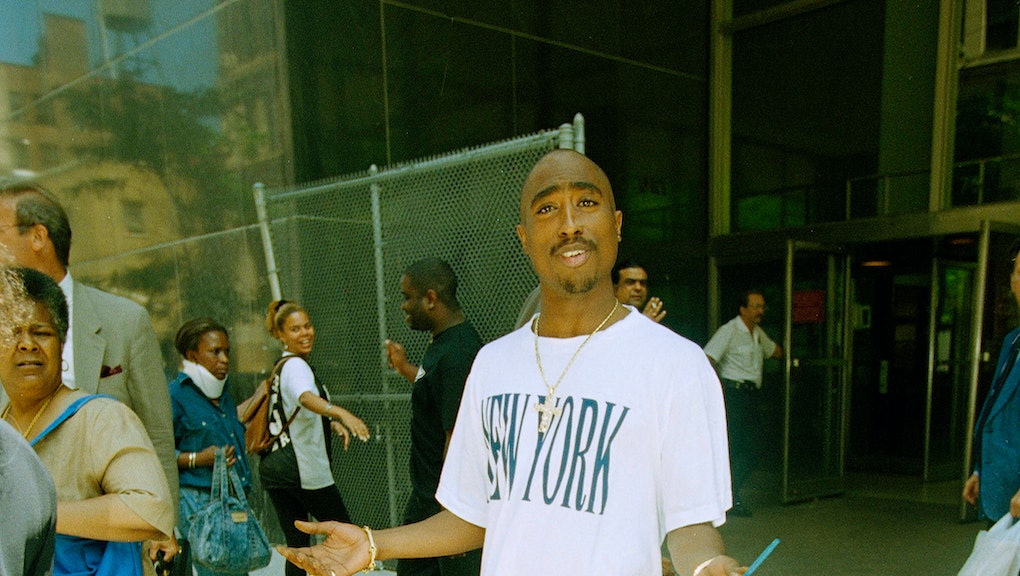 Like Tupac Shakur himself, 'All Eyez on Me' is way better at confronting racism than misogyny

When my colleague Kevin O'Keeffe interviewed All Eyez on Me director Benny Boom recently, he asked the filmmaker why his Tupac Shakur biopic only presented the rapper's account of a 1993 incident in which Shakur was accused of sexual assault.

"We told it the way Pac told it," Boom explained. "There are interviews that he gave that directly connect to the way that we shot the movie: When he talks about getting the massage, going into the room, falling asleep, waking up to [Ayanna Jackson] knocking on the door, screaming at him, and he has no idea what she's screaming about."

The incident in question involves a sexual assault that allegedly took place in a New York City hotel room Shakur was staying in during November 1993. After having sex with Ayanna Jackson, who was 19, Shakur claimed to have left her alone with three associates, who she said gang raped her.

Jackson disputed Shakur's account, saying he was present for her assault and even held her down while the others violated her. The incident led to the Shakur's imprisonment, and by some accounts, a major turning point in his artistic development.

The decision to present Shakur's version as true is a creative choice by Boom — but it's also a political one. On the creative side, Boom makes the dubious excuse that this is Shakur's story, and is only being told from Shakur's perspective. (As O'Keeffe pointed out, this subjectivity is clearly broken at least once: when the Notorious B.I.G. is turned away by bodyguards as he tries to visit Shakur in the hospital.)

But the political decision is far more insidious: Amid overwhelming statistical evidence that sexual assault against women is remarkably common, vastly underreported and rarely subject to false reports — between 2% to 10% of rape claims are false, according to a series of studies compiled by the National Sexual Violence Resource Center — the filmmakers still opted to roundly dismiss the female accuser's version of events.

By making this choice, Boom and company stand among the many Americans who err on the side of casting female alleged rape victims as liars. They've done so uncritically, based on a "he said, she said" version of what took place and in the absence of much hard evidence from either side. (Jackson's story is alluded to briefly in newspaper headlines saying Shakur was charged with rape — a direct contradiction of what the audience sees, which is Shakur falling asleep and waking up to the woman screaming at him; Shakur was nonetheless convicted and sent to prison for "forcibly touching" Jackson.)

Rhetorically, this decision illustrates just how casually disbelieved female rape accusers still are, especially by men. But it also reflects a broader trend. In at least one more recent high-profile instance, a similar account of famous black male entertainers displayed a far more nuanced approach to racial realities than to intersectional gender realities. All Eyez on Me is just the latest example.

I've written before that Shakur's alleged involvement in Jackson's assault remains an overlooked part of his legacy — a legacy paradoxically defined by his passionate advocacy for the plight of black Americans, including black women, under a nation largely defined by white supremacy and anti-black violence.

But he's also far from the only entertainer to be lionized while his mistreatment of women is largely glossed over. The 2015 film Straight Outta Compton, which documents the rise and fall of N.W.A, completely skips Dr. Dre's history of domestic violence, including his brutal assault of journalist Dee Barnes. Both examples seem especially relevant this week, as a mistrial was declared Saturday in the sexual assault trial of black TV icon Bill Cosby, whose alleged history of sexual violence has brought him back into the national spotlight.

In the cases of Shakur and Dre, both men made powerful, honest music about police violence and racial inequality, while frequently disparaging women in their art and either abusing them — in Dre's case — or mistreating and allegedly assaulting them — in Shakur's case — in their personal lives. Both left behind black female victims whose stories almost never get told, while they became cultural icons. And they did so while providing nuanced, revelatory and vital commentary on American racism — commentary that popular accounts of their lives still emphasize over any honest reckoning with their relationship to women (though All Eyez on Me is admittedly better about this than Straight Outta Compton).

Audiences are left, then, with the nagging feeling that the filmmakers' approach to the truth is selective in a way that fails women specifically. This is further apparent — in All Eyez on Me — when Shakur shoots two white men in Atlanta who turn out to be undercover police officers. Like with Jackson's assault, there are conflicting versions of what really happened. The media and the police both allege the two men were simply walking across the street when Shakur's car collided with them and the rapper shot them. Shakur's version — which is depicted in the movie — claims the men were beating up a black man on the sidewalk and Shakur stepped in to intervene, only firing his gun after the men pulled guns on him and called him a "nigger."

Shakur's version — per Boom's mandate — is the version audiences are meant to believe. Loyalty to Shakur's point of view in this scene reflects how central his perspective is to the film's presentation. Yet a little while later, Shakur is shown to be someone whose version of the truth we can't necessarily trust. When the emcee is shot at a recording studio in 1994, he blames Biggie for setting him up — even as the filmmakers insert multiple scenes proving that Biggie was in no way involved.

Meanwhile Jackson, the alleged rape victim, is portrayed unequivocally as a liar. This casual repudiation of her story, when compared to Boom's treatment of the police shooting incident, seems to illustrate how much more comfortable the filmmakers are accepting that police officers lie — a revelation for many Americans, but a truth that black people have spoken about for years — than they are with the fact that women who say they've been sexually assaulted typically do not.

And Jackson is not the only female character whose truth the filmmakers take significant liberties with. The dynamic grew even more pronounced on June 16 — the day the film was released, and also what would've been Shakur's 46th birthday — when Shakur's close childhood friend, actress Jada Pinkett Smith, lambasted how Boom and company portrayed her relationship to Shakur in the film. "The reimagining of my relationship to Pac has been deeply hurtful," Smith tweeted.

All Eyez on Me has plenty of other problems, from a filmmaking standpoint. It is cliched, overlong and only rarely transcends the histrionics of a Lifetime TV movie. But by far its biggest misstep is its regressive treatment of Jackson's story — and by extension, any suffering woman who has been forgotten in the shadows during a famous man's rise. The certainty with which the film rebuffs her story is irresponsible, not to mention cruel: The first shot we see of the character — named "Brianna" in the film — is a close-up of her swaying backside, sexualizing her in a way that leaves an especially sour taste after she is raped.

This was not a hard topic to treat sensitively. The filmmakers could have left far more ambiguity around the incident, at the very least, if they didn't want to directly affirm Shakur's guilt or innocence. But instead, they chose to cast Jackson as an outright liar — and didn't even bother to give her character motivation for doing so, thus perpetuating the notion that women simply lie about this sort of thing. Shakur's messy, complicated legacy deserves better than what All Eyez on Me has given it. And as with during the rapper's lifetime, so do his female fans.