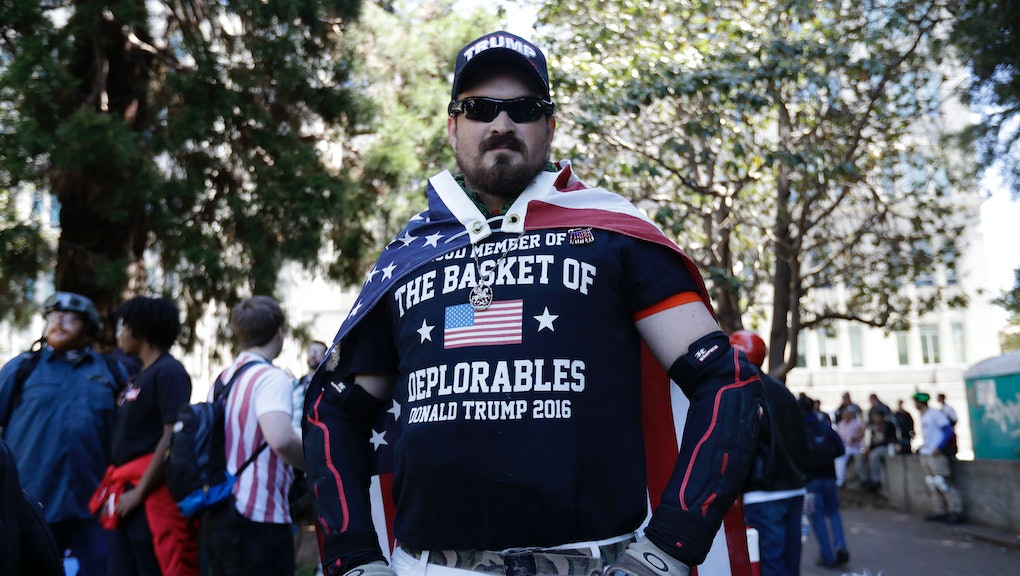 Before inauguration day this year, North Americans didn't have to hear the word "antifa" thrown around much. In case anyone doesn't know yet: Antifa is short for "anti-fascist," and consists of any coalition, typically of leftists, communists and anarchists, that standing up to perceived threats of fascism, often by showing up to protest right-wing rallies and speeches.

But to hear conservatives tell it, "antifa" can mean almost anything at all. In order to ratchet up fear of a left-wing terroristic threat, conservatives are calling everything they don't like antifa, with baffling, hilarious and even scary results.

One illustratively absurd example comes from an article, published Thursday by the traditionalist news site Rebel Media, about an 8-year-old boy who does drag performance. The headline of the story is "Eight-year-old drag queen the product of Antifa parenting?"

What exactly is antifa parenting? No one knows — antifa are never mentioned in the article, and there is no direct ideological connection between anti-fascist black blocs and drag performance.

When intra-right wing scuffles broke out between the alt-right and militiamen with the Oath Keepers, a constitutionalist group made of military and police veterans, white supremacist corners of the internet called them the "boomer antifa" for, as the Washington Post put it, "not being racist enough." This example is particularly absurd, seeing as the founder of the Oath Keepers told Mic in May that the antifa are distinctly his enemy.

When Swedish police clashed with migrant youth — immigration in Sweden is another topic of obsession for far right media — one right-wing blog wrote that the use of masks shows that "antifa tactics are popping up among jihadi youth." In another instance, a pro-Gamergate journalist wrote that the upcoming game Detroit: Become Human "channels antifa" because the trailer for the game includes a human rights protests where a window is broken.

The instinct to label everything "antifa" comes from a recent effort by the right-wing media to dial up the threat of left-wing violence by portraying individual protests as the beginning of a broad, terroristic threat. The National Review, Breitbart and Fox News personalities like Sean Hannity and Tucker Carlson have spent months promoting the idea that anti-Trump sentiment is the beginning of a trend toward extreme leftist violence.

Mainstream conservative media is more careful about choosing who constitutes "antifa," but the new right-wing media has a burgeoning cast of new personalities, bloggers and YouTubers who aren't concerned with meeting even the basest journalistic standards.

Though there's a certain hilarity in trying to decipher what a reactionary blogger could possibly imagine constitutes "antifa parenting" — making your kids cover their cell phone cameras with a sticker before leaving the house, perhaps — but the language is bleeding out from the internet and into dangerous territory. In Portland, when 35-year-old Jeremy Joseph Christian killed two men for standing up to his Islamophobic rhetoric, he justified himself with the same pro-"free speech" mantras shouted at alt-right rallies.

"Death to antifa!" he shouted in court.