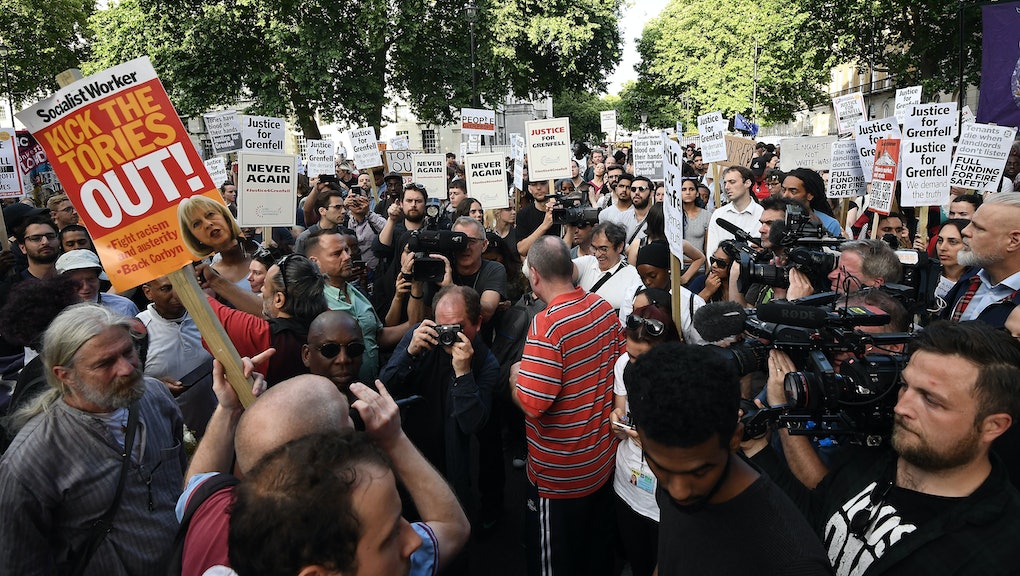 Armed with signs stamped with "JUSTICE FOR GRENFELL" and "NEVER AGAIN," protesters took to the streets of London on Friday afternoon to call for justice for the victims of the Grenfell Tower fire.

The blaze, which began in the early hours of June 14, claimed at least 30 lives, with dozens more reportedly still unaccounted for.

Despite its location in the posh inner-London borough of Kensington and Chelsea, Grenfell Tower was comprised of social housing apartments that housed mostly working-class residents and families — tenants who now say that they had voiced concerns about the building's infrastructure long ago, only to have their fears dismissed by management.

On Friday, protesters flooded the streets to demonstrate against the British government's response to the disaster, with particular ire reserved for Prime Minister Theresa May.

According to the Guardian, local residents became frustrated after May swiftly departed after her visit St Clement’s church on Friday, leading to cries of "shame on you" and "coward" from a large crowd that had assembled to hear her speak.

"We were looking for her to say that she is here with the community," Simon McDonald, who grew up in the area, told the Guardian. "She just needed to say a few words of comfort."

Elsewhere, an angry protester attempted to rally the large crowd to march on the Prime Minister's residence on Downing Street.

"Theresa May is not fit to be PM," the man can be heard saying in a video captured at the scene. "Council housing used to be safe, affordable. We could put out children to bed and know they would get up in the morning."

By contrast, Labor Party leader Jeremy Corbyn's response to the deadly blaze was suggest the "requisitioning" some of the expensive empty homes of the Kensington elite to ensure that displaced residents have shelter.