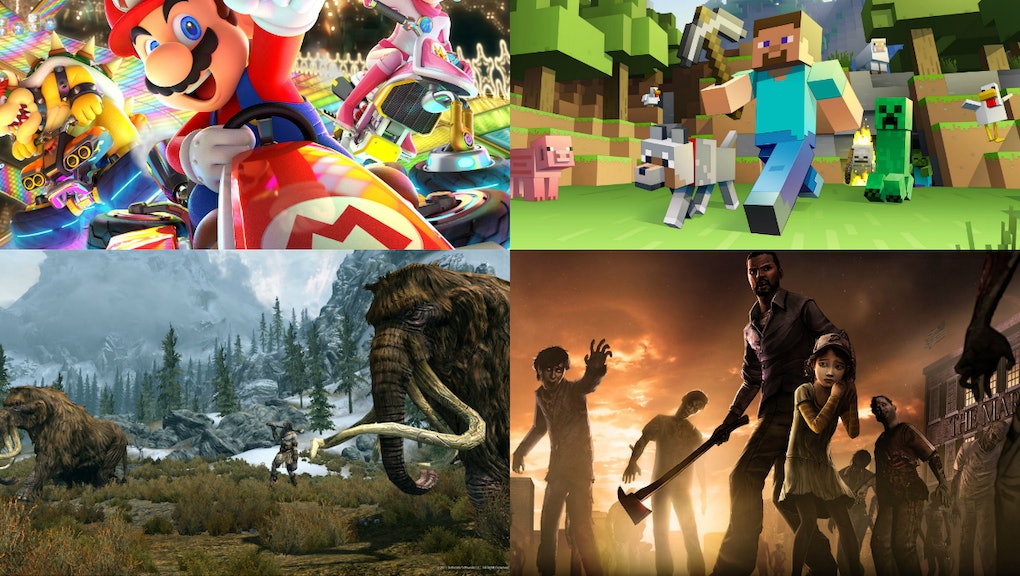 Father's Day 2017: Five titles to get your dad into video games

It's Father's Day around the world, and families are celebrating the day by heading out to theme parks, having cookouts and enjoying lots of other fun activities. But some dads are chilling out and playing a few good video games with their families on this day.

Not all dads are into gaming, but it could be because they don't know where to start in the wide world of video games. If you think your dad might be interested in playing but need help introducing him to games he might enjoy, we've got five suggestions that dad can get down with, from sandbox games to cinematic adventures.

Everyone loves Minecraft, and it's incredibly simple to get into with several layers of complexity for players who decide they want to go that far. Plus, it's available on just about every console. Dad can enjoy building his own home and other awesome things in the sandbox game, or he can survive the night as long as he can while erecting an empire.

There are dozens of skins that can outfit your character in-game and hundreds of mods for the PC version that can even turn base Minecraft into something decidedly different. If your dad loves to tinker with things or spend time on his own creations, Minecraft is an excellent choice.

It doesn't have a monthly subscription fee, either, so you can grab dad an account with a full -paid copy of the game and let him run wild. Just don't be surprised if he gets entirely lost in the vast world of Minecraft.

If your dad is keen on RPG adventuring, get him started with one of the finest entries in the Elder Scrolls mythos. The Elder Scrolls V: Skyrim is a massive undertaking with plenty of stuff to do, and it's easy to get into with no prior knowledge of the previous games required. It's available on both consoles from the previous generation, PC, and it's even coming to Nintendo Switch in the near future. It's a compelling and addictive adventure, especially for fans of high fantasy and looting. Those two generally go hand in hand, so you know.

Chances are your dad's into shows like The Walking Dead or movies like Guardians of the Galaxy. If he's always scrambling to catch his favorite TV series or looking forward to summer blockbusters every week, he'll probably enjoy the Telltale series of adventure games.

Focusing mainly on presenting players with choices and blending them with cinematic scenes, these games are both accessible and entertaining. Running the gamut from Game of Thrones to Back to the Future, there's something for everyone.

Dad will love squaring off against Ramsay Bolton and figuring out the best way to screw him over in the gripping Game of Thrones side story. He'll be right in the middle of the action as he leads survivors to safety in The Walking Dead. In fact, he might enjoy the Telltale game series more than watching the series and movies many of the properties are based upon.

Dads and building usually go hand in hand, and Cities: Skylines has a lot to offer for both casual and hardcore fans of games like SimCity. Dad can map out a city of his own, build roads and keep an entire urban population happy with this clever little title — and have fun doing it. It's an excellent gateway game into other strategy and management titles, and there are even expansions for dad if he wants to take it further.

Mario Kart is for everyone, and if your dad enjoys racing of any kind, he'll find something to love about the definitive edition of Mario Kart 8 on the Switch. Mario Kart 8 Deluxe is a gem that deserves to be one of the crown jewels of anyone's Switch collection, as it's managed to distill everything good about Mario Kart as a whole into one package.

Dad will no doubt love steering one of several Mario-themed karts around tight corners and throwing blue shells at the competition, all the while cackling as they wipe out. He may even have enjoyed the original Mario Kart with you when you were younger, and this will take him back. And if this is the first game your father has ever played, it's certainly a good gateway drug into the colorful world of Mario.