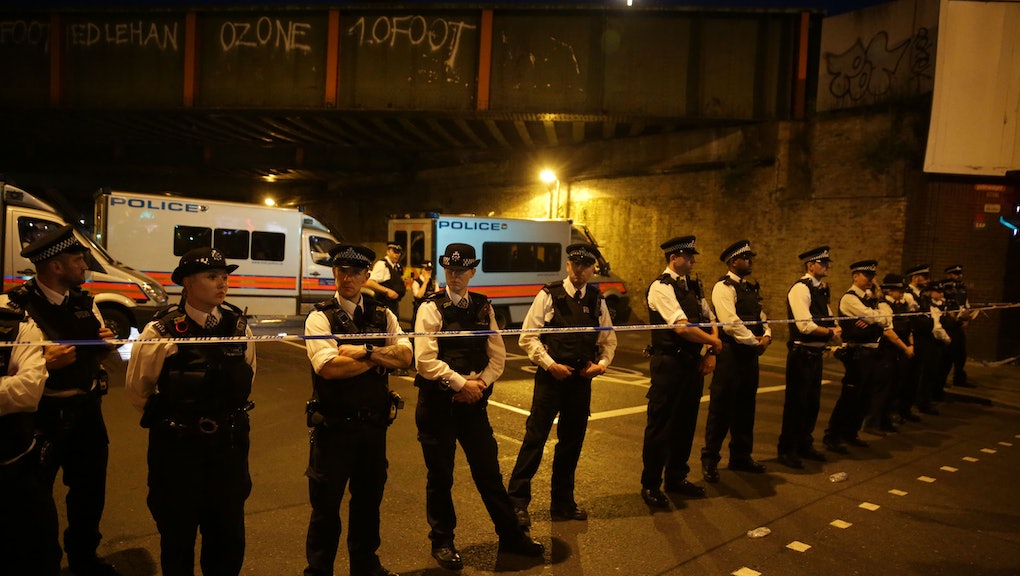 One person is dead and at least eight are injured after a van collided with pedestrians in north London's Finsbury Park around midnight local time on Sunday, according to the London Metropolitan Police.

The driver of the van, a 48-year-old man, was arrested at the scene, the police statement indicated.

U.K. Prime Minister Theresa May said police are treating the incident “as a potential terrorist attack,” the Guardian reported. She said she will chair an emergency meeting later Monday morning. Earlier, May described what happened at Finsbury Park as a "terrible incident.”

Sky News reported the incident happened as people were leaving a mosque after prayers.

“We don't yet know the full details, but this was clearly a deliberate attack on innocent Londoners, many of whom were finishing prayers during the holy month of Ramadan,” he said in the statement.

A tweet from the Muslim Council of Britain said it had received reports that the attacker had deliberately targeted Muslims leaving late-night prayers.

“We have been informed that a van has run over worshippers as they left #FinsburyPark Mosque,” the tweet read.

The incident reportedly occurred near the junction of Seven Sisters Road and the A503 Tollington Road.

Video purporting to be from the scene shows injured people lying on the ground, with other members of the crowd offering assistance.

One eyewitness told the BBC that she heard people on the street shouting, 'a van's hit people'.

"There was this white van stopped outside Finsbury Park Mosque that seems to have hit people who were coming out of the mosque after prayers finished," the woman said.

Eight people were taken to three London hospitals, Kevin Bate, the deputy director of operations for London Ambulance Service, said in a statement. "A number of patients were also treated at the scene for minor injuries."

"Our thoughts are with all those affected by the incident at Seven Sisters Road and their friends and family," Bate added.

Mohammed Kozbar, chairman of the Finsbury Park Mosque, described the incident as a "cowardly attack."

Jeremy Corbyn, leader of the U.K.'s Labour Party, said on Twitter that he was "totally shocked at the incident at Finsbury Park tonight."

The United Kingdom has seen a spate of deadly terror attacks in 2017. In March, an attack outside London's houses of Parliament left five people dead, including the attacker, and around 40 people wounded. The Islamic State group, also known as ISIS, later claimed responsibility for the attack. ISIS also claimed responsibility for a deadly May bombing in Manchester Arena that killed 22 concertgoers and a June terror attack on London Bridge that left seven dead.

The incident happened within the last days of Ramadan, which is considered to be the holiest time of the month, a time where attendance at mosques are often higher than normal. The last 10 nights of Ramadan contains Laylatul Qadr, or “the Night of Power,” which is believed to be the night when God revealed the first revelation of the Quran to Prophet Muhammad.

Sarah Harvard and Jordyn Taylor contributed to this report.