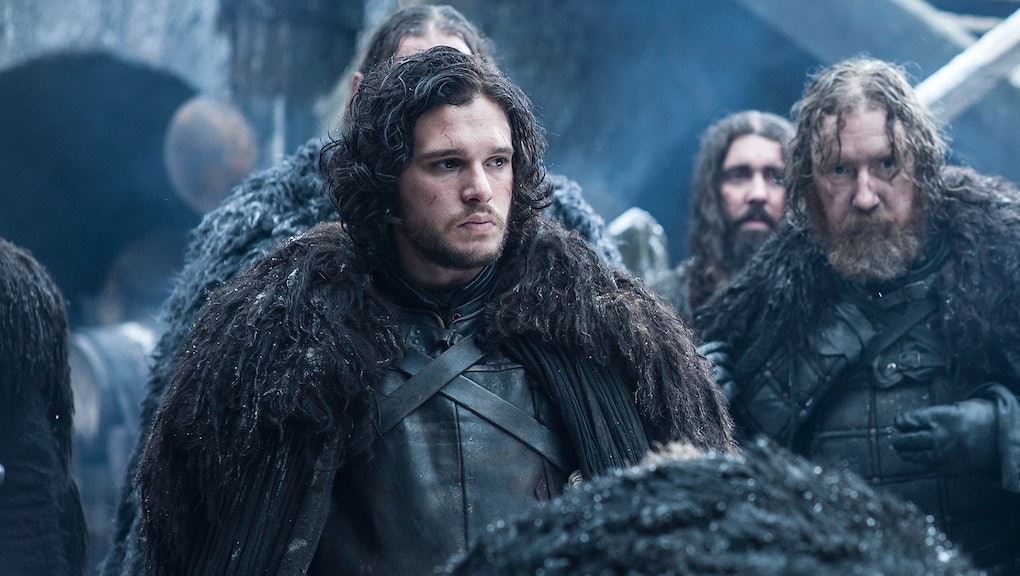 Everything we know about Jon Snow's parentage on 'Game of Thrones'

A popular fan theory about Jon Snow's true name was recently leaked by Empire Magazine. It was subsequently shared on Reddit, and diehard Game of Thrones fans are now screaming: "I knew it!"

The leak came from an assumption the magazine made from an interview they conducted with actor Isaac Hempstead Wright, who plays Bran Stark, about the upcoming seventh season. The post on Reddit shows a clip of the article — titled "Bran's sitting on a huge secret" — in which Empire states Jon Snow's real name is Jaehaerys Targaryen. It is, however, important to note the accuracy of this name has yet to be officially declared by the series' creators.

When the season 6 finale aired, fans read Lyanna Stark's lips to decipher what she whispered to Ned before she died — that her son's name is "Jaehaerys," after the longest-reigning Targaryen in history.

Jon Snow's parents have one heck of a history

In the season six finale, Bran's ability to send his consciousness through time to witness past events revealed that Jon Snow's mother is really Ned Stark's sister, Lyanna. Lyanna was presumed to have been captured by Prince Rhaegar Targaryen, making it safe to assume Rhaegar is Snow's father, thereby proving the long-argued R+L=J theory.

But was Lyanna really captured, or were she and Rhaegar star-crossed lovers à la Romeo and Juliet? According to the books, it's the latter.

Before her untimely end in the Tower of Joy — where Ned finds Lyanna and baby Jon (or perhaps baby Jaehaerys?) in Bran's vision — Rhaegar named Lyanna the "Queen of Love and Beauty" rather than his wife after winning a joust at the Tourney of Harrenhall. That's why he took Lyanna to the Tower of Joy — because he was trying to protect her from the impending war between his father, the "Mad King" Aerys II, and the prominent houses of the North. It's also why the war came to be known as "Robert's Rebellion," for Robert Baratheon — who ultimately killed Rhaegar in the Battle of the Trident — as Lyanna and Ned's father, Rickard Stark, had promised Lyanna to Robert.

That's right, Game of Thrones theorists; there is no denying now that Jon Snow is really a Targaryen. And that also means that he's very likely the legendary "Prince who was promised" prophesied in the religion of the Lord of Light.

Who is the original "Prince who was promised"?

For those unfamiliar with this prophecy, which Melisandre explains in season six, a prince named Azor Ahai once saved the world from darkness using a flame-engulfed sword called "Lightbringer."

Lord of Light followers, like Melisandre, believe a hero will be reincarnated as Azor Ahai and save the world from perpetual darkness, aka the epic winter that's now engulfing Westeros. Melisandre once thought that hero was Stannis Baratheon, but she changed her allegiance to Jon Snow following Stannis' death. The so-called Lightbringer could be Snow's sword Longclaw, which is Valyrian steel, and thus capable of killing White Walkers.

Of course, it's also just as possible that Daenerys Targaryen is Azor Ahai, since she is literally the harbinger of dragon flame, and she too was reborn. Rhaegar was Daenerys' brother, so if Jon is his son, that would make him Daenerys' nephew. That definitely makes the fan theory that Daenerys and Jon get married a little bit gross, but barely even registers as incestuous by Targaryen standards.

That said, there is still room for a major revelation if and when these two presumed family members meet.