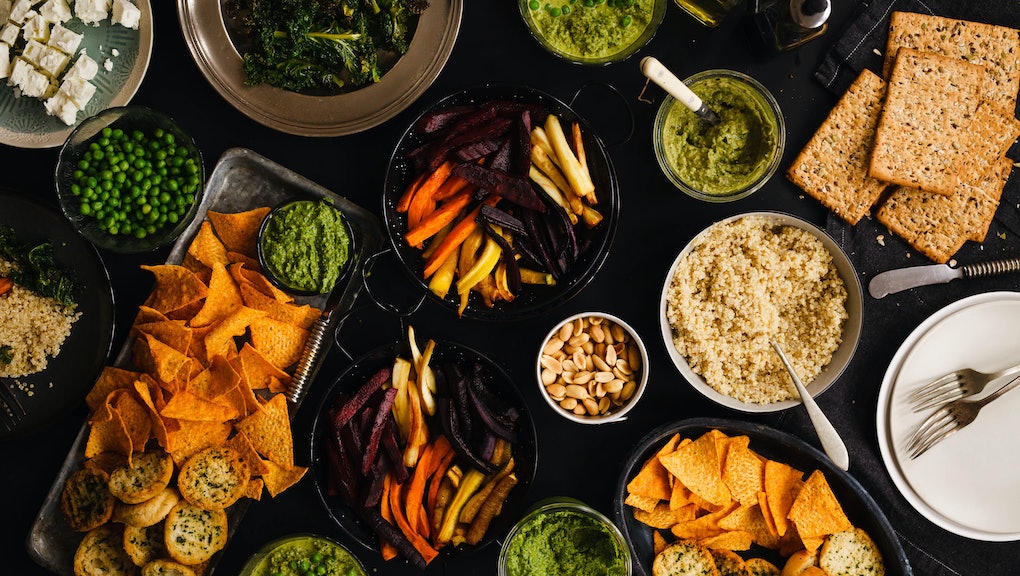 How to eat less meat without going fully vegetarian

Consuming less meat is a good goal. It can ward off the risk for several life-threatening illnesses. It can reduce greenhouse gas emissions. It could even help ensure a better water supply for millions of people. But whether bacon causes you to go weak in the knees or the idea of tofu makes you tremble, you can eat less meat without going completely vegetarian. It will still make an impact.

“People think of meat consumption as an all-or-nothing premise — either you're a vegan or you're an omnivore,” Brian Kateman, author of Reducetarian, said in an interview. But the paradigm is limiting and unnecessary: Every time you eat food, you have a choice to eat meat or not. Kateman’s book encourages limiting meat consumption in whatever way works best for each individual.

You don't even have to call yourself a reducetarian to follow its premises. The average American eats close to 200 pounds of meat each year. Bringing that number down by any increment is a win, no matter how much you love steak, and there are several simple ways to do it. Kateman offered a few actionable tips for cutting down on meat so you can choose the one that seems best suited to your lifestyle; check them out below.

As its name implies, Meatless Monday means abstaining from meat products on the first day of the work week. Why Monday? According to the rationale published on the international movement’s website, “Monday is the beginning of the week, making it the perfect time to reevaluate our choices and set our intentions for the coming days.”

That said, if Monday is burger night in your household, do a Meatless Wednesday instead — this strategy is about setting a schedule that you can stick to. This commitment works, Kateman said, because it’s guaranteed to come around once a week and it actually makes a big difference. Cutting meat from your diet one day a week can reduce your meat consumption by 15%.

Be a weekday vegetarian

If you’ve mastered going vegetarian one day a week and want to go a step further, try Graham Hill's strategy, which calls for eating nothing with a face Monday through Friday. “I realized what I was being pitched was a binary solution; it was either ‘you're a meat eater’ or ‘you're a vegetarian,’ and I guess I wasn't quite ready,” Hill explained in his 2013 TedTalk.

Similar to Meatless Monday, Hill said this strategy works for him because “it’s structured so it ends up being simple to remember,” and even said breaking the rules “here and there” is totally fine. As he noted, cutting out meat five days a week reduces your meat intake by a whopping 70%, so bending the rules a little isn’t the worst thing. When you do follow the guidelines, the weekends are your time to go ham (literally).

Eat meat only for dinner

The so-called vampire-style diet (no blood until nighttime) — which Mark Bittman also preaches in his Vegan Before Six book and lifestyle — recommends eating only plant-based foods for breakfast and lunch, and incorporating meat for dinner. It's another take on structure that helps to reduce — not nix — meat consumption, Kateman said. There are some guidelines to this way of eating; as Bittman noted on his site, just because something is vegan doesn’t mean it’s healthy. Sustaining solely on french fries before dinnertime, for example, isn’t exactly doing it right.

If you think this lifestyle might leave you famished during the day, Bittman has some advice: “People sometimes think vegan food is rabbit food,” he wrote. “But this is real food. Fruits and vegetables, whole grains, nuts, legumes — you have plenty of options.” Bittman claims to have lost 15 pounds within the first month of going vegan-before-six.

Choose whatever commitment suits you best. The really important thing here is to not overcomplicate your meals — doing so can lead to throwing in the towel altogether, Kateman said. When he first started, he'd substitute the vegetarian option in for his standard favorites, like ordering a vegetarian burrito or getting tofu instead of beef in fried rice. Over time you can get more sophisticated, Kateman noted.

And before you worry that this is going to drive up your grocery bill, research shows keeping a vegetarian diet can actually save you around $750 annually.

Don’t worry so much about protein

There’s a common misconception that neither vegetarians nor vegans can possibly get enough protein, but the truth of the matter is that the average American consumes more protein than their body needs, Kateman said. Vegetarian proteins like quinoa, lentils, nuts — even spinach — exist in nature and do a great job of building muscle and keeping humans satiated. “The thing with getting full is to eat foods with lots of fiber,” Kateman said, noting that one of his favorite bases is combining beans and brown rice. What's really exciting (for those that like to eat, that is) is that you can eat a lot of vegetables and vegetarian proteins without eating close to the amount of calories you would with meat products.

Give up on being perfect

“This is not about being perfect or pure,” Kateman said, but about reducing your meat consumption. “The best way to start is just to try it out.” Kateman said being compassionate to yourself during your first test phase is important; the entire premise is to eat less meat than you once did. So remind yourself of your success every time you pick nachos topped with beans instead of beef, or the tofu burrito over the chicken one.