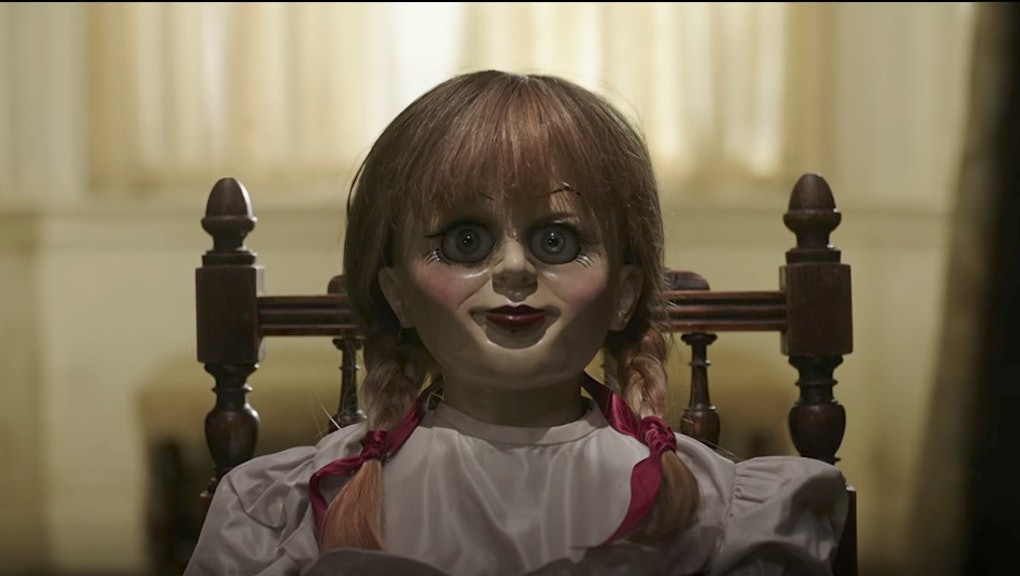 The second official trailer for Annabelle: The Creation dropped Monday, and while it looks sufficiently terrifying, it's not really in line with the doll's true origin story. It's also a departure from what's explained in The Conjuring, which preludes Annabelle in exploring the paranormal work of Ed and Lorraine Warren.

The Warrens founded the New England Society for Psychic Research in 1952 and investigated many real-life paranormal occurrences, including the Defeo murders on which The Amityville Horror is based. The Conjuring explores the haunting of the Perron family house in Rhode Island, which was also based on true events. However, early on in the movie, how the Warrens came to have the demonically possessed doll Annabelle in their collection of evil curiosities is explained.

Annabelle's story in The Conjuring

At the beginning of the film, three roommates tell the Warrens about how this doll has been tormenting them. They say it started out moving from room to room, and wrote "miss me?" on pieces of paper. They saw a medium, who told them the doll was possessed by a little girl named Annabelle Higgins who had died in that apartment.

The girls felt sorry for Annabelle, so they gave the ghost permission to live inside the doll. After that, things went from bad to worse. The doll eventually trashed their apartment and drew all over the walls in red crayon. When they tried to get rid of the doll, it mysterious came back.

Ed tells the roommates what they're experiencing isn't the act of a ghost, but rather an "inhuman spirit" — "something that has never walked the Earth in human form."

While the basic structure of the story retold in The Conjuring is similar to the real-life reported events, there are plenty of significant differences.

The true story of Annabelle

First of all, the doll in the movies is much more frightening-looking than the actual Annabelle. The real doll was just your basic Raggedy Ann doll that belonged to a young nursing student named Donna. The doll was purchased from a hobby store in 1970 by Donna's mother and given to Donna for her 28th birthday. Donna kept it in her apartment, where she lived with her roommate, Angie, who was also a nursing student.

The initial strange behavior the roommates noticed was that the doll seemed to change positions. Then it appeared to move to different rooms from where it had been left and holding notes reading "help us." Donna decided to go to a medium after coming home to find blood on the doll's hands and chest.

The medium experience was much like what appears in The Conjuring — the medium told the roommates the doll was possessed by the spirit of Annabelle Higgins, who had died on the property of their apartment. The women then gave it permission to inhabit the doll.

Reality and the movie split their paths at that point. Donna and Angie's friend Lou, who apparently hated the doll, claimed he was attacked several times by it. He said he once felt the doll slide up his leg then try to strangle him to the point where he passed out. On another occasion, he was inspecting a sound he thought was a burglar, then was clawed in the chest by what he assumed was the doll. The cuts, however, healed quickly, so there was no physical evidence.

The roommates did call the Warrens, who told them the same story that appears in the movie — that the doll isn't being inhabited by a spirit, but rather being manipulated by a demonic being trying to possess the women. In order to help the girls, the Warrens took the doll, locked it up in a display box in their own home, and had a priest exorcise the girls' apartment.

The story of Annabelle: The Creation

As for Annabelle: The Creation, the main crossover to real life is how Annabelle Higgins — the little girl the medium told Angie and Donna about — died. However, the movie doesn't claim to be based on true events, so poetic license around Annabelle's origin is to be expected.

Check out the second official trailer below.