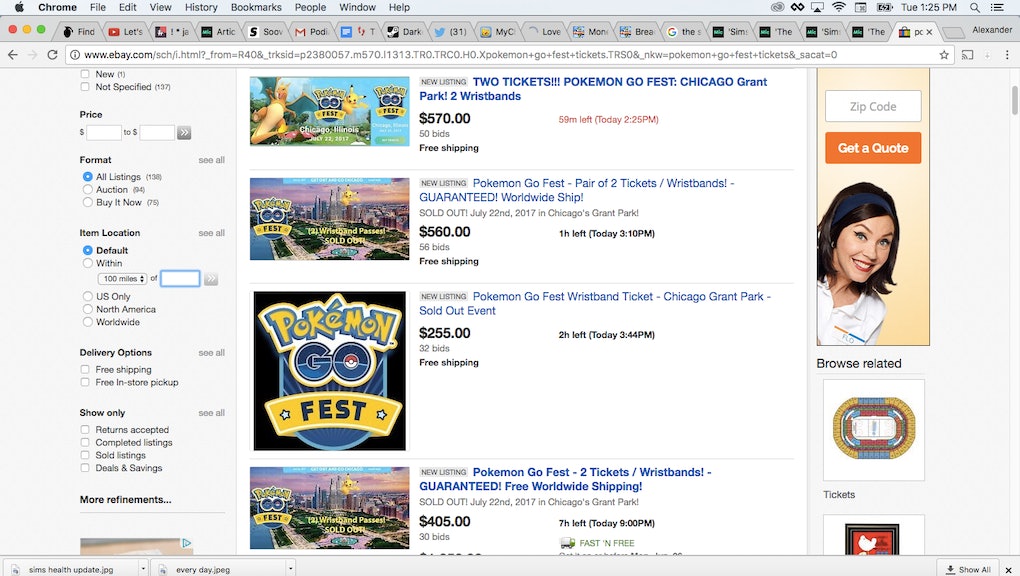 EBay 'Pokémon Go' Fest: Tickets for the sold out event get a huge markup online

In the span of about 30 minutes on Monday, tickets went live for Pokémon Go's summer festival in Chicago's Grant Park and were then sold out. If you're worried about missing the fun on July 22, you can still find tickets on eBay. The only issue is that scalpers are charging pretty obscene prices for secondhand tickets to the event.

EBay Pokémon Go Fest: Tickets are going for as much as $1000

If you punch "Pokémon Go Fest Tickets" into eBay's search bar, you'll get no shortage of hits — 138 at the time of reporting, to be exact — that advertise wristbands to the sold out event. The top hit, two wristbands currently at a $570 bid is ludicrous for a number of reasons. First, tickets on the official website yesterday were $20 before shipping and handling. That's 28.5x more than was expected. Second, this is an auction with 50 bids on it, which means that people are actually bidding.

If you'd rather skip the bidding and just guarantee your purchase, you can buy a set of two for $1250 immediately — that's double the asking price of the already overpriced first pair.

The bids, as Polygon previously noted, mean that this frankly astronomical price hike won't deter people from paying out the nose for these tickets — which is a risk in of itself since there's little recourse for anyone who gets swindled.

Before you shell out an obscene amount of money for tickets to Pokémon Go Fest, there are a few things you should keep in mind. Arguably most importantly is that Niantic has said that players outside of the event will also be able to celebrate and reap the rewards in spite of not being physically there.

Additionally, it might be helpful to remind yourself that none of the $600 or more you're paying for this ticket is actually going to go back to Niantic or the event organizers — everything above the $20 the scalpers paid is going straight to them. Ignoring arguments of side hustles and the gig economy, the fact of the matter is that when people buy these tickets for these prices, it's going to encourage scalping at the next event as well.

It always pays to think twice before supporting scalping, even where Pokémon are concerned. Tickets will continue to be scalped as long as there's a market for it.

Read more coverage on Pokémon, including Nintendo's comments on the rumored Pokémon Stars Switch game and news about GameFreak putting up a "now hiring" sign. Watch how well Sun and Moon could translate to Switch and why we won't see the game come to the home console this year — but at least we're getting portable Pokkén and Gold and Silver again.