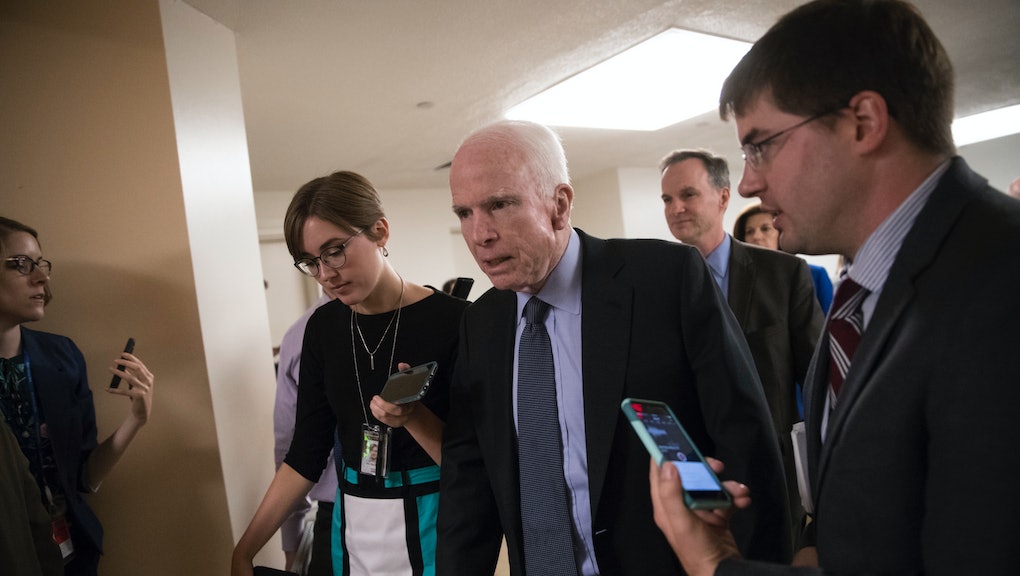 John McCain: I haven't seen the GOP's Obamacare repeal bill, "but I'm sure the Russians have"

Sen. John McCain says he hasn't seen the Senate version of the Republican bill to repeal and replace the Affordable Care Act — but he's pretty damn sure Russian spies have, according to Bloomberg.

Asked by Bloomberg about whether he's seen the bill, which is being prepared in secret by Republican leadership and will not be released publicly until at least Thursday, McCain responded, "No, nor have I met any American that has. I’m sure the Russians have been able to hack in and gotten most of it."

That's a pretty clear shot at GOP leaders in the Senate and allegations of Russian interference in the 2016 elections — the latter of which President Donald Trump has struggled through a rapidly expanding scandal over.

In another exchange, CNN's Phil Mattingly tweeted, McCain fielded a question about whether the lack of transparency was a problem. McCain sarcastically responded: "Oh no, never a problem. No, of course not. I always like to move forward with legislation that I haven't seen. That's one of the practices I've enjoyed around here."

But while McCain is griping about the process, he could probably do more than talk — he could threaten to withhold his support without an open hearing process for the bill, a bridge the senator has given no indication he has any intention to cross yet.