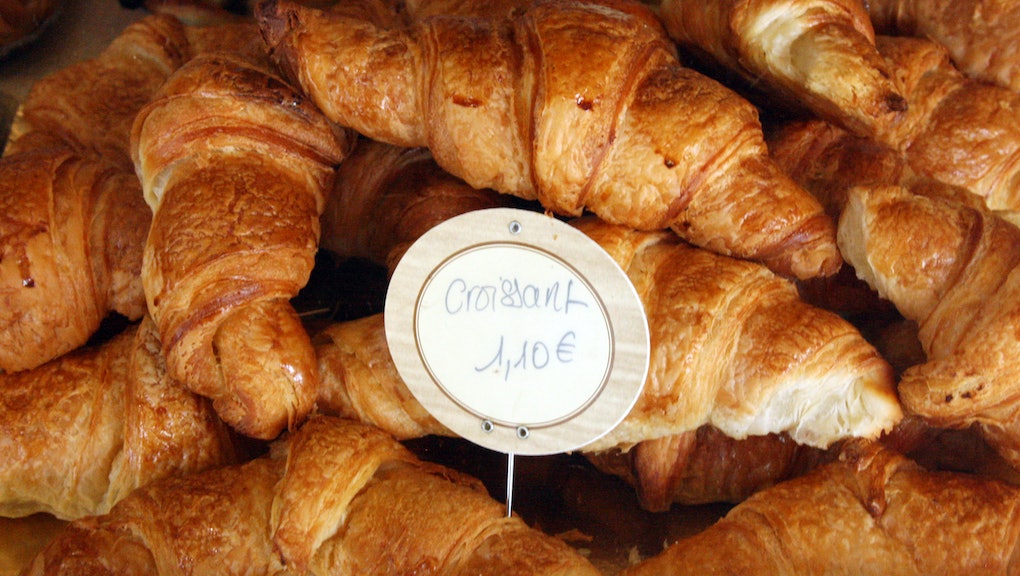 The science-backed reasons why croissants always taste better in Paris

I hadn't planned to make my first visit to Paris a comprehensive croissant research trip, it just happened. The catalyst was a croissant from Boulangerie Chevalier, a bakery in St. Germain that I stopped into immediately after checking in at my hotel in the sixth arrondissement — really just because the windows looked charming. Fresh off the plane, I was cloaked in eau de middle seat, yet the first bite was a transformative experience that cut through my same-clothes-different-day fog.

The pastry was simple, clean, crisp and soft, almost motherly in the way it nurtured my mouth. These buttery flakes that dissolved on my tongue gave me a sense of home. But I'd never once eaten a croissant in Paris before.

In the following two food-packed days, I consumed close to a dozen croissants, each one at least as good as the one before it. This grossly indulgent behavior was out of character for me: Before arriving in Paris, I'd eaten fewer than a dozen croissants in my lifetime.

After Paris, I crossed the border to Italy, where the magical quality of the croissant instantly plummeted. Yes, the first one I tried was in the Naples airport, but it was, by comparison, rotting garbage. The next and last croissant I ate outside of France was in Positano, a village on the Amalfi Coast known for its regional seafood and stellar pastas. The pastry crunched between my teeth like sand.

So what is it, exactly, that makes the croissant — which originated in Austria — so much better in Paris? I enlisted the help of several experts to confirm what I know in my gut is true: You'll never have a croissant as good as one you have in Paris

First, there's something about France.

It happens for the same reason your grandma's matzoh ball soup always tastes so comforting — it's your food memory working, a phenomena that is "a huge part of our eating experiences," Chef Jansen Chan, the director of pastry operations at the International Culinary Center in Manhattan, said in an interview.

This point may not be academic or tangible, Chan said, but it's felt. It's why I felt that sense of nostalgia in a city I'd never been to after taking just one bite of a pastry that cost a single euro.

Part of my experience had to do with context, John S. Allen, an anthropologist and the author of Home: How Habitat Made Us Human and The Omnivorous Mind: Our Evolving Relationship with Food said in an interview. Almost everything we taste and eat is "based on context," Allen said, meaning the people we're with and our surrounding environment all impact our impression of a particular food. An Eiffel Tower backdrop and gorgeous spring weather, for example, are likely to elevate the croissant-eating experience.

Croissant-making is a science, and the French have mastered it.

The French croissant is superior for another reason: Croissants are an integral part of France's historic food culture, so the bakers are in an environment where the bar is set high. "France is synonymous with croissant," Chan said. No, they didn't develop it, but Chan said the French "brought it to where it is today." God bless them.

While the ingredients for a croissant are simple — usually six, including flour, sugar, yeast, salt, butter and milk — the baking process is a complex craft that typically takes two to three days, according to Chan.

To understand how laborious croissant making can be, Chan walked me through the baking process. Croissant dough is "laminated," a delicate technique that alternates the folding of butter and dough to create layers. It's a precarious thing: The dough that encompasses the butter, called a "packet," must be rolled out, but you have to be mindful of the temperature and consistency of your ingredients so the butter spreads, but doesn't squirt out. The chefs at Chan's institution fold their croissant batches dozens of times to create upwards of 600 layers, allowing the dough to chill and rest at certain times in between in order to maintain the elasticity of the dough.

"There are certain parts of [pastry making] that are much more chemical- and physics-based," Chan said. "Pastry is more daunting to the average cook; it's more precise and you have to follow rules that work with the science."

Once the dough is rested and rolled thin, you cut it into a classic croissant shape, allowing the dough to sit some more so that the yeast can expand. Finally, when the croissants are ready to bake, the magic happens. Chan put it poetically:

When it bakes, the butter melts and creates steam because butter has a good percentage of water. The steam gets trapped in the individual layers and that causes the flakiness, tender layers. Butter is melting and the dough is absorbing that melting butter, attributing to the delicious flavor of the croissant.

Finally, it's all about the butter.

If you want good croissants, you need good butter. They've got that in France. "It's no secret that dairy in France and most of Europe is higher quality than most of the U.S.," Chan said, and while there are a number of artisanal North American farms stepping up their game, European-style butter, which tends to contain more butterfat, remains the best. So much so, Chan said, that he's worked at French restaurants stateside that imported butter from France, but for most, it's not really cost-efficient.

For Yann Ledoux, the executive head baker at internationally located French bakery Maison Kayser, importing butter is a necessity. Kayser bakeries funnel in a sheeted butter from Normandy that is 84% fat. "There's no trans fat, no margarine — it's pure butter," Ledoux said over the phone. Despite this crystal-clear praise of French quality, Ledoux would not explicitly agree that a croissant eaten in Paris is better than anything else. "I think it's a matter of how you do the croissant — I can find a good croissant here," he said, citing Épicerie Boulud as one that does it right.

But when I asked Ledoux about the opposing holistic experiences of eating a croissant in Paris versus New York, he got to talking. "Whenever I go back to France, one of the first things I do is go to a bakery and I get a croissant or I get bread," he said. Even the process of buying a pastry in France is different, he said — more intimate and real, where the salesperson knows the product in and out, because they're probably related to the person who baked it.

French bakeries breed an authenticity that can't be faked anywhere else. This is the je ne sais quoi that is folded into every single buttery layer of the croissant, making even a stranger feel welcomed and at home.