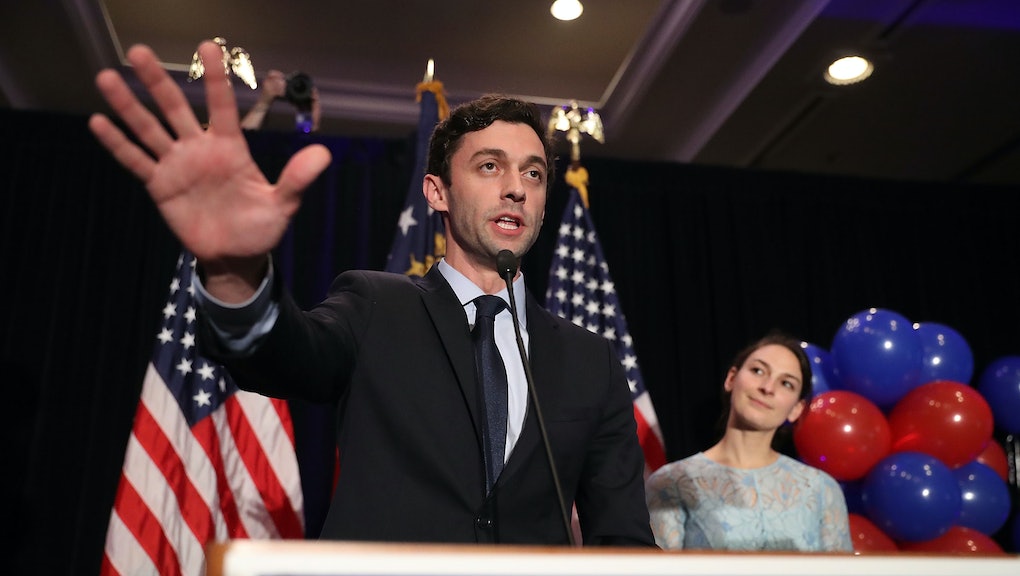 Democrats and progressives on Jon Ossoff's defeat: We "left it all on the field"

ATLANTA — The call came earlier than last time for the Jon Ossoff campaign: The Democrat failed to prevail in the special election for Georgia's 6th Congressional District. After the 30-year-old declared defeat, Democratic and progressive leaders said there was nothing more they could have done to beat out Karen Handel, the victorious Republican, in the traditionally conservative district.

With a historic commitment of money and people, Democrats and progressive groups drew the same percentage of the vote for Ossoff on Tuesday night that he attracted in the April primary.

In the campaign's final days, the Democratic National Committee sent 40 staffers and interns to Tuesday's special elections in Georgia and South Carolina, a party aide said. A majority of those party operatives went to Georgia, the aide noted, saying the support was "a significant amount" of staff members for the DNC to commit to a House race.

A progressive organizer in Georgia said the Democratic Congressional Campaign Committee, the party's campaign arm in the House, sent at least a dozen staffers to the Georgia race, including Steve Sisneros, a high-ranking DCCC official.

"As we look towards key races in 2017 and 2018, it’s clear that the enthusiasm for Democrats is growing across the country," said Sabrina Singh, the DNC's deputy communications director, in a statement. A DCCC spokesman did not immediately respond to a request for comment.

The DCCC alone spent $5 million backing Ossoff's House bid. Tuesday's failure is made more painful by the outpouring of support among local grassroots groups, some of which pointed fingers at the national party for failing to effectively support Ossoff.

Ossoff cited those groups in his concession speech. "It's not been about me. It's about you," Ossoff said, citing the more than 12,000 people who volunteered on his campaign. As he paused in his address to the crowd of supporters, a woman shouted: "Someone has to lead us!"

Isaac Bloom, the national organizing director for Indivisible, said in an interview that he was proud of the work done by grassroots groups he helped coordinate with. "Indivisible Georgia left it all on the field," Bloom said. "No matter what happened tonight, we are changing the map for 2018."

Adrienne Lever, campaign director for SwingLeft, canvassed for Ossoff and coordinated with her organization's 200 phone banks around the country to push Ossoff toward victory. Lever, who worked on Hillary Clinton's 2016 presidential bid, was optimistic going into the evening, but later said the Georgia 6th would always be "a very difficult race" for Democrats.

"The fact we had an opportunity to play here says a lot about the state of politics," Lever said. Her organization's 300,000 volunteers work to push Republican-held House districts toward Democrats. SwingLeft is currently targeting 63 districts nationwide, Lever said.

Of those districts, the Georgia 6th "was, by no means, the closest district and the most viable district for Democrats to win," Lever said.

August 9, 2017, 10:41 a.m.: This story has been updated to reflect the percentage share of the vote Ossoff won in the June election.