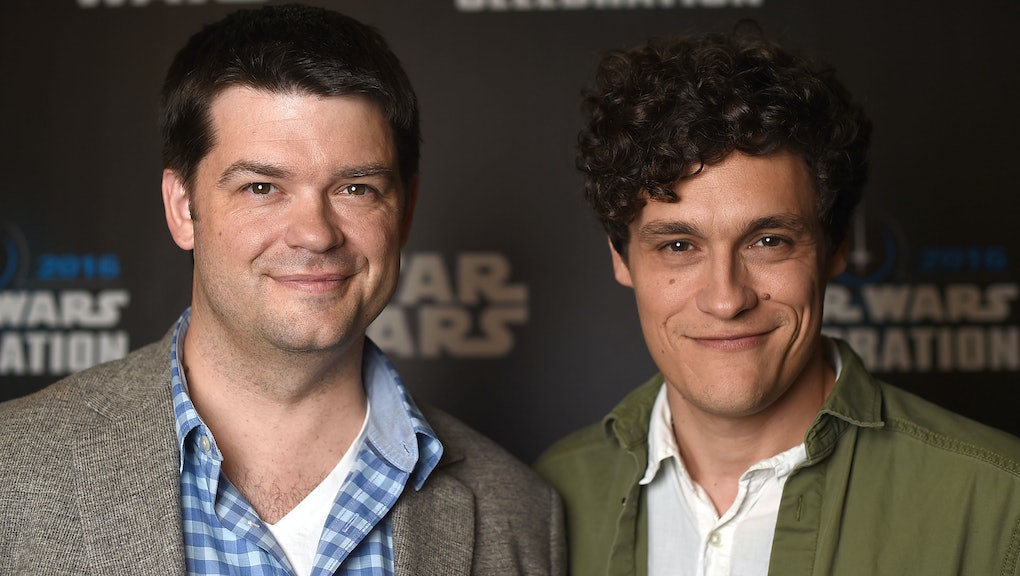 Is the Han Solo 'Star Wars' film in trouble after Phil Lord and Chris Miller's exit?

It seems that there has been some turmoil brewing in a galaxy far far away. In a shocking development, the Hollywood Reporter reported Tuesday that directors Phil Lord and Chris Miller have left the untitled Han Solo Star Wars anthology film over "creative differences." A few hours later, THR elaborated that the duo had actually been fired from the movie, with a source saying the directors were "blindsided" by the move.

News that Lord and Miller have been terminated from the film should rightfully cause fans to feel at least some unease, as production was well underway, with shooting taking place in London since February. With only several weeks of shooting left, Lucasfilm will now have to replace the directors and determine how much of what they have already done needs to be thrown out. This is obviously a much different scenario than a director leaving a movie prior to the start of filming — though even that can cause problems for a film that was already planned out.

Still, while this news on paper is no doubt disconcerting, Star Wars fans can hold off before they descend into too large a panic. In fact, while the scenario is not identical, the first Star Wars anthology film, Rogue One, faced similar late production issues prior to being finished. In that case, longtime Jason Bourne film series scribe Tony Gilroy was brought on board to write and oversee what has been described as "extensive reshoots." That film was hardly doomed.

The finished Rogue One turned out to be one of the best action films of the year, dazzling fans and critics, with some (albeit a minority) even calling it the best Star Wars movie of all time. The Felicity Jones-starring pic ended up riding an 85% on Rotten Tomatoes and made over $1 billion globally, putting to rest any concerns that may have been had. This, of course, does not mean that the Han Solo film will turn out just as well, but it does illustrate that producer Kathleen Kennedy and Lucasfilm have overcome hurdles in the past, and surely can do it again.

As of yet, it is unclear who will be brought in to finish the film, but Deadline reported that Academy Award winner Ron Howard is the top choice. This could be concerning to some Star Wars fans, as Howard's last two films, In the Heart of the Sea and Inferno, were hardly universally acclaimed — honestly, they were pretty bad. But if Lucasfilm is just looking for a steady hand to finish production on the film and help carry out a particular vision, Howard could very well be the right choice. And if one thing is clear, it is that there is a particular vision in place for the Han Solo film.

Sources tell the Hollywood Reporter that Lord and Miller's style immediately ran afoul of screenwriter Lawrence Kasdan's vision for the movie. Lord and Miller are known for their comedic work on films like 21 Jump Street, and apparently the directors' improvisational style did not work well with Kasdan's desire for shooting to strictly adhere to what was written on the page. And it is hard to argue with Kasdan's expectations for Han Solo, as the screenwriter was instrumental in the character's development in The Empire Strikes Back and Return of the Jedi.

What is unclear is why Lucasfilm would hire Lord and Miller in the first place if the plan were not to create a film with a larger comedic tone. That, though, may be a discussion best saved for another time. What should leave fans at least partially reassured that the Han Solo film is not going to run off the tracks is that there is such a definite vision in place. While filmmaker-driven movies will perhaps always be favored by fans, the Disney brands have a tremendous track record in place for creating critically and fan beloved films that adhere to the producer's larger vision. Just look at the Marvel Cinematic Universe.

There have been numerous indications of directors clashing with the higher ups at Marvel, yet every film that has been released has been rated fresh on Rotten Tomatoes, and has been generally well-received by fans as well. The comparisons, though, are not perfect, as Marvel has not had to deal with a director leaving a film at such a late stage in production, even if filmmakers like Patty Jenkins (in the case of Thor 2) and Edgar Wright (Ant-Man) have departed over creative differences before filming began. Still, Marvel's success illustrates that producer-driven films certainly can do well both critically and financially.

Whether the Han Solo film can survive this current hurdle all depends on what is already shot and how much needs to be changed. While this would be nobody's first choice, if Kennedy, Kasdan and whoever is brought on to finish the film realizes the movie is in trouble, perhaps they will not rush the film out in time for its May 25, 2018 release date.

For now, those that are finding themselves worried should just keep repeating the following two words: Rogue One.