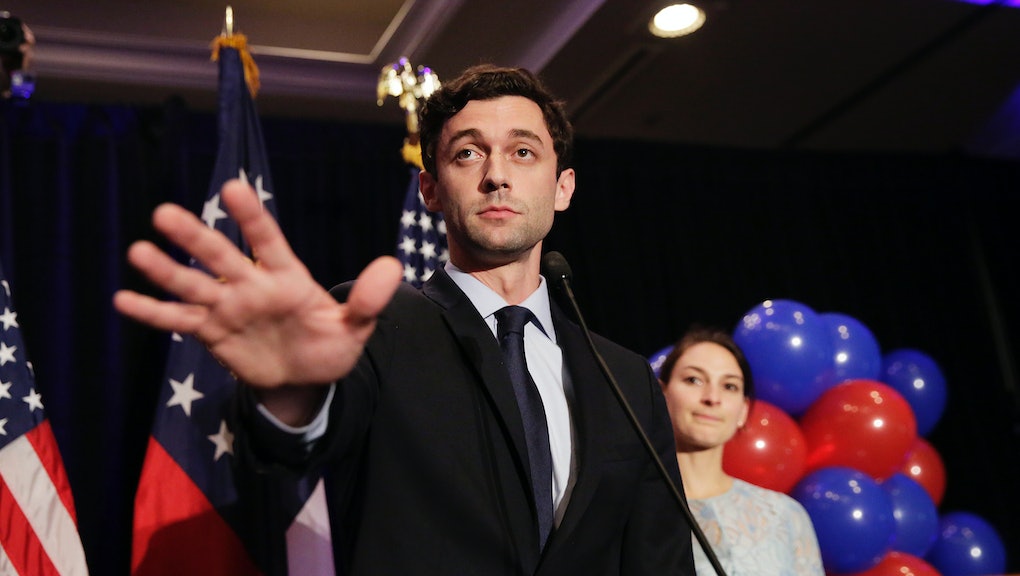 Jon Ossoff's loss is a blow. But for Georgia liberals, being so close is a hard-won victory.

For weeks — months, really — now, I’ve been listening to national news stories on what the outcome of the special election in Georgia’s 6th Congressional District to fill now-Secretary of Health and Human Services Tom Price’s seat would mean. Not just in terms of what would happen to Democratic newcomer Jon Ossoff and long-time Georgia politics player and Republican candidate Karen Handel, but whether what is now a loss for Ossoff would be a kind of shorthand for the death of the Democratic Party, or something equally hyperbolic.

But none of these ominous and heavy-handed predictions have ever felt particularly right to me. And I guess I’m as good a judge as any, since I was born and raised in Georgia’s 6th District and, after years in Boston, New York City and Georgia’s John Lewis-represented 5th District, I’m back in the 6th again. I understand, of course, that Ossoff’s loss on Tuesday night is a devastating blow to many, but within the district, the fact that this race was even close — so much so that it became a national news story — feels like a victory in its own right.

Because if you had told me when I graduated from high school 15 years ago that a liberal Democrat even stood a chance of winning a Congressional seat here, I would have laughed you straight out the door.

I graduated from George Walton Comprehensive High School in Marietta, Georgia, a public charter school with over 2,000 students and a reputation for being one of the most academically rigorous schools not only in the state but in the country. It was a school I was proud to go to, a school I am still proud to have gone to, and a place I will forever credit for giving me an incomparable education and foundation for adult life.

It’s also a place that had a school-run, school-sponsored beauty pageant (yes, really, a beauty pageant: There was no talent competition and girls were encouraged to participate so they could be assessed by a panel of local “celebrity” judges solely on the basis of their physical appearance), a school-sponsored Fellowship of Christian Athletes club (complete with faculty sponsor, school logo on the T-shirts and space for club photos in the yearbook) and where a teacher once told me that I was a “pinko Communist” when I said that I hoped that Hillary Clinton would run for president one day.

George Walton was a place where I regularly received physical hate mail — so much that the principal kindly started gathering it for me and would give me a weekly delivery — in response to my editorials as editor-in-chief of our high school newspaper calling out the newly elected Bush administration’s policy positions and my fears for reaching adulthood in a country seemingly being sold by Dick Cheney to Enron. (Ah, times were simpler then.)

The fact that it even was possible for Ossoff to have been a contender for this seat feels like nothing sort of a miracle, and a true testament to the changing heart of a place that I have seen national reporters try and struggle to truly represent.

Because here’s the other thing about my high school: It was also a place where I had numerous friends, both male and female, who were out as gay and, seemingly, comfortably and safely so. It was a place where I had friends who were first-generation American, whose families had come from Russia, Pakistan, India and countless other places all to this little corner of suburban Atlanta to give their children a shot at a first-in-class public education. It was a place where I had teachers who loved my classmates and I like we were their own children, who participated in ridiculous and hilarious pranks on fellow faculty members and students alike. (Think filling a new teacher’s classroom with bricks of stinky cheese or daring a new teacher to show up in a bunny suit to read rhyming couplets on Valentine’s Day in the classroom of another.) It was, in short, a place I learned to think — but I also learned to care.

So it’s also not remarkable to me that women and young people turned out in droves to organize and make it known that they were ready for a change — and weren’t going to sit back and accept a candidate who said she was against a "livable wage" and was out trying to defund Planned Parenthood before it was even the “it” Republican thing to do.

This was a race that, in theory, shouldn’t have even been close. A Congressional seat held by Republicans for over two decades — it was once Newt Gingrich’s House seat, no less! — in a district that voted for Trump (albeit narrowly) should have made for an anything-but-interesting race. Instead, what we got was the most expensive Congressional race in history — the results of which do not reflect a boisterous reinforcement of the Trump ideology, but instead speak to a community that refuses to sit silent when they see things with which they fundamentally disagree.

Because, Trump tweets and all, this race wasn’t so much about Karen Handel as a proxy for Trump: Locally, it felt more like a story about Karen Handel as the enemy of Planned Parenthood and its patients, many of whom are the very people Handel said earlier this month do not deserve to earn a “livable wage.”

It was only five years ago that Handel, during her stint at the breast cancer charity Susan G. Komen, recommended to the board that the group stop providing grants for cancer screenings to Planned Parenthood, which it then did. Fall-out ensued, ending in Handel’s resignation.

So to see Handel enter in a painfully tight race against a pro-choice, young, male Democratic challenger with a medical student fiancée and an outpouring of support from Planned Parenthood Southeast doesn’t feel to me like a loss for reproductive rights, but a sign that voters have longer memories than they are often given credit for. That enough people were against what Karen Handel did while at Komen to make this race a close one is a more interesting — and I believe more accurate — story than any analysis that seeks to pin an overwhelming vote of confidence for the Trump administration from the 6th District.

After all, my high school was also a place where I regularly walked through throngs of anti-choice protesters to get to the school’s front doors. Banners with pictures of bloody fetuses adorned the front parking lot; fetus dolls were thrown at us as we tried to make it through the seemingly random protests to our AP classes and club meetings. That 15 years later an anti-choice Republican with a strong record opposing Planned Parenthood was in a close heat against a pro-choice Democrat is nothing short of stunning.

Over the past few months, I spoke to canvassers for Jon Ossoff who showed up, nearly daily, at my front door. I have spotted countless Ossoff signs in front yards and only once saw one graffitied — and even then, it was only altered to read “Jon Ossoff...IS A DORK.” I saw women wearing #FlipTheSixth and #VoteYourOssoff buttons at the library and the grocery store and, yes, even at Panera.

Did Jon Ossoff lose? Yes. But here from the 6th, it’s hard to read his failure to defeat a candidate who should have been a shoo-in as simply a loss.