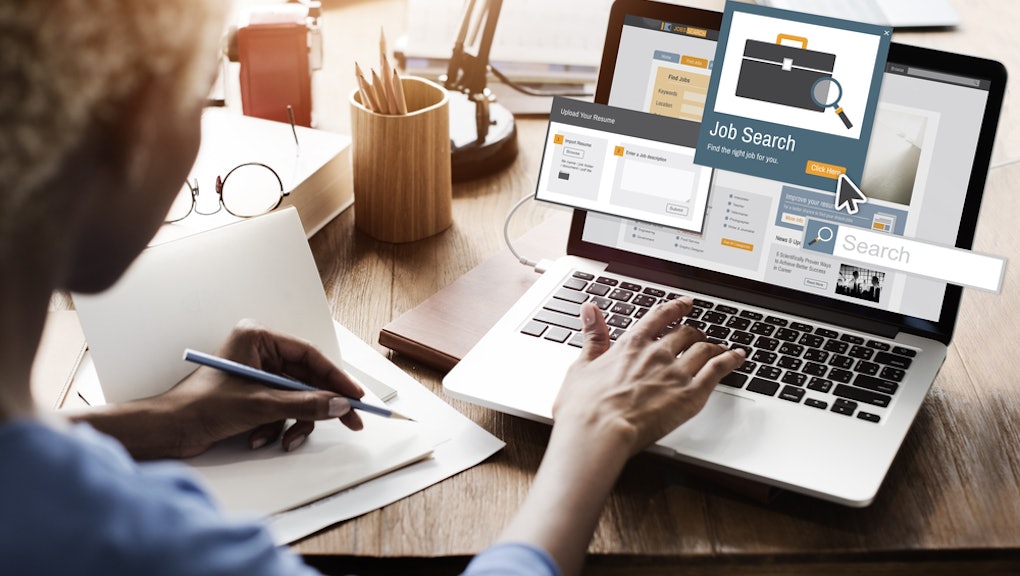 Career mistakes to avoid: These 7 unconscious bad habits are ruining your job search

In the market for a new job? With hiring on the rise and the jobless rate at the lowest point in ten years, now is an ideal time to snag a new gig. But maybe you are not sure exactly where to start.

Sure, it can help to reach out to your network of friends, professional colleagues and acquaintances: In a new LinkedIn survey of 15,905 LinkedIn members, 70% of people said they were hired at a company where they had connections and 35% said a casual conversation led to a career opportunity.

But there's just one problem: Most people wait until they're in a job crisis to reach out, and that can be counterproductive. "Often times, people only kick networking into high gear when they’re in panic mode — when they think they’re going to lose their job soon, when they’ve reached the breaking point of their toxic boss and/or employer or when they’re beyond bored and need a new challenge," Vicki Salemi, a career expert for Monster said in an email. That can be off-putting to the person you're contacting, who might sense your desperation, especially if you don't normally reach out.

As for the main reason people don't keep up with their contacts? Not enough hours in the day: Of the 38% of the LinkedIn survey respondents who said they had a hard time keeping in touch with their network, nearly half blamed a lack of time. Complacency was another problem — with only 48% networking when things were going well in their career (aka the best time to stay connected).

Of course, networking mistakes are just some among many other unconscious errors that will hurt a job hunt. Here are the biggest common mistakes to avoid.

1. Only networking when between jobs

Again, if you're not networking on an ongoing basis, you're missing the chance to build relationships. You may have opted out of networking altogether because the thought of going to formal events and whipping out your elevator pitch feels overwhelming. But there are other, less stressful — and less time-consuming — ways to grow your network.

Strike up a casual conversation at a community event or the gym. Network at work. "Get to know people in other functions so you have visibility into new roles or opportunities to add a new skill," Paul Wolfe, senior vice president and head of HR for Indeed, said in an email interview.

Worried about what to say? You're not alone. Networking doesn't come naturally to most people, Wolfe noted. But with practice, it can start to feel more natural. His advice: "Come prepared with some open-ended questions."

That means you need to keep ongoing contact. Ping your contacts with fun reminders from conversations every few weeks. It doesn't have to be all about work either. Talk about a vacation or a new restaurant that opened up that they might be interested in. The important thing is to stay connected — and not be the one to suddenly disappear mid-conversation, or leave a message unanswered for months.

3. Staying in your box

Do you always visit the same job boards and apply for same kind of positions? You could be missing out. "Your next career opportunity may be something that wasn’t previously on your radar screen but sounds like a fit for your interests and strengths," Salemi advised.

Just replying to job postings often means your resume is missed, as these postings attract the most competition, Laura Smith-Proulx, a certified career management coach and certified resume writer at An Expert Resume said via email. "Look online for companies that interest you, either because of the industry, location or product, and craft a pitch to them," she advised. "Describe why you’d be an ideal employee and what motivates you to work there. These efforts will yield better results than applying to job postings alongside the masses."

Persistence is key to finding a job, which means following up. If you send a resume to a job posting on a company website, it's wise to follow up with a direct email to the hiring manager as well. That's because many companies use automated systems that filter resumes by keywords. "If you’re not a close enough match, your resume might not make the cut," Smith-Proulx notes.

And don't forget to follow up after networking events. "Send emails to your contacts, thank everyone you spoke with and complete any promised tasks," Wolfe advises.

5. Not doing due diligence

Make sure the company you're applying to is one you really want to work for — and look out for red flags (like grousing by the hiring manager) during the interview process.

Research the firm online to learn about its reputation, through company reviews on sites like Glassdoor or by checking LinkedIn to see if people who have worked there tend to stay long. Don't forget to look at news stories for recent reports of controversies or layoffs. Then follow up in your interview to clarify anything that concerns you.

Ask anyone you know who has worked there about their experience and whether they'd recommend the company. "If you’re networking and speaking to someone in a detailed conversation, you may think to yourself, 'wow, their company culture is horrible!' That information is powerful and saved you the possibility of working for a toxic employer," Salemi said.

6. Sticking with a lackluster pitch

Now it is your turn: Your job is to sell yourself, so you'll need a great elevator pitch, an awesome resume and kick-butt interview skills.

Don't sell yourself short. "If you’re popping some information into a resume template and calling it a day, you'll soon find that either the wrong people respond to you — because you’re underselling yourself — or that the right companies are ignoring you for the same reason," Smith-Proulx warned.

Time to up your game. To land a job, you need to be able to answer how you will add value and what you can do that others can't. That's usually a combination of quantifiable accomplishments ("I boosted sales 25% in 2016") and softer skills, like fitting into the company culture, being a great manager and working well with others.

Finally: Networking can't just be about what others can do for you. Make sure you're a valuable contact others want in their rolodex, because you help bring great people together. "Many people forget that networking is a two way street," Wolfe said.

Try to offer your contacts something that is helpful to them as well. "Maybe they’re looking for a connection. And if they aren’t, open the door and tell them if there’s anything they need, you’d be happy to help," Salemi advised. Even if they never take you up on the offer, the fact that you made the gesture won't go unnoticed.