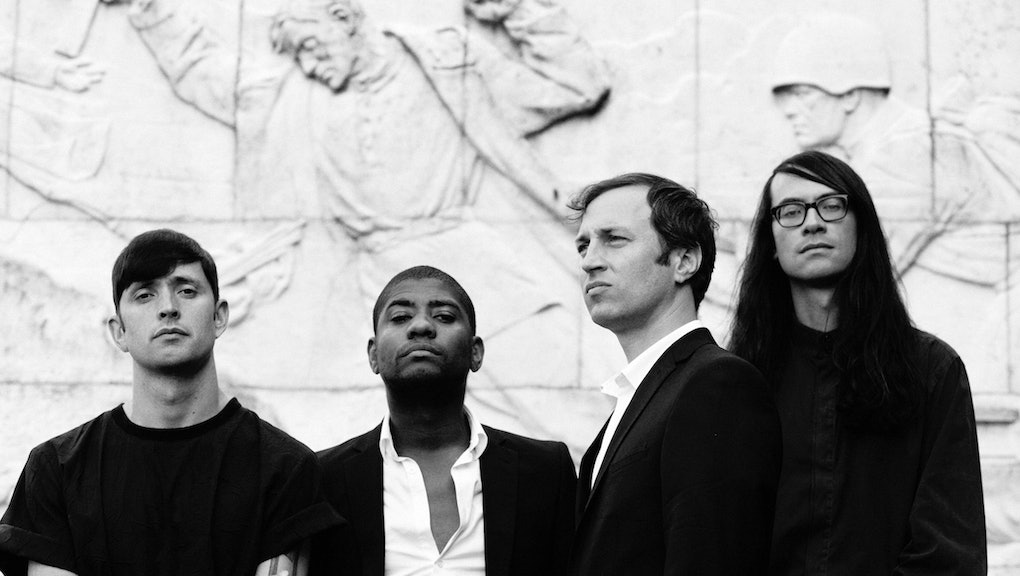 Algiers' 'The Underside of Power' is a soundtrack for every revolution — past, present and future

For the past year and a half, Algiers has been trying to answer a difficult question: What is the role of politically conscious musicians in the age of Donald Trump?

"For me, when Trump got elected, it was very difficult to think about our music and think about critique," Ryan Mahan, bassist for the Atlanta-founded experimental rock outfit, said in an April interview in a Brooklyn restaurant. "How the fuck, as a thinking person, do you even engage in a critique of Donald fucking Trump? He's so absurd that it makes it actually difficult to find a place to attack."

The answer they've come up with — as heard on their recently released sophomore album, The Underside of Power — involves meeting the enemy on their home turf. "When you're dealing with something absurd, you have to match the absurdity," lead singer Franklin Fisher said.

"It can be base and crude as that — it's important still," he said. "It's a mix. If you mix that direct attack that people can rally behind, but you also have content with it — I think that's an interesting approach."

The record, released Friday via Matador Records, never approaches anything as crass as that sentiment in its 12 tracks. Trump's name never appears in the lyrics, nor does any mention of Brexit, though the two events bookended the album's recording, and no doubt influenced Algiers' creative process. It's more of a feeling that they're exploring, a sense of political catastrophe — one that's delivered via a chaotic and thought-provoking tour through the history of revolutionary music.

Musically, Algiers' sound is essentially unprecedented. Assembled by frontman Fisher, bassist Mahan, guitarist Lee Tesche and new drummer Matt Tong (formerly of Bloc Party), The Underside of Power is a grinding amalgam of mechanized, industrial rhythms, rapid-fire footwork, defiant '90s hip-hop, punk guitars and horror-film ambiance. It creates a haunted, swampy soundscape for Fisher to charge through with his breaker-of-chains gospel vocals. The lyrics read like literature: "Reduce our memories to silence," Fisher sings on "Cry of the Martyrs." "We're passing all the stories of the unsung and unseen/ Listen to the martyrs cry for me."

It deepens the work of their 2015 self-titled debut record, which aimed for a similarly jarring mixture, but did less to blend the contrasting influences. Production support from Adrian Utley of Portishead and Randall Dunn of Sunn 0))) helps smooth some of the visible seams, and the addition of Tong's drumming provides a unifying backbone. Every genre referenced on the record, like every historical figure who gets a nod — and there are several — is deliberate. When the band folds a texture into their collage, they look to bring its entire history with it. The context is essential and inseparable from the music itself.

That logic is part of what it makes it feel surprisingly organic when the soul-clapping rock swagger of the album's anthemic title track rises and eventually recedes into droning, Alan Vega-style noise. That thinking also explains the band's decision to chop up Rev. James Cleveland's 1962 gospel song "Peace Be Still" on "Cleveland," laying it over a bed of jagged synths to recite the names of Sandra Bland, Alfred Wright and Keith Warren — black people who died under mysterious circumstances over the past few decades, in ways that Franklin feels point indirectly to corruption within the American system.

The title track is specifically intended to give the listener pause, inviting them to consider the phrase that gives the song and the album its name. "The underside of power" comes from a quote Fisher heard once but still can't figure out the origin of.

"It was probably from something really stupid," Fisher said. "But the way I interpreted it is, somebody said that you don't know what real power is until you're on the wrong side of it. And at that point you're completely subject to whatever that person, whatever that institution wants to impose upon you."

Fisher elaborated further, drawing out an extended metaphor of the powerful, represented by a boot stomping down repeatedly on a seemingly helpless insect. "The insect is everybody that's the disenfranchised and the downtrodden minorities, and trying to fight up against something," he said. "But there's also the hope that maybe there's a vulnerability underneath that foot, and if you're a snake or something you could, like, bite the foot and you might be able to gain some sort of victory."

As dark as the record is from start to finish, the band designed it as a way to communicate a certain kind of hope. The opening track, "Walk Like a Panther," begins with a sample of a speech from late Black Panther chairman Fred Hampton — a speech that the band says Jay Z tried to sample on one of his own albums, before being denied by Hampton's estate. It's difficult to decipher through the static, but Mahan recites the words: "When I leave, when I'm killed, you must remember the last words on my lips was, 'I am a revolutionary.'"

The band earned that sound bite by writing a letter to Hampton's son, detailing how much his father's revolutionary work had inspired them politically and artistically. They describe Hampton's Black Panther movement as a "revolution of the people," a far cry from the Black equivalent of the KKK that conservative pundits and public figures have attempted to reduce it to throughout history. Algiers got permission, and, according to the band members, it sets the tone for the entire record.

"Frank and I had so many discussions about what the record could represent on a thematic level," Mahan recalled. "And we all wanted it to represent some sort of hopeful stance, without being naive. Starting a record with that is assertive. It's saying, 'This is what we are, this is what we believe in and we're going to continue to believe it, no matter how vile society is.'"