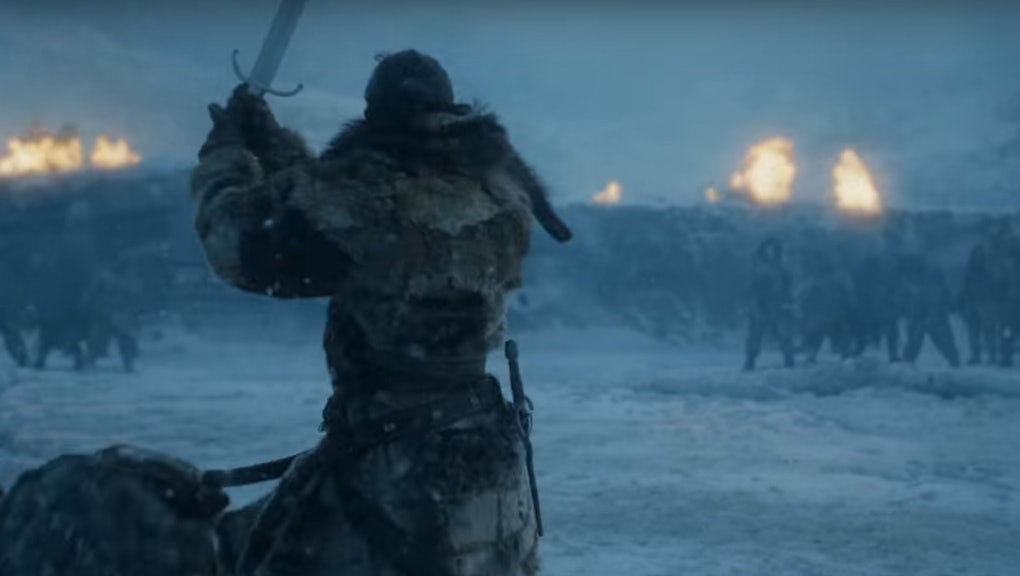 HBO just dropped a second trailer for the highly anticipated seventh season of Game of Thrones and it's freaking awesome.

Not that this should come as a surprise to anyone, but season seven is beginning to look like the most action packed yet, and this new trailer features battles that appear to be taking place all over the Seven Kingdoms.

Check out the trailer below and then keep reading for a full breakdown:

While previous footage has highlighted the impending clashes between the various Stark, Lannister and Targaryen armies, this second trailer goes further and reminds viewers that the real danger lies in the North. Remember, winter is finally here, and so are the White Walkers, which means all other quarrels may eventually take a back seat — well, after a good bit of fighting first.

After being absent in the first crop of footage, the Night King and his cold-hearted army are on full display in this second trailer, and from Jon Snow's voice over, it sounds like it may take a reluctant alliance to take them down. The interesting question is whether that alliance will include the Lannisters, or if it will just be between the Starks and Targaryens, which is hinted at in the trailer.

Recently released images have confirmed that Beric Dondarrion, the leader of the Brotherhood Without Banners, will indeed play a role in season seven. What role that would be is not entirely certain, but he does make a fiery appearance in this second trailer, suggesting he is ready to fight.

Since it looks like Beric is somewhere in the North, it is very likely that he may at some point join Jon Snow in the battle against the White Walkers. Other theories have suggested that he may eventually team up with the Hound to take down the Mountain, but with the White Walkers getting ready to attack, that familial feud may have to wait.

It was a long time coming, but Arya finally decided that she was heading home at the end of season six. Recently released images have teased that she will eventually reunite with Sansa and Jon Snow at some point, but it is not exactly clear when. We only get a few quick shots of Arya in this new trailer, but her eyes make it seem like she has arrived at an intended destination. Could it be home?

Will there be a sneak attack?

There is a theory going around that Daenerys will take full advantage of Tyrion during an attack on Casterly Rock. As one of three remaining Lannister children (maybe), Tyrion has intimate knowledge of Casterly Rock, including its sewer and draining systems.

While it is not 100% clear that this is Casterly Rock in the above image, it does seem that Grey Worm is leading, presumably a small army, through a tiny opening in a mountain. It could be that this is a hidden entrance into Casterly Rock and that Tyrion pointed this out to Daenerys' army.

Later on in the trailer, it looks like a few Unsullied open the castle doors for the rest of a larger army.

Who is with Bran?

Last we saw Bran, he had to flee the original Three-Eyed Raven's lair after it was attacked by White Walkers. Eventually, he made it into the company of his long thought dead uncle, Benjen Stark, who brought him and Meera to a Weirwood north of the Wall.

In the trailer, it seems that Bran, who is now the Three-Eyed Raven, is accompanied by a new man, but it is not clear who. It certainly does not appear to be Benjen, meaning we could be meeting a new character. The only major new character that has been announced is Jim Broadbent's archmaester, who will apparently predominately appear alongside Samwell.

Since we know Bran can see images from the past, including the dead, it could really end up being anyone standing alongside him.

While it is hard to imagine anyone being more sinister than Ramsey Bolton, recent comments from actor Pilou Asbæk suggest that Euron Grejoy could make the deceased sadist look like a "little kid."

When we last saw Euron, he had claimed the Salt Throne, and had vowed to rebuild his fleet after Theon and Yara fled with some of the island's best ships. Yara and Theon ended up joining Danaerys' fleet, which already included the Tyrell's ships and those from Dorne.

In season seven, it looks as if Euron Greyjoy has kept his word to rebuild his ships, as the trailer shows a very large fleet all flying the Greyjoy banner.

Though he only has one hand, it looks like the battles in season seven will be so hard fought that Jaime Lannister will be a full participant. The trailer gives viewers two really good looks at the Kingslayer; one seemingly preparing for battle, and one fully engaged in what appears to be a devastating conflict. There will surely be plenty of those.