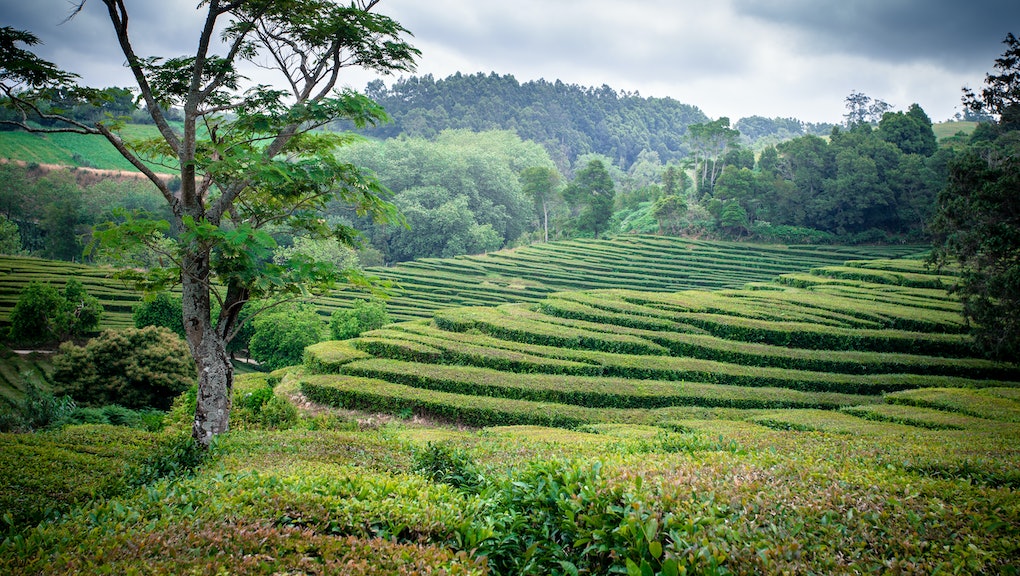 How Chinese tea arrived — and flourished — on an island in Portugal

Nothing in the Azores happens by accident. Stuck halfway in the middle of the Atlantic Ocean, it takes careful knowledge of the islands (or a really good tour guide) to book a trip here. Portugal claimed the territory in the 1400s, though there's evidence that both Britain and Spain had already sailed by, ultimately deciding the archipelago was unfit for further exploration.

What a mistake that was.

Formed out of volcanoes, the Azores are remote but by no means barren. There are lakes, waterfalls, plunging valleys carpeted in green; lots of things grow here. Europe gets milk and cheese from its plentiful cows. There are several pineapple plantations (mostly for tourism purposes). Wine from the volcanic vineyards of Pico island can rival any Douro Branco from the mainland. Then there's the seafood: lobster, barnacles, grouper — to name a few specialties.

But one standout crop in particular has found an unlikely home in the Azores: tea.

Though it originated in China in the third millennium B.C., tea has been sought after around the globe. The English adore tea, and the beverage is a mark of sophistication in high-end Parisian hotels. But outside of the Azores (and one spot in Cornwall), you’d have a hard time finding other European farms that grow it. Tea tends to thrive in tropical, high-altitude places that receive a ton of sunlight, and the Azores has just the right conditions.

How the plant ended up here is another story.

Back in the 1800s, when agriculture shaped the Azores, the wealthiest families on the island of São Miguel grew and exported oranges. You could see orchards all over the island — locals even referred to the manors as "the orange houses." Then, a blight: By 1864, the orange trees had all been wiped out.

The farmers were desperate, but they weren't about to replace it with just any old crop. As a mid-Atlantic archipelago, the Azores had become a regular stopover for traders en route from Africa and Southeast Asia. As a result, locals had worked up a taste for all the exotic foods, spices and textiles they'd been exposed to.

Tea was among their favorites. So, in 1860, a farmer named José do Canto had a bunch of seeds shipped over from Japan and India. Once planted, however, the farmers realized they had no idea how to actually grow the stuff, let alone steward the delicate process that turns bush into brew.

Enter Lau-a-Teng, who by now has achieved a kind of mythical status on São Miguel. One of the earliest Chinese tea masters hired to teach Europeans how to farm tea on their own soil, he cuts a bold figure in history. In photographs, he appears cloaked, with a high oval face and mournful eyes.

Teng, it turns out, was a bit of a doper. The story goes that he was paid in both cash and opium for his services, though the value of the impact he had on São Miguel’s agricultural landscape far exceeded both.

Teng arrived in 1878, along with a handful of other Chinese workers attributed with jump-starting Sao Miguel’s tea enterprise. By the early 20th century, 10 separate factories and almost 50 tea plantations were thriving on the tiny island. If this seems far-fetched, keep in mind that entire economies are built around the cultivation and export of tea in other parts of the world. It's a testament not just to Teng’s artisanal skills as a tea master, but also the sheer drive of Azoreans that their plan actually succeeded.

No one is more familiar with the struggles of running a successful tea operation in the middle of the Atlantic than Madalena Mota, who owns Cha Gorreana, the oldest remaining Azorean tea estate on São Miguel. Inside the factory, which has become a novelty attraction for tourists to the island, huge, rumbling machines — one each to roll, steam, dry, separate, and pack the leaves — require constant upkeep.

For anyone (like me) who makes a daily ritual out of hot water, dried leaves and a porcelain cup, the process is mesmerizing. In one machine, a giant spool of rough, semi-transparent paper is fed through a tube and then snipped into small squares, forming individual tea bags. Upstairs, Mota showed me through a stiflingly hot attic where rows of the fresh-picked, sweating leaves release an intoxicating, grassy perfume.

Restaurant menus all over the Azores feature Cha Gorreana, including a delightful spot down the road from the factory, where tea is actually brewed with scalding thermal water that bubbles up fresh from underground. (Remember: these are volcanic islands.) Once the iron-rich water makes contact with the green tea, a chemical reaction turns the solution bright lilac (the taste is mineral-y, but refreshing.) The town, Furnas, has since gained a reputation as the home of “purple tea.”

You can also try Cha Gorreana tea inside the factory's tasting room. Not only is it a cozy place to enjoy a cup, but the whole visit is free. (Cha Gorreana refuses to charge an admission fee — and after the tour, which is self-guided, complimentary tea is offered.)

There's a small bar selling liquor and snacks plus some homemade gelato in passion fruit, pineapple and vanilla bean flavors. The mellow tea also pairs well with "queijada," a small, tulip-shaped tart with a caramelized egg and sugar paste filling. Think of it like espresso with biscotti, only more floral.

Pull up a table by the window, where you can look out at the rolling green fields, brimming with hundreds of thousands of leaves yet to be harvested, that stretch all the way to the coast. It's a view that's nearly impossible to find anywhere else in Europe.