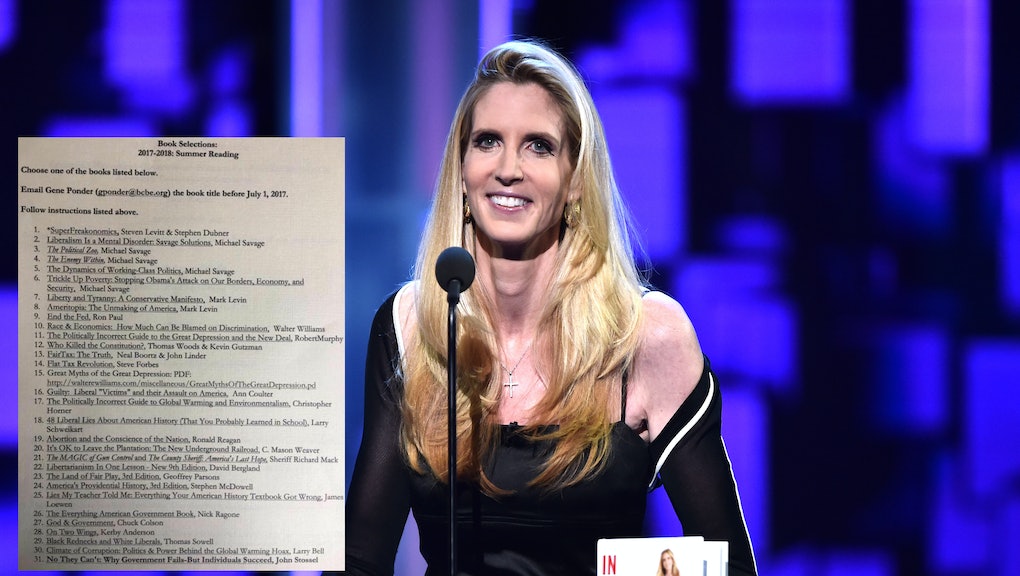 Required reading lists are the bane of any high-schooler's summer. Now, they're also a new frontier for politicizing teens in favor of right-wing politics.

An alleged list of required summer reading at an Alabama public school surfaced online Wednesday, compelling students to read at least one book from a list of works by conservative pundits like Ann Coulter, Michael Savage and Mark Levin, as well as a book about abortion by Ronald Reagan. The list was allegedly assigned by Gene Ponder, who teaches government, economics and AP-level political science courses at Spanish Fort High School in Alabama.

Among the assigned books are titles like Liberalism Is a Mental Disorder: Savage Solutions; It's OK to Leave the Plantation; Guilty: Liberal "Victims" and their Assault on America; The Enemy Within: Saving America from the Liberal Assault on Our Churches, Schools and Military; and Liberty and Tyranny: A Conservative Manifesto.

The list appeared online via journalist Eoin Higgins, who obtained it from out-of-state students who were passing it around.

Of the 31 books listed, only a small handful — Lies My Teacher Told Me and The Everything American Government Book, for example — were not explicitly written by right-wing media pundits.

Gene Ponder isn't just a public school teacher, but a former candidate for lieutenant governor of Alabama who lost the Republican primary. During his campaign, he cited the power of the federal government to enforce its laws on noncomplying states — the very means by which battles like school segregation and marriage equality were won — as his reason for running.

Ponder told AL.com that this kind of law enforcement is tantamount to "coercion, intimidation and blackmail."

In an email statement to Mic, Baldwin County Alabama Public Schools communications director Terry Wilhite wrote, "Mr. Ponder’s reading list that’s going around on social media has not been endorsed by the school or the school system."

"The list has been removed by the teacher," he added. "Baldwin County Public Schools has a process to vet and approve reading lists so that a variety of sources are used. I expect all employees to follow our processes, procedures and policies."