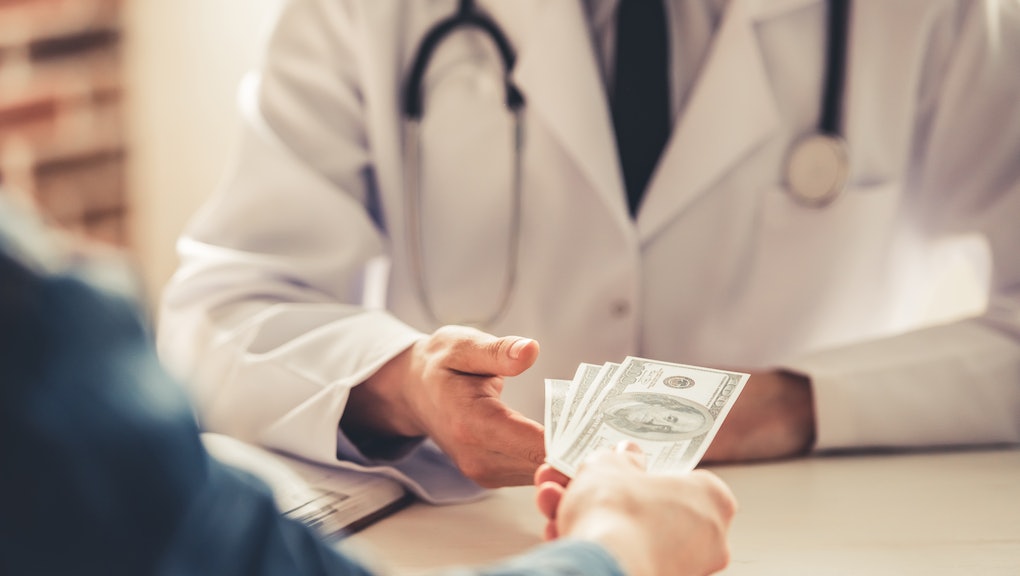 Senate health care bill: Why it raises insurance costs, how much you pay for deductibles and more

The Senate version of the House's American Health Care Act was released to the public Thursday. Despite some reports that the Senate GOP bill is more "moderate" than the version introduced by the House, that's not so clear when you examine how the legislation could change quality and prices of health care and insurance for all Americans.

Senators are expected to vote on the controversial measure — dubbed the "Better Care Reconciliation Act of 2017" — by the end of next week, per the Washington Post; it will then be sent back to the House, before proceeding to President Donald Trump's desk.

On one hand, some popular aspects of former President Barack Obama's Affordable Care Act remain in place — like young people will be able to stay on parents' health care plans until age 26. But, importantly, several parts of the bill could still push total annual costs up for most Americans and lower the overall quality of insurance, by allowing for plans that cover fewer health problems.

For many, subsidies that previously helped offset plan premiums — the annual cost you pay for insurance — will get less generous, while the amount you must pay out of pocket before insurance kicks in, deductibles, could go up.

As the Center for American Progress' Topher Spiro notes, the Senate bill cuts down the median amount of money people save from more than 70% of costs to 58% — which means the average deductible for families on silver plans could increase from about $7,400 a year to more than $10,400, and typical people could see out-of-pocket costs increase overall.

The Senate GOP bill also expands the use of 1332 waivers — which could allow states to pare back ACA protections, like coverage of essential health benefits and prescription drugs, maximum out-of-pocket limits, and tax credits and subsidies, as the Washington Post reports. (So even if premiums go down on average, they could be offset by overall costs.)

For these reasons and others, it might be misleading to call the Senate GOP bill more moderate — in terms of financial and health effects on Americans — than the House version, the left-leaning Center on Budget and Policy Priorities pointed out in a tweet.

Women's health coverage will also likely shrink: Essential health benefits (like preventative cervical cancer screening) could be rolled back in certain states, because of the 1332 waivers — and new financial disincentives would "strongly" discourage major health insurers from covering procedures like abortions, said Laurie Sobel, associate director of women’s health policy for the Kaiser Family Foundation. And as Kaiser Family Foundation's Alina Salganicoff noted on Twitter: The bill would defund Planned Parenthood, which provides millions of people with free health care beyond reproductive services.

Another group the Senate bill could affect? Workers at small companies. The bill eliminates the ACA's employer mandate, which requires employers with at least 50 employees to provide health insurance. (Workers at larger companies could also lose protections, like caps on out-of-pocket costs, even if their employer keeps providing insurance.)

Crucially, the new bill also removes Obamacare's individual mandate, which has encouraged young and healthy people to buy insurance — or face a penalty. If fewer healthy people decide to sign up, eliminating the mandate could actually increase premiums, or could even make it more likely the whole market will "collapse," Massachusetts Institute of Technology economist Jonathan Gruber has written in Fortune.

That is because if more sick and elderly people with expensive health care needs buy insurance than healthy people, costs might need to rise across the board. Then again, for the same reason the bill could instead lower average premiums — that older, sicker people might simply leave the market because they can't afford insurance, improving the risk pool — people losing coverage could offset the destabilizing effects of axing the mandate.

Still, adding to concerns about market stability, Kaiser foundation's Larry Levitt noted the amount of funding allocated to keep markets stable appears to be lower than the House's version of the bill — and it's unclear what will happen to those funds after 2026.

The Senate bill would keep in place many subsidies that help low-income people afford health insurance, but the definition of "low income" is shifting: Under the current system, a family making up to 400% of the poverty level could qualify for subsidies, a figure that under the Senate version would be reduced to 350%. You might be surprised by who counts in that bucket.

In dollar terms, under Obamacare, an individual making up to $48,240 could qualify for at least some subsidies to help cover the cost of insurance, according to the poverty guidelines put forth by the U.S. Department of Health and Human Services.

But under the new bill, that figure will now be reduced to roughly $42,210 — so someone earning about $45,000 would suddenly be out of luck, and could even get stuck could end up having to pay the full cost of their medical expenses. (Those in Alaska and Hawaii would be affected at higher incomes.)

"If you’re one of those folks, it means a lot to lose your subsidy," said Sabrina Corlette, a Research Professor at the Center on Health Insurance Reforms at Georgetown.

Losing subsidies would be particularly difficult for older enrollees, noted Spiro, of the left-leaning Center for American Progress: Those that are below the threshold could still end up seeing their health care cost caps go from between 6% and 9.5% of their income to as high as 16.2%.

Finally, some of the sharpest criticism against the Senate bill has been over its cuts to Medicaid, limited by caps based on a state's population or doled out in block grants, if the states choose them. Cuts to Medicaid would continue to get steeper over time, trapping vulnerable Americans. As recently as 2014, 40% of Americans had debt from medical expenses, the Atlantic reported.

The bill would also block pregnant women from receiving Medicaid expansion benefits, as the journalist Nish Weiseth noted — and could affect 60% of kids with disabilities and nearly half of all people giving birth in the United States, according to Margot Sanger-Katz of the New York Times.

Senate Majority Whip John Cornyn (R-Texas) told Talking Points Memo a Congressional Budget Office score of the bill could come as soon as Friday. Republicans plan to vote next week, before the Senate moves to recess for a week on June 30.