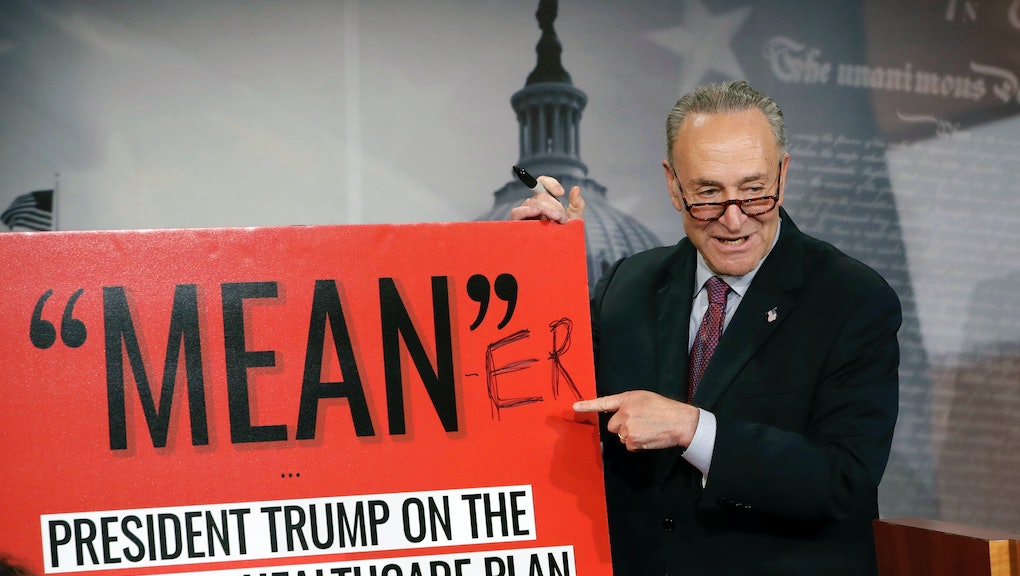 Senate Democrats are working to stall what they described as the "heartless" health care reform bill released by Senate Republicans on Thursday morning.

"This bill will result in higher costs, less care and millions of Americans will lose their health insurance, particularly through Medicaid," Senate Minority Leader Chuck Schumer of New York said. "The way this bill cuts health care is heartless."

The bill, drafted behind closed doors by Senate Republicans, would axe the individual and employer mandate established by the Affordable Care Act, effectively cut federal funding to Medicaid and allow insurers to charge older Americans more for their health insurance. It would also eliminate federal funding of Planned Parenthood for a year and allow states to decide what constitutes an "essential health benefit."

Democrats immediately began working to slow down the proceedings to keep the bill from getting the quick vote Senate Majority Leader Mitch McConnell wants on it; the Kentucky Republican is hoping for a Congressional Budget Office score on the American Health Care Act by Tuesday and a Senate vote by June 29, before the July 4 recess.

Though the Democrats' stalling tactics are unlikely to prevent the vote planned one week after the 142-page bill's unveiling, they took turns pummeling the long-awaited ACA repeal-and-replace plan after its release Thursday.

Former President Barack Obama defended his signature health care bill in a Facebook post, saying the Senate bill was "not a health care bill," but a "transfer of wealth from middle-class and poor families to the richest people in America."

"It remains my fervent hope that we step back and try to deliver on what the American people need," Obama wrote.

Sen. Elizabeth Warren (D-Mass.) condemned the AHCA as a "monstrosity of a bill" and said Senate Republicans had drawn up "even meaner ways to kick dirt in the face of American people and take away their health insurance."

"Senate Republicans know exactly what they are doing with this health care bill," Warren said in remarks on the Senate floor. "Their values are on full display. If they want to trade the health insurance of millions of Americans for tax cuts for the rich, they better be ready for a fight. Because now that this shameful bill is out in the open, that's exactly what they're gonna get."

Sen. Kamala Harris (D-Calif.) echoed Warren, describing the AHCA as a bill that would benefit millionaires at the expense of everyday Americans' health care.

Sen. Chris Murphy (D-Conn.) said the Senate bill was in some respects "dumber" and "more evil" than the plan that passed the House in May. That plan would kick 23 million Americans off their health insurance, according to a CBO analysis.

Sen. Bernie Sanders (I-Vermont), who caucuses with Democrats, described the bill as "by far the most harmful piece of legislation I've seen in my lifetime" and called on his colleagues to "rally millions of Americans against this disastrous bill."

Protesters stormed McConnell's office Thursday as the bill was released; demonstrators, including some in wheelchairs, were forcibly removed from the scene.

A number of groups opposed to the AHCA released statements condemning the Republican health care plan and urging action against it — including Planned Parenthood, whose federal funds would be cut for a year under the bill.

Faiz Shakir, national political director at the American Civil Liberties Union, called the bill "heartless" and noted that it would disproportionately impact people of color.

"The Senate's proposal is not fundamentally different from the House's approach," Shakir said in a statement. "The end result is that it will endanger the lives and liberty of many Americans. Congress must reject this bill and vote with Americans’ future in mind.”

Sen. Dick Durbin (D-Ill.) said on the Senate floor that Americans do not want the bill, which he described as an attempt by the Senate to "dust up the edges of the House bill and say this is not as mean."