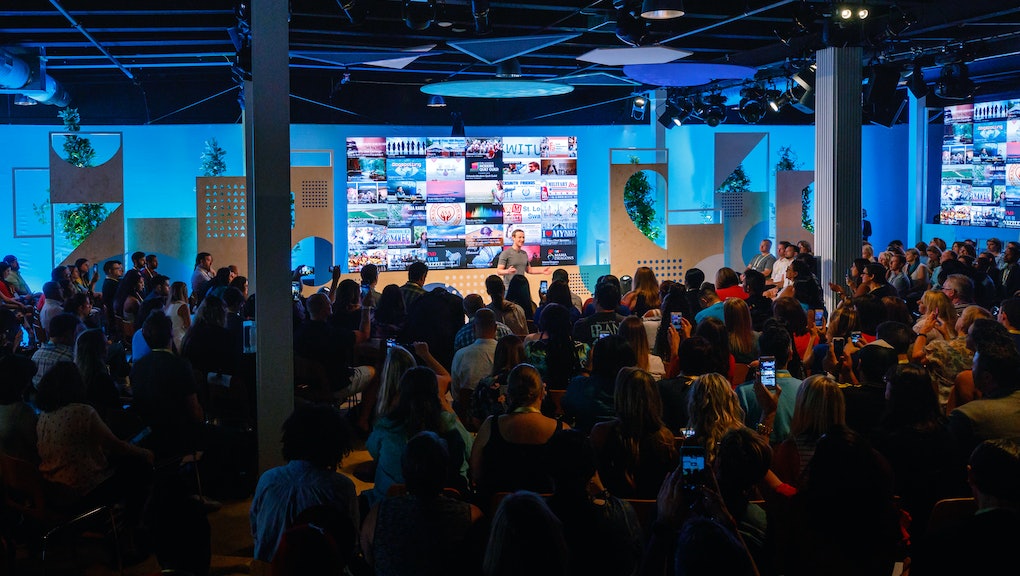 How Mark Zuckerberg wants to transform society through Facebook Groups

CHICAGO — On Thursday morning at Facebook's first ever Facebook Communities Summit, CEO Mark Zuckerberg announced a fundamental shift in the company's mission before a crowd of about 300 leaders of Facebook's most powerful groups.

"For the past 10 years, our mission has been to make the world more open and connected," he said, "But today we're expanding our mission to ... 'bring the world closer together.'"

Zuckerberg said that he used to think that if Facebook just gave people a voice and helped them connect, that was "enough," but recently he has changed his mind. Rather than simply helping users find and connect with each other, he wants to help them find and build meaningful communities.

Zuckerberg said he believes that if Facebook can help foster stronger bonds among its nearly 2 billion users, the platform can help tackle major issues such as ending poverty, curing diseases, fighting climate change and stopping violence around the world. "There's no single country that can do this alone," he said, "so we need to find ways to bring people closer together to achieve this."

This new mission will set Facebook's course for the next decade and the key to putting his plan into action: Facebook Groups.

The goal of Facebook's first Communities Summit, which was announced in April, was to make it clear to influential Facebook Group leaders that Facebook valued them and the engagement they bring to the platform.

The Group leaders attending the summit were hand-selected by Facebook and represented high-profile groups such as Pantsuit Nation, the March for Science and Female IN. Collectively, these group admins boast a total membership of over 9 million users and have contributed nearly 6 million posts and photos to the platform, generating more than 358 million reactions.

Throughout the two-day summit, Facebook plans to teach these leaders how to better manage their membership base and utilize new tools, which Facebook hopes will help Groups gain even more prominence on the platform.

Though Facebook has only recently begun to recognize the power of Groups, many of Facebook's 2 billion users around the globe have seen their lives transformed by the product. As Zuckerberg spoke, he called out some of these users.

"Pamela, she started a group called I Am Adopted," he said. "It helps connect adopted people with their birth parents, and thousands of parents and children have been reunited."

Later, on the same stage, Zuckerberg hosted a panel with the founders of Mommy2Mommy, a new mothers group, Female IN, a group focused on women's empowerment, and Esposas Militares Hispanas, a military spouses group. They all discussed the "life-changing" benefits of Facebook Groups.

On order to cater to these power users, Facebook announced a new suite of tools that will help group admins and moderators manage their flocks. One is an analytics dashboard for admins that shows real-time stats on member growth, engagement and membership. Another tool is membership-request filtering to help admins sort requests. Group admins and moderators can also now schedule posts and link sub-communities via group-to-group linking. In order to keep conversation in groups fruitful, Facebook introduced "removed-member clean-up," which allows admins and mods to remove a person and the content they've created in one step.

Facebook hopes that introducing these new tools will help some of the largest communities on the site grow.

Why Groups are key to Facebook's future

As I wrote in May, part of the reason Facebook groups are so powerful and sticky is that, in Facebook Groups, the focus is on connection between users, not the consumption of content.

As Facebook has transformed itself into more of an internet portal than social network, the platform has become less and less personal. People now seem to go on Facebook primarily to engage with content, not other humans, and this has posed a problem for the platform.

Facebook users have been sharing fewer personal updates on the platform over the past few years; even baby photos seem to have a hard time competing with Trump-themed clickbait in the news feed. New products like Facebook's highly anticipated video tab, full of long-form shows and premium video content, will only exacerbate this gulf.

But in Facebook Groups, the company may see salvation.

Over the past 10 years, Groups have become one of Facebook's most popular features. According to the company, more than 1 billion users around the world are using Groups, that's over 50% of Facebook's total user base. The company also reports that 100 million people are members of “meaningful groups," defined by Facebook as groups that are a very important part of a user's experience.

By building out its Groups product and encouraging users to build more personal connections from the ground up, Facebook hopes to not only boost its engagement rate and time spent on the platform — it also hopes to make money.

But before beginning to monetize Groups users, Facebook needs to keep them coming back. The company hopes that as groups on Facebook play a larger part in user's social lives, the platform can act as the tie that binds communities together.

"I often find more value in a community of strangers than I do in one of friends," CNN Tech's Selena Larson wrote last June in a piece titled "On a social network that is increasingly anti-social, Facebook groups may be our only hope."

"Facebook groups are something of a respite from the loud and often overwhelming deluge of information we get on Facebook," she said.

When users do want to consume information, Groups allow them a more tailored experience. Previously, the default way of expressing interest in something on Facebook was by liking a page. Now, Facebook hopes, users will do so by joining a community.

When content is shared in a Group, only members can comment. When content is shared to, or appears in, a user's news feed, anyone is free to comment — no matter how ignorant, crude or hurtful the message is. It's for this reason Facebook comments often devolve into arguments devoid of thoughtful commentary.

The big problems with Zuck's plan

Zuckerberg's goals are lofty, but his strategy is far from perfect. The most glaring problem with his grand plan to build community around the world is the somewhat faulty notion that all community is good community.

As any Reddit user or casual netizen can attest, bringing people together around a common cause and allowing them to build a strong community among themselves does not mean that community will do good. Often, what bonds people together is shared hate or animosity, frequently toward a marginalized group. Look at the men's rights movement or the numerous communities centered on Gamergate. One of Reddit's most vocal online communities, /r/The_Donald, is famous for a controversial atmosphere that has condoned racism, sexism and white nationalism.

What happens when these communities begin to proliferate on Facebook?

Alex Deve, Facebook's product management director who works on Groups says that Facebook will combat these type of negative groups by utilizing advanced AI to scope them out. If they violate the company's community guidelines, the groups will be removed. However, how Facebook plans to roll out this moderation en mass remains unclear.

Another frequent criticism of Facebook is that the platform creates a filter bubble, showing users only opinions and content that reaffirms their beliefs. As Facebook Groups multiply and further segment users by interest and belief system, it's easy to imagine that groups could silo people even more.

Facebook could also face challenges in relation to privacy expectations. Many Facebook users joined the platform years ago when the social network was more private and based on digitizing "real-life" connections.

As more people build connections from the ground up on the platform, protecting their personal information could prove challenging.

There's also the issue of the Facebook itself serving as the backbone of community in our society. Zuckerberg spoke a lot on stage about how people's memberships in communities has been on a downward slope, and he's right. Fewer people than ever belong to service organizations, church membership is down across many parishes and Americans' engagement in civic organizations in general is declining. Several studies have found that large groups of people are lonelier than ever.

Mark Zuckerberg's solution to this problem is for people to join Facebook Groups. And while some Facebook Groups have clearly provided an amazing support system to millions of users, a recent study found that frequent Facebook use can actually make you more depressed.

But for a minute, let's assume that Facebook Group usage is an explicitly positive force in people's lives, as is certainly the case for many admins at today's Communities Summit.

What does it mean for those who object to a large tech conglomerate using life events to milk them for data?

As Facebook seeks to execute against its new mission, these are clearly some issues it will be forced to address. In the meantime, Group leaders at the Communities Summit remain optimistic.

A'Driane Nieves, founder of Tessera Collective, a support group for women of color living with mental illness says that she has ultimate faith in the platform to resolve any potential issues.

"They do want to course correct," she said. "Their mission is changing and I'm actually kind of surprised and impressed by that. Facebook does have a lot of problems but I do think they're thinking differently and trying to help people. I really do think they care."