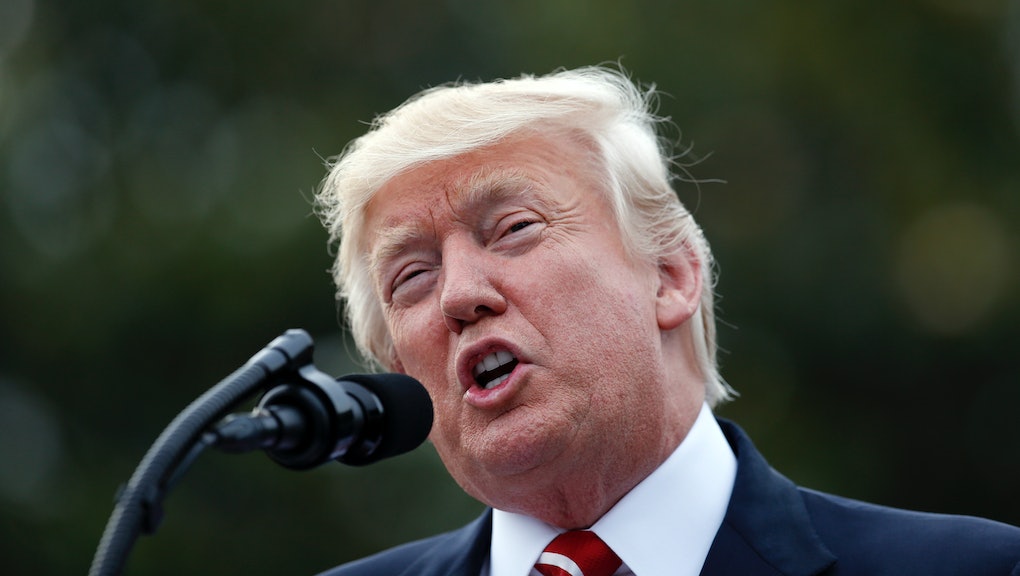 Donald Trump on the Senate health care bill: "I think we're going to get there"

This is Mic's daily read on Donald Trump's America. Welcome to the political newsletter that needs you to understand Medicaid could be forever changed in less than a week. Want to receive this as a daily email in your inbox? Subscribe here.

In his first interview in weeks, President Donald Trump told Fox and Friends he's cautiously optimistic Congress will pass health care reform: "It's that very, very narrow path. But I think we're going to get there.”

That still remains very, very unclear in the Senate. The most conservative wing of the Republican caucus is pushing for major changes to the health care plan unveiled Thursday. Four Republican senators, led by Sen. Rand Paul (R-Ky.), are demanding a bill that, said Paul, “looks more like a repeal of Obamacare.” That could alienate moderate senators like Sen. Susan Collins (R-Maine) and Cory Gardner (R-Colo.), though their opposition so far has been less staunch than the conservative bloc.

Sen. Ron Johnson, another holdout on the bill, expressed concern with not having the time to evaluate the Republican proposal. "My constituents in Wisconsin have to review the bill ... and we actually have to get the information that we don't have yet," Johnson said.

The bottom line: Senate Majority Leader Mitch McConnell (R-Ky.) is nowhere near 50 votes yet. But that doesn't mean he won't get the votes. Thursday was day one, with a week or so to go until the vote. "If anyone can get them, it's him," Politico wrote.

Of note: More Americans support the Affordable Care Act than the House health care bill. That means Democrats have effectively branded the proposals from the Republican Congress as bad for America. Watch for what that will mean in 2018.

Here is Mic's key coverage of the Senate bill:

People with disabilities stormed McConnell's office to protest the bill's cuts to Medicaid. They were arrested and escorted out. Story. Video.

We break down why your health care costs could rise under the Senate plan. And here’s why the Senate plan would be great for rich people — and devastating for poor people.

Today's question: Is Republican opposition to the Senate health care bill real? Or is it political posturing? Email us at trumpsamerica@mic.com.

Other must-reads on the Senate plan:

Winners and losers under the Senate health care plan (Politico)

Opinion: Senate Republicans ready themselves for a massive theft from the poor. (Washington Post)

Opinion: The draft bill contains many conservative victories, which is why the left hates it. (Wall Street Journal)

Barack Obama: “The Senate health care bill … is not a health care bill. It’s a massive transfer of wealth from middle-class and poor families to the richest people in America.”

Trump is less than thrilled with Robert Mueller

In that Fox and Friends interview, Trump called Mueller's friendship with former FBI Director James Comey "bothersome." "But there's been no collusion, no obstruction, and virtually everybody agrees to that," the president said. "Robert Mueller is an honorable man and hopefully he'll come up with an honorable solution."

The president has done himself major damage with his firing of Comey and attacks on Mueller. Trump faces an obstruction of justice investigation over his now-infamous conversations with Comey. A substantial majority of Americans said in a recent CBS poll that they trust Comey's version of events more than Trump's, with a vast majority saying Trump should not interfere with the special counsel.

Overall, Trump's approval rating, according to FiveThirtyEight, is still hovering around 38%.

In a sit-down with the New York Times, House Minority Leader Nancy Pelosi (D-Calif.) all but dared her opponents to fight an open battle over her leadership of House Democrats: "Everybody wants leaders. Not a lot of people want to be led."

The Obama White House discussed many options for how to punish Russian President Vladimir Putin for trying to help elect Trump. The Washington Post has the inside story.