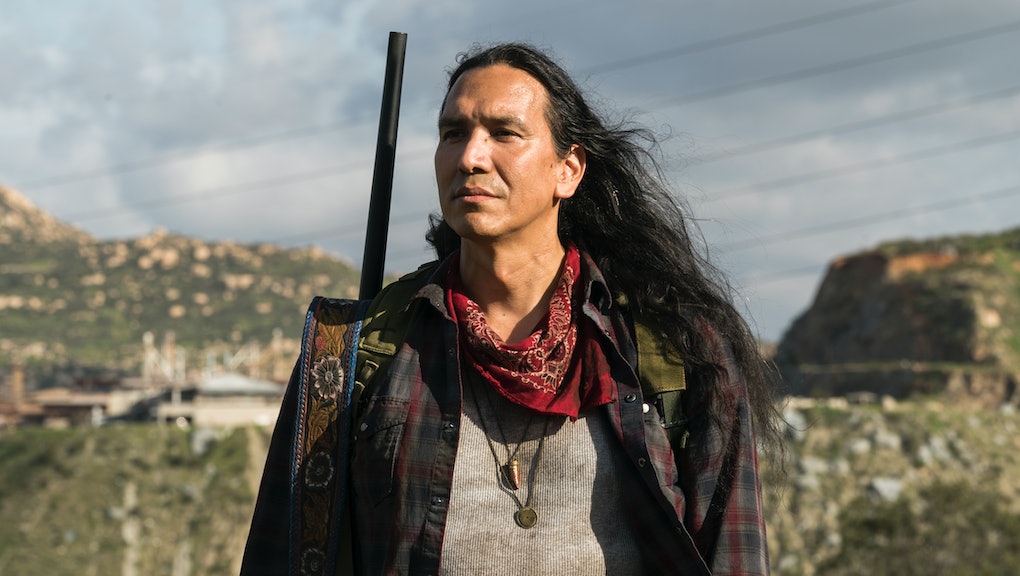 After catching up with Daniel Salazar in episode four, Fear the Walking Dead returns to the Broke Jaw Ranch in episode five to introduce a new threat to the survivors. Before we get to the surprising twist, let's break down some of the other key moments from the fifth episode of the AMC series' third season:

Burning down the house

Episode five begins with a fire at the Broke Jaw Ranch, but it's not caused by an outside attack. A husband wakes up to find that his wife has turned into one of the infected in her sleep. Fortunately she doesn't have her teeth in, so she can't bite into him. The husband doesn't want to put his wife down alone, though. He holds her close and puts a gun to his head. In a quick moment they're both gone — and knock over a lantern in the process. Their home goes up in flames and there's nothing that the other survivors can do about it.

The death of the couple is emotional for the Otto family, who were close to them. And the burned home also has sentimental value. It's been on the Broke Jaw Ranch property for years, and it's even where Jake was born. The only reason that Jeremiah himself didn't live there was because it was too quaint for his second wife.

But the fire and the death of the couple also means something to Nick, who is working on rebuilding his life with Luciana. Jeremiah finds Madison's son scrubbing down what's left of the structure. The two bond over their struggles in life and actually appear to have a lot in common. Although Nick doesn't get into his history with drugs, Jeremiah confesses the truth about why he quit drinking. Forgetting he locked his young son in a basement didn't do the trick, but an accident while hunting deer did make him put down the bottle.

"Damn near blew my dick off," he tells Nick.

While Nick is pulling himself together and trying to start over, Alicia is the one spiraling out of control. She can't get over the things she's seen and done and turns to Jake for a quick hookup.

It's a relationship that attentive viewers definitely could've seen coming after the two escaped in the helicopter together, but Alicia's lost and not looking for anything serious. It's not clear what Jake wants, but he can see that she's struggling.

Post-romp, Jake tries to give Alicia a book of poetry. "What's the point?" she says, refusing to take the book.

Jake later takes her to a nearby lake to try to explain that there is something "greater to live for." Alicia just needs to find out what that is.

With Alicia and Nick safely at the ranch, Madison accompanies Troy and some of his men on a mission to check on a group that was supposed to return to the ranch. Troy's men don't believe that Madison can keep up with them, but are pleasantly surprised when she holds her own while helping take out a bus full of infected prison inmates.

Even though she proves that she can handle herself in this new world, Troy doesn't think that she'll be ready if they have to face the living. That gets tested sooner rather than later. They arrive at the outpost to find that their men have been thrown into a pile and burned — but there is one survivor. An older gentleman is tied to a chair and reciting a rhyme while a crow picks at his head: "When I came home at three, the man was waiting there for me."

Troy's men get sick when they approach the old man. Yes, he's alive, but he's been scalped. The crow is eating his brain.

Madison steps forward and puts the man out of his misery, an act none of the others have the stomach to do. She warns them that they have to go, but by then it's too late.

"You only just got here," a mysterious man says as he approaches them.

Madison, Troy and the others are surrounded by a group of Native Americans who are there to defend their land. Led by a man named Qaletaqa Walker, they're the ones responsible for shooting down the helicopter and killing Travis. The twist is that Troy and Qaletaqa seem to already know each other.

Did they know each other before the apocalypse? It's not clear, but Qaletaqa and his tribe are not messing around. They confiscate the guns, vehicles and boots that belong to Madison, Troy and the others and warn them to abandon the ranch. According to Qaletaqa, "The land you live on needs to be returned." He tells them to leave or he'll feed them all to the crows.

It's a difficult journey back without their weapons, cars or boots, so Madison makes a demand. She tells Qaletaqa that they'll relay the message to the others at Broke Jaw Ranch, but that they need water to get back. The negotiation works, but Troy is not happy. And the situation intensifies when the men begin to slow down from pain on their hike back home.

None of the men have the guts to speak up to Troy when their feet hurt from walking barefoot. Madison steps up and butts heads with him when she demands that he let his men rest. Troy listens, but Madison's insubordination almost costs her her life. She wakes up in the middle of the night to find Troy on top of her with a knife to her throat. Troy doesn't go through with it, but it's still disturbing to watch — especially since another one of the men sees this but doesn't speak up.

Nick's been having a hard time juggling his family and girlfriend. Luciana still can't forgive Troy for what happened to her and doesn't trust the rest of the survivors at the ranch. She's putting the pressure on Nick to choose between leaving with her or staying behind with his family. It's a choice he's struggling to make, and he tries to convince her to stay by planning a romantic evening inside what remains of the home that burned down. The gesture and talk of a future isn't enough to keep her there. When Nick wakes up in the morning, he discovers that Luciana is gone.

Episode five also checks in on Strand and Daniel. The two men leave Lola in charge at the dam to drive to the hotel that Strand said Ofelia was at. Strand warns Daniel that Lola is vulnerable to attacks, but Daniel doesn't care. He's determined to find his daughter — or at least get Strand to admit that he lied about knowing where she is.

Strand is afraid of Daniel and makes multiple attempts to warn him that Ofelia isn't there. Yet when they arrive at the hotel and discover that there is no longer a gate or a guard, Strand still can't admit that he lied. Instead he drives them inside the grounds. He knows that nothing good can come from them being there, but he's so fixated on protecting himself that he's willing to risk it. Ultimately, he ends up confessing to Daniel that Ofelia did go to the hotel, but took off in their van and left Alicia for dead. Daniel decides to do the same to Strand. He pushes Strand into the infected and takes off with his convertible. Strand somehow makes it out of the hotel without getting bit, but it's unclear where he'll go from there.