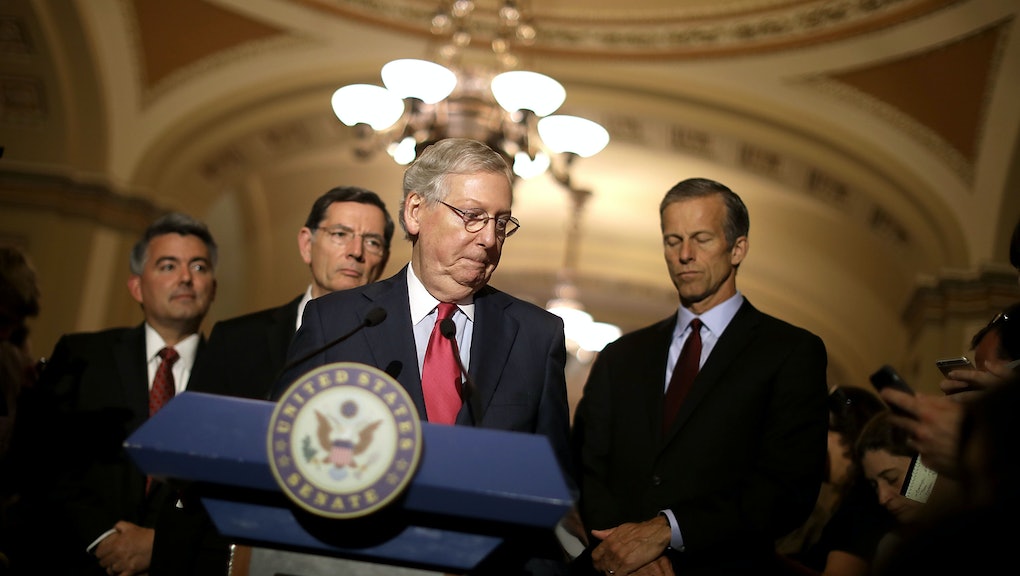 Republican a potential Democratic-majority Congress could pass a single-payer health care plan if the GOP bill to repeal and replace the Affordable Care Act fails in the Senate, Politico reported Thursday evening.

"If we don’t get this done and we end up with Democratic majorities in '18, we'll have single-payer," Sen. John Thune (R-S.D.) told the publication. "That's what we'll be dealing with."

The GOP worries over a possible shift to a single-payer system in the future were reported after Senate Republicans finally revealed the health plan they had spent weeks drafting behind closed doors.

The Republican leaders' fears underscore their make-or-break mentality on what they're calling the Better Care Reconciliation Act ahead of an expected vote next Thursday — and the seismic shifts in policy that are possible as the debate over health care becomes increasingly politically polarized.

"The health care debate mirrors the overall split in politics these days," Melissa Thomasson, Julian Lange Professor of Economics and director of graduate studies at Miami University, said in an email interview with Mic.

"It's a referendum on the GOP agenda, and I think that positions it to be either single-payer ... or 'free market,'" Thomasson continued, adding that a "true free market is impossible" in health insurance.

Republicans have repeatedly called the ACA a "failure" and President Donald Trump promised to replace it with a plan that has "heart".

But the bill revealed by Senate Republicans Thursday — which would cut Medicaid, eliminate the individual and employer mandates and allow insurers to charge older Americans more for their health coverage — was condemned as "heartless" and "mean" by Democrats, who characterized the plan as one that would benefit the rich at the expense of everyday Americans' health care.

According to Thomasson, part of the reason the debate over the health system has grown so intense is due to the increasing costs of health coverage and the necessity of having insurance.

"Being uninsured today is a lot different than it was in 1985, for example," Thomasson said.

As a result, according to Thomasson, the Republican plan — which is similar to the House plan that the Congressional Budget Office estimated would kick 23 million people off their insurance — could actually lead to more support for a single-payer system.

"I find it curious that Sen. Thune thinks 'this happens or single-payer happens,'" Thomasson said. "We can see what the CBO scores suggests, but I think that there is a distinct possibility that if the BCRA causes people to lose insurance [that] could itself be a road to single-payer."

Indeed, Dr. Steffie Woolhandler — a professor at Hunter College and co-founder of Physicians for a National Health Program — told Democracy Now! Friday that support for single-payer already seems to be growing.

Senate Majority Leader Mitch McConnell is hoping for the Republican health plan to be scored by the CBO by Tuesday and to hold a vote on the 142-page bill Thursday — before the July 4 recess.