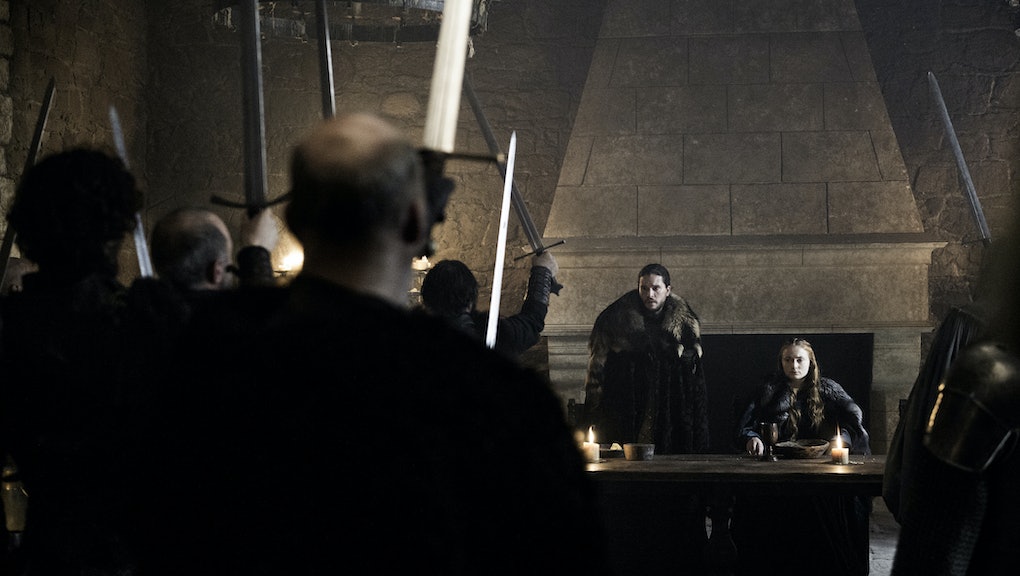 It has been an extremely long layoff, but Game of Thrones will soon return to HBO for its highly anticipated seventh season. Judging from the trailers and images that have been released thus far, season seven will be action-packed, perhaps featuring more than a few massive battles. And this should not be too surprising, as season six ended with several major conflicts on the horizon.

It has been more than a year since Game of Thrones aired an episode, so fans can certainly be forgiven if they do not remember everything that transpired in season six. While the big moments for the most part probably stand out, the HBO series covers so many different storylines each year that very few could be expected to remember them all with perfect clarity.

So, to make sure we are all fully prepared for what is sure to be seven (yup, not 10) awesome episodes of Game of Thrones, here are six of the storylines to remember from season six.

1. Jon Snow, the King in the North

Jon Snow's situation at the end of season six is certainly a whole lot more favorable than the position he was in at the conclusion of the previous year. In the season five finale, the then-Lord Commander of the Night's Watch was stabbed to death during a mutiny. Those holding out hope that he may have survived the encounter were surely disappointed when the season six premiere revealed that he was indeed dead — well, at that moment.

Of course, Snow's story was far from over, and not long after, he was resurrected by Melisandre, aka the Red Woman. Once brought back to life, Jon, along with Sansa Stark, teamed up with the Wildlings and other willing partners in the North, like Lady Mormont, to reclaim Winterfell, which was being held by Ramsay Bolton. In the extremely thrilling Battle of the Bastards, Bolton's army was defeated, and Jon was later named the King in the North.

There is a threat to Jon's power, though, lurking in the shadows. And no, this is not a reference to the White Walkers. Jon was only able to defeat the Bolton army after he was joined by the Knights of the Vale, who participated in the battle at the behest of Petyr Baelish, aka Littlefinger. Here's the issue: Littlefinger is only ever looking out for himself. And after the battle, he tells Sansa that every move he makes is with the intention of eventually taking the Iron Throne, with her as his queen.

Basically, Jon should keep one eye on Littlefinger at all times during season seven and beyond.

Few Game of Thrones characters, if any, have experienced the kind of pain that Sansa Stark has had to endure: She was engaged to King Joffrey, the psychopath who ordered the beheading of her father; was then forced to marry Tyrion Lannister, a man she didn't love; and finally, after believing she was free, was given over to Ramsay Bolton, another psychopath who raped and abused her both physically and mentally.

So, when Sansa finally got her revenge on Ramsay — by feeding him to his own starving dogs — it is probably safe to say that many fans celebrated. And this act from Sansa, and her rise to power alongside Jon Snow, could signal the beginning of a new evolution for the character.

"She's seemingly in control for the first time — and it really suits her," actress Sophie Turner told Entertainment Weekly. "She's kind of having a bit of a power trip. But she's also becoming more insecure, because there are threats to the power that she holds."

As previously mentioned, one of those threats could surely come from Littlefinger.

"Sansa is becoming as bright as [my character] and just as wary of [his] manipulations of her," Littlefinger actor Aidan Gillen told Entertainment Weekly Wednesday. "They're onto each other. They use each other. They enjoy each other. And they keep a lot from each other."

Before we move this discussion too far away from the Red Woman, it is probably important to note one particular scene from season six that many likely found shocking. Early on in season six, it is revealed that the priestess Melisandre is actually much older than she seems — like much, much older.

The moment in question happened at the end of the season premiere when Melisandre undressed in her Castle Black chambers. Moments after removing her necklace, she transforms into a frail, old woman. Despite the shocking nature of the reveal, and countless questions it probably elicited from viewers, the Red Woman's age is not once alluded to during the rest of the sixth season.

Still, learning that Melisandre is not exactly who she seems is far too important to never address again. So, it is fairly safe to assume that in season seven, or perhaps eight, the Red Woman's age will become relevant.

In Game of Thrones' explosive sixth season finale, Cersei Lannister was given a new, and enormously long, title: Cersei of the House Lannister, the First of Her Name, Queen of the Andals and the First Men, Protector of the Seven Kingdoms. How did she come by such prestigious recognition? She killed virtually every one of her enemies in Kings Landing.

Rather than go to her trial at the Great Sept of Baelor, Cersei unleashes a devastating attack of wildfire that results in the death of the High Sparrow, as well as Loras and Margaery Tyrell. The latter's death leads King Tommen to commit suicide, leaving Cersei as queen and thus fulfilling part of Maggy the Frog's prophecy — that she would one day be queen.

But Maggy's prophecy also states that a younger, more beautiful queen would eventually come and take Cersei's place. With Margaery Tyrell dead, it certainly seems like that younger beauty will be Daenerys. And that confrontation could soon happen, because the Mother of Dragons is on her way to Westeros.

For six seasons Daenerys Targaryen has been talking about claiming her rightful place atop the Iron Throne. But through the first five, the Mother of Dragons had not actually set sail for Westeros. That all changed in the season six finale, as Daenerys, Tyrion and a rather large army finally began their journey across the Narrow Sea.

In order to take over King's Landing and usurp Cersei's rule over the Seven Kingdoms, Daenerys has to come prepared for a fight, and she is not leaving anything to chance. Near the end of season six, she makes several alliances that have resulted in an even larger army and naval fleet.

In addition to joining forces with Theon and Yara Grejoy, who fled the Iron Islands to escape their uncle Euron, Daenerys has entered an alliance with two families that hold quite the grudge against the Lannisters. Thanks to some scheming from Varys, Olenna Tyrell and Ellaria Sand also pledged their respective armies to Daenerys' quest to take over the Iron Throne.

House Tyrell and Sand's forces from Dorne join an armada that also includes the Dothraki, whom Daenerys recruits early on in the season, and the Unsullied warriors, whom the Mother of Dragons freed several years ago, and have been loyally with her ever since. Oh, yeah, she also has three healthy and extremely large dragons. Let's just say we shouldn't bet against Daenerys Targaryen.

After not appearing in a single season five episode, Bran Stark returned to Game of Thrones in a major way during season six. When we catch up with the young Stark, he is training with the Three-Eyed Raven, which consists of the pair sharing visions of the past. These visions provided quite a bit of insight into the history of some the series' most important characters, like Jon Snow.

Bran's final vision of the season comes after he becomes the Three-Eyed Raven, and takes him to the Tower of Joy, where Ned Stark had just located his sister Lyanna. There, it is revealed that Lyanna had given birth to a son. And in a moment that probably shocked those that do not read the books, or frequent Game of Thrones Reddit threads, we learn that Jon Snow is not Ned's son, but Lyanna's. And Jon's father is none other than Rhaegar Targaryen, the Mad King's son.

Bran's powers also play a role in the backstory of another beloved character: Hodor. We learn in one of Bran's earlier visions that Hodor was once a young, seemingly talkative, stable boy named Wylis. As it turns out, Wylis' mind is damaged when Bran recklessly warged into him while trying to escape the White Walkers. And because Meera was screaming "hold the door," while Bran was linked with Wylis, the phrase is slurred into "Hodor."

It is probably not a stretch to assume that during Game of Thrones' seventh season, Bran's command of his powers will continue to increase, which could play a significant role in the eventual battle against the White Walkers. And they might be the true threat to look out for in the upcoming seasons.